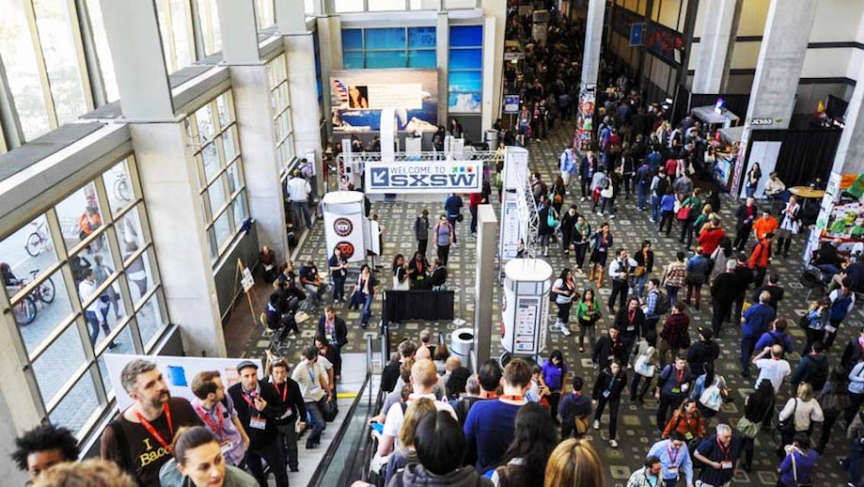 The convention center at South by Southwest Interactive 2014 in Austin, Texas. The event draws some 30,000 conference-goers and has become a central location for technology startups to network and raise funds.

Here's how many entrepreneurs start their companies: They begin by financing themselves, burning through savings or working for little pay. Then they go to friends and families for small investments to get up and running. Their third and fourth rounds of funding often come from angel investors or venture capitalists.

It's called boot-strapping and it's a time-honored tradition for entrepreneurs who attend the mega South by Southwest (SXSW) Interactive conference, held every March in Austin, Texas. But Rebecca Gonzales, a marketing and technology entrepreneur in Austin, says this funding model often puts women and minorities at a disadvantage.

SXSW Interactive, which ended Tuesday, paid special attention to Latinos this year, with a set of panels hosted outside the main convention center and open to the public. Gonzales spoke on a panel about Latinas in technology.

The Pew Research Center has documented striking gaps in the wealth of blacks and Latinos compared to whites in the US, which in turn affects how many minorities can actually afford the extra time, risks and capital needed for startups. According to research firm CB Insights, whites made up 87 percent of the founders of Internet companies that received venture capital funding in 2010. Asians were 12 percent, leaving 1 percent for blacks, Latinos, Native Americans and other groups.

"Someone said it so perfectly [at SXSW Interactive]," says Gonzales. "Boot-strapping? We're boot-strapping our whole lives."

If you don't have a seat at the table: Bring Your Own Chair. --@MidyAponte #newGenY #sxsw

That was true for Liliana Aide Monge, an entrepreneur in Los Angeles. She started the coding boot camp Sabio with her husband. The business caters to women and Los Angeles communities that often do not have computer science as part of their curriculums. She saw a large market there, of people underrepresented in the technology industry who really wanted skills to build new careers. She spent six months trying to raise capital from nonprofits, foundations and technology firms, but found it difficult because she was often approaching potential funders cold.

"We don't have the friends and family who have the money, or run the organizations to give the warm introductions," Monge says. Some potential investors were only looking for nonprofits that were providing this kind of training. Others wanted ideas that could scale to a much larger size.

"You have to be in this box. It's always about being in a box," Monge recalls. She ultimately boot-strapped the company with her husband; they both continued their day jobs and financed Sabio themselves.

"It's definitely challenging. My husband and I have two kids. I don't live in the lap of luxury," says Monge, who was born in Mexico and moved to Los Angeles when she was 5. She was raised in South Gate, a largely Latino city south of Los Angeles and wants her business to have impact in communities like it.

The biggest drawback to running Sabio this way, she says, is that without greater capital, they cannot scale their teaching model and offer it to more people.

Mando Rayo runs a multicural advertising and marketing firm in Austin. He's participated in SXSW Interactive since 2008 and has mixed feelings about the Latino "track" at this year's conference. One problem, he said, was that the venue for the track, a hotel almost a mile from convention center in Austin, was too far from the main event and isolated the panels.

"I think it was great that we had it, but it was separate," he says. "The convention center is the hub, and if you leave [to go to the Latino-focused panels] you miss out on other sessions."

And that's an important point because SXSW Interactive is about networking and sealing deals, says Gonzales.

"My focus now is telling SXSW, 'Thank you very much for the opportunity but now here's a thousand panels with Latinos on them that don't need to be on a separate track,'" she says.