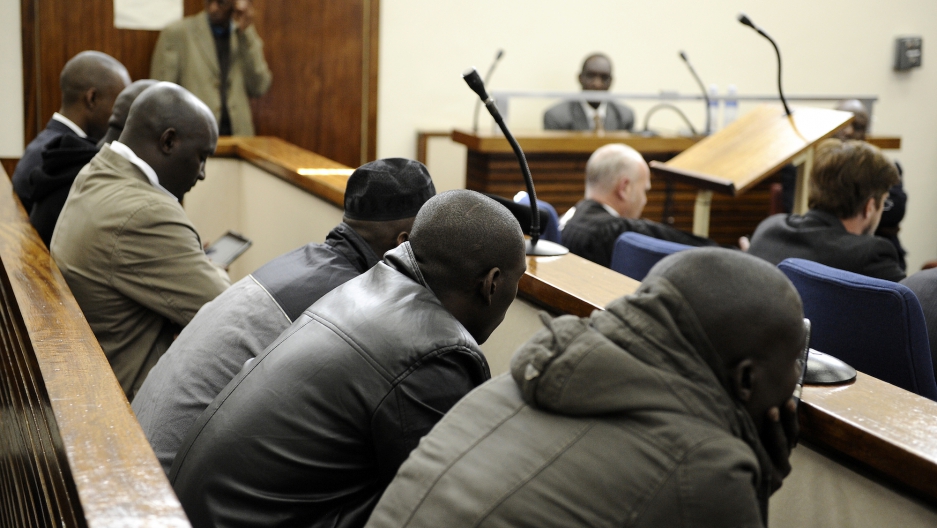 NAIROBI, Kenya — South Africa has issued a warning to Rwanda: stop trying to kill your citizens on our soil.

“As the South African government, we want to send a very stern warning to anybody, anywhere in the world, that our country will not be used as a springboard to do illegal activities,” said Justice Minister Jeff Radebe on Wednesday.

Last week, an armed attack on the South African home of a prominent Rwandan dissident, General Kayumba Nyamwasa, resulted in the expulsion of three Rwandan diplomats whom South African investigators have linked to the attack. Rwanda says it has seen no evidence to support the allegation.

The terrorism charges relate to a series of occasionally deadly grenade attacks in the capital Kigali in recent years. Rwanda also says Nyamwasa has links to the FDLR, a Rwandan rebel group in eastern Democratic Republic of Congo, some of whose members helped organize the genocide that killed at least 800,000 people, mostly ethnic Tutsis, 20 years ago next month.

The latest attack on Nyamwasa was botched — he was not at home at the time — but for South Africa it was the final straw.

Nyamwasa, the former chief of staff of the Rwandan army, survived an assassination attempt in Johannesburg in 2010 when gunmen shot him in the stomach as he drove home from a shopping trip.

Then on New Year’s Eve last year another prominent Rwandan dissident, former spy chief Colonel Patrick Karegaya, was strangled in a hotel room in Johannesburg. Both Nyamwasa and Karegaya were founding members of the Rwanda National Congress (RNC), an opposition group formed in the US in 2010 by former high-ranking members of Kagame’s inner circle.

Their party blames the government in Kigali for the 2010 attempt on Nyamwasa’s life, the murder of Karegaya and the recent attack on Nyamwasa’s house, but Rwanda dismisses the allegations.

At the same time, senior Rwandan government figures have publicly celebrated Karegaya’s death, accusing him — in what is by now familiar rhetoric in a state founded on the memory of the 1994 genocide — of having betrayed his country.

In comments published on local news websites, defense minister General James Kaberebe said, “When you choose to be a dog, you die like a dog.”

Later that month President Kagame addressed a prayer breakfast. “You cannot betray Rwanda and get away with it. There are consequences for betraying your country,” he said.

According to translated excerpts published in the fortnightly newsletter Africa Confidential, he added in the local Kinyarwanda language: “It’s a matter of time for anybody trying to undermine Rwanda to face the consequences of their actions anywhere. I do not have to be apologetic about people who forget that Rwanda made them who they are.”

In case anyone doubted what he was talking about, Kagame reportedly said, “It’s the first time I am speaking about the Karegaya issue because there was no need. We don’t seek permission to defend our country.”

On Twitter foreign minister Mushikiwabo added that she would lose no sleep over Karegaya’s demise. “It's not about how u start, it's how u finish. This man was a self-declared enemy of my Gov & my country, U expect pity?” she wrote.

That comment led to a testy exchange with Karegaya’s son Elvis, in which Mushikiwabo displayed no sympathy. The minister faced criticism for her undiplomatic language, but it wasn't the only time the Rwandan government’s embrace of social media has backfired.

After the slip-up last week, the @RichardGolston account was deleted. Rwanda’s presidency tweeted that the “employee in the Presidency” who ran the “unauthorized account” has been “reprimanded."

Attacks on critics, whether verbal or otherwise, seem very much part of Rwanda’s playbook. Countries other than South Africa have accused Rwanda of planning assassinations abroad.

In 2011 two dissidents exiled in Britain, Rene Mugenzi and Jonathan Musonera, each received a letter from the Metropolitan Police warning of “reliable intelligence … that the Rwandan government poses an imminent threat to your life.”

It was reported Thursday that the chairman of the US House Committee on Foreign Affairs wrote to Secretary of State John Kerry this week, encouraging the top US diplomat to reconsider relations with Rwanda given the attacks and Kagame's "violent rhetoric."

The falling out between South Africa and Rwanda could be dismissed as nothing more than an unseemly spat were it not for the fact that South African troops are in eastern Congo, along Rwanda’s western border, as part of a special United Nations brigade deployed last year to fight rebels including M23, a group widely considered to have enjoyed Rwandan support.

Worsening relations between South Africa and Rwanda will only complicate regional and international efforts to bring peace to the war-wracked region.

When the UN "Force Intervention Brigade" helped Congo’s army defeat M23, the majority of the rebels were neither captured nor killed. Instead they found shelter in Rwanda and Uganda — meaning M23 is more dormant than extinct.

As Rwanda prepares for the somber memorials that will mark the 20th anniversary of the genocide, stories of hit squads, diplomatic rows and Twitter spats are not what where it wants the world to focus. But as recent events in South Africa show, controlling things is trickier abroad than at home.