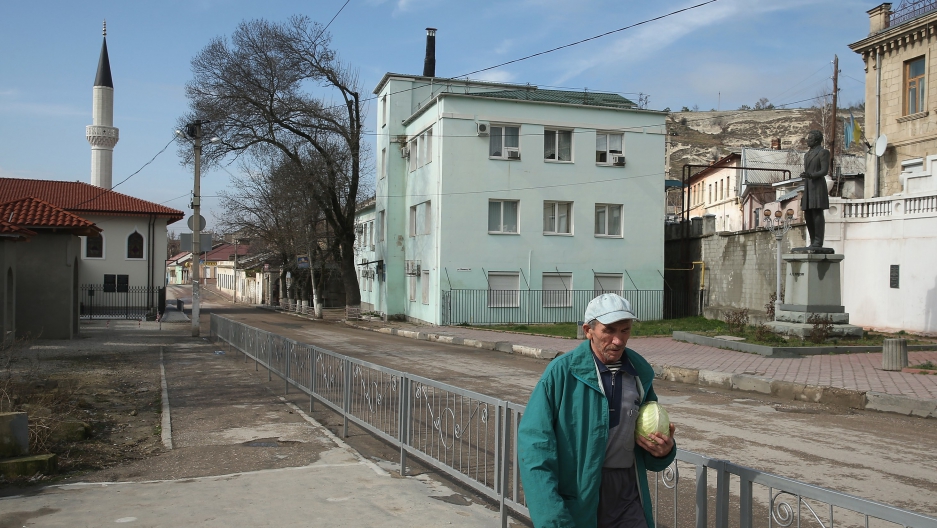 In the past two or so centuries, this tight-knit Muslim group has been colonized by the Russian Empire, deported en masse by the Soviet Union and denied the most basic of rights along the way.

So don’t bother asking them about the threats ethnic Russians claim they face in Crimea.

While pro-Russian separatists with Moscow’s backing have rallied against the “fascist” government in Kyiv they claim aims to crack down on Russian-speakers, the Crimean Tatars say it’s simply another excuse for the kind of aggression that’s haunted them for centuries.

“The Russia media can brainwash the population here and in Russia, but it shouldn’t bother with us,” says Dilyara Seytvelieva, a civic activist here in the group’s historic capital. “We know too well what it all stands for.”

As Crimea speeds toward seceding from Ukraine and joining Russia, the Crimean Tatars represent a lonely bastion of support for Kyiv’s fledgling government.

Although they make up only around 12 percent of the peninsula’s population, their tortured past under Russian rule has fashioned them into outsized opponents of Moscow’s influence.

Deported by Soviet dictator Josef Stalin in 1944, the entire ethnic group — some 225,000 souls — was forced off the land it had called home for centuries and into the barren steppes of Central Asia.

Many returned four decades later, but the memory of exile is etched into every Crimean Tatar.

That’s why they watched with horror this month when thousands of Russian troops seized the peninsula while hordes of Cossacks and Russian nationalists poured in to fuel the region’s secession fever.

The Crimean Tatars are so disturbed they’ve set up their own self-defense forces to guard local mosques and neighborhoods from what they fear are provocations aimed at tarnishing the increasingly fragile peace.

So far, the Moscow-loyal separatists have appeared eager to appease the group by promising them up to 20 percent of government posts and the establishment of Crimean Tatar as the second official language.

But most aren’t buying it.

“We know what Russian imperialism is, and we won’t give into these kinds of bribes,” says Enver Umerov, a municipal deputy in Bakhchysarai and a member of the Mejlis, the Crimean Tatars’ national council.

More from GlobalPost: It may not be a real war yet, but don't tell that to the propagandists

The options from Kyiv haven’t been much better, however.

Crimean Tatars have long complained that their calls for greater recognition have fallen on deaf ears.

They received little state support during the resettlement process after the Soviet collapse.

Umerov and other local leaders also resent the fact that few efforts have been made to incorporate Tatars into the government or devolve any real power to the Mejlis.

Nevertheless, they’ve been stalwart allies for Kyiv, sensing that an independent Ukraine — unaccommodating though it may be — would provide an opportunity to rebuild their fractured nation free from Russian influence.

That loyalty extends even to supporting what pro-Russian politicians here have slammed as a forced “Ukrainization” campaign to shore up Ukraine’s post-Soviet identity.

Provoked by a heavy-handed propaganda drive from Moscow, fears among Russian-speakers in Crimea that the new Kyiv authorities are bloodthirsty, anti-Russian nationalists have helped define the current crisis.

But many Crimean Tatars, themselves Russian-speakers in everyday life, dismiss complaints from their dissatisfied compatriots crying foul over the “fascism” that allegedly threatens their culture in a region that’s already heavily Russified.

“They’re always yelling about how they have the right to speak their language, but no one’s prohibiting them,” said Seytvelieva, who runs a local pedagogical organization called the Teachers’ Council.

Despite high-profile claims to the contrary, Russian-speakers enjoy by far the most privileges in Crimea, she adds.

“Out of some 600 schools in Crimea, 15 are Crimean Tatar and three or four are Ukrainian — all the others are Russian.”

Here in the historic center of Bakhchysarai, a rustic, picturesque hillside settlement reminiscent of the Muslim villages of the Caucasus, there are few traces of the Slavic world, however.

Once the seat of the powerful Crimean Khanate that served as a major Islamic center for 350 years before Russia’s annexation of the region, resettled locals have only recently taken to rebuilding their ancient capital.

On Wednesday evening, as the muezzin called local believers to prayer, small groups of mostly elderly men flocked to a centuries-old mosque destroyed by the Soviets in 1929 and recently rebuilt into a glittering showcase by local Crimean Tatars.

After the prayer, several retired to a room in its courtyard for tea and to huddle around a laptop for reliable news. Days earlier, the pro-Moscow separatists enforced a de facto information blockade by ordering leading Ukrainian television channels off the air.

Useyn, a 57-year-old construction worker, considers what he says would be a dismal future under Russian rule.

“We are Muslims, and I know how they treat us there,” he says. “They’ll find the smallest pretext and all of sudden, I’m a terrorist.”

“I don’t want to live with that kind of fear.”

The muezzin calls out in Bakhchysarai.

More from GlobalPost: Your starter kit for understanding the chaos in Crimea