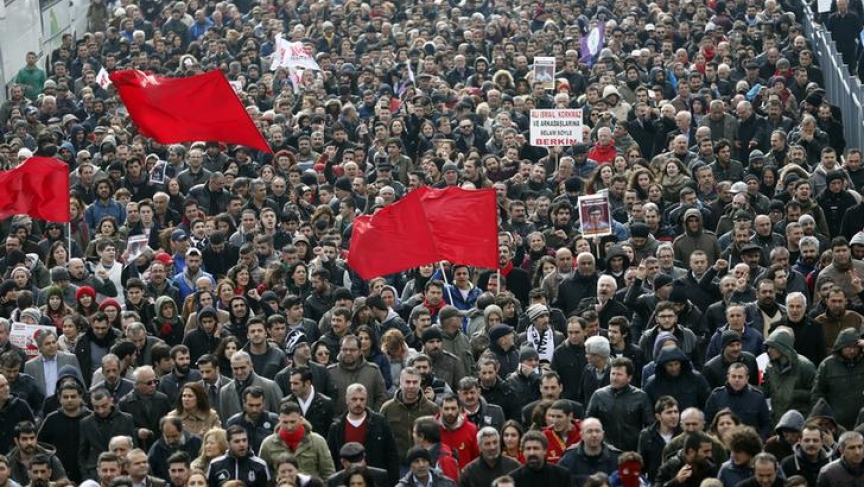 Tens of thousands of mourners, many chanting anti-government slogans, gathered in central Istanbul on Wednesday, March 12, 2014, for the funeral of Berkin Elvan, a teenager wounded in street protests last summer. His death has sparked renewed unrest across Turkey.

The anger of anti-government protesters last summer in Turkey was revived today. The reason was the memorial service in Istanbul for 15-year-old Berkin Elvan, who was badly injured during the summer protests.

Elvan died Tuesday after being in a coma for 9 months. His funeral has inspired tens of thousands to march in cities across Turkey and fueled anger over what is seen as police brutality and overly aggressive tactics to break up street protests.

Some of Elvan's mourners today called on Prime Minister Recep Tayyip Erdogan to resign. They say the prime minister is ultimately to blame for the heavy-handed crackdown.

Journalist Dalia Mortada explains that Berkin Elvan was not part of the protest. "He was sent by his family to go out and get a loaf of bread one morning during the protests, and as he was out, he was hit in the head with a tear gas canister," she says.

"According to a Human Rights Watch report, doctors said he was probably hit at close range, but there's no way of confirming that. He spent the last 9 months in a coma and eventually passed away from complications."

To honor his memory, many protesters carried loaves of bread. And two loaves hung at a the memorial site next to a wreath with Elvan's picture on it.

"It's a very sad occasion for a lot of people," says Mortada, "and we hear how sad it is that a child was killed in all of this and a child that wasn't even participating in the protest. On top of that, people are really angry, so the protests are more sad and angry than energized, as they were in last summer's protests."

Elvan's funeral inspired protests across Turkey and fueled anger over police brutality. "Elvan has become a symbol of police brutality during that time when people had gathered peacefully," says Mortada. "People were shocked that so much tear gas, rubber bullets, and water cannons were used against them when they weren't doing anything violent."

Elvan's very distraught mother spoke yesterday about her son. She said "God didn't take my child from me. Erdogan did," referring to the prime minister. Mortada exlains that "after Berkin Elvan was hit, the police were praised by the prime minister. He called them brave and strong and thanked them for their hard work in dispersing these 'violent' protesters."