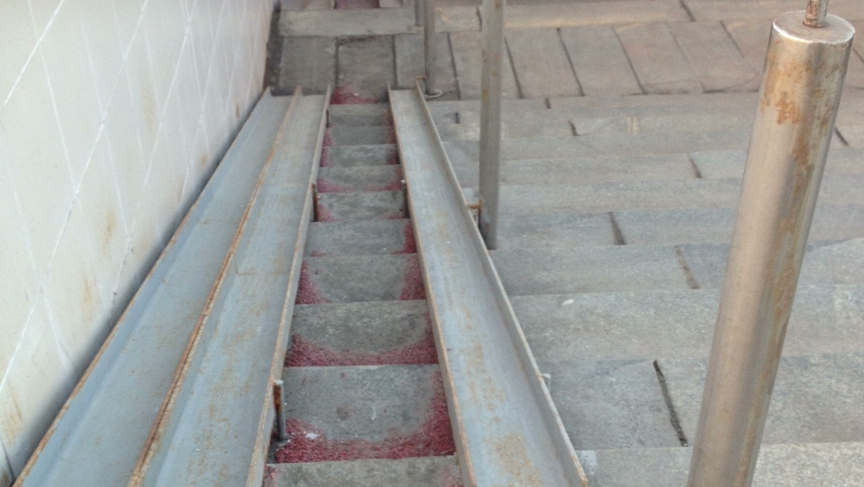 Moscow's pedestrian underpasses technically have ramps, but you wouldn't want to go down them in a wheelchair. Some of them are pitched at a 45 degree angle.

Make no mistake: Moscow is one of the world's great cities.

Red Square still inspires with its onion-domed churches and the sheer magnitude of the place. The city's 80-year-old metro system is still — somehow, even today — an unparalleled Soviet achievement in getting people from here to there.

The city's theaters, museums, and concert halls count among the world's finest.

And yet, says Igor Gakov, these attractions remain all but off limits to people with disabilities.

“These ‘pearls’ of the city, the places people who come to Moscow want to see — they’re not accessible. You can get close, but you won’t go very far," he adds.

Gakov, a native Muscovite who has used a wheelchair for 16 years, says the key to getting around the city he loves is to be fearless and in really good shape — essentially, an everyday Paralympian.

“I’m pretty strong,” says Gakov, “so probably 70 percent of the city is accessible to me. But for others, it may be as little as 20 to 30 percent.”

It’s easy to see what he means. One only need look at Moscow's pedestrian underpasses to see how challenging the city can be for the disabled. The underpasses have ramps, technically, but they’re installed over steps descending at a harrowing 45 degrees.

“No invalids” in the USSR

When the Soviet Union hosted the Summer Olympics in Moscow in 1980, Soviet officials refused to combine it with the Paralympic Games. At the time, a Soviet official famously insisted the USSR had "no invalids."

Russia only ratified the UN Convention on the Rights of People with Disabilities in 2012 (something the US hasn’t done yet) — a long overdue move applauded by human rights groups.

“We’ve been seeing a real push to improve the lives of people with disabilities, at least in Moscow,” says Denise Roza, the American director of the Russian disability rights group, Perspektiva. “We’re seeing it across the country, but in those cities that have more resources, we’re seeing it happen faster.”

Roza says while the situation is far from perfect, progress is evident: Public schools are beginning to accommodate children with disabilities, the disabled are increasingly entering the work force and public buildings are becoming accessible to all.

In a sign of the changing times, the Russian state has lavished attention on these Paralympic Games — especially after Russia’s Paralympians did well in the medal count in the Vancouver and London games. The government has poured money into Paralympic sports programs and advertising campaigns featuring the athletes. Russia leads in this year’s Paralympics medal count as well.

Denise Roza, who was in Sochi for some of the Paralympic games, says the fans have been showing up.

But there is a risk that all these efforts will be eclipsed by Russia’s ongoing dispute with the west over Ukraine. The US and the UK political delegations boycotted these Paralympic Games in protest of Russian intervention in Crimea. The athletes are still competing, though.

At a recent press conference, Russian President Vladimir Putin called these political gestures the "height of cynicism." But as the west and Russia face off over the fate of Ukraine, Russia’s disability rights activists are hoping some of the focus can stay on breaking barriers, rather than redrawing borders.