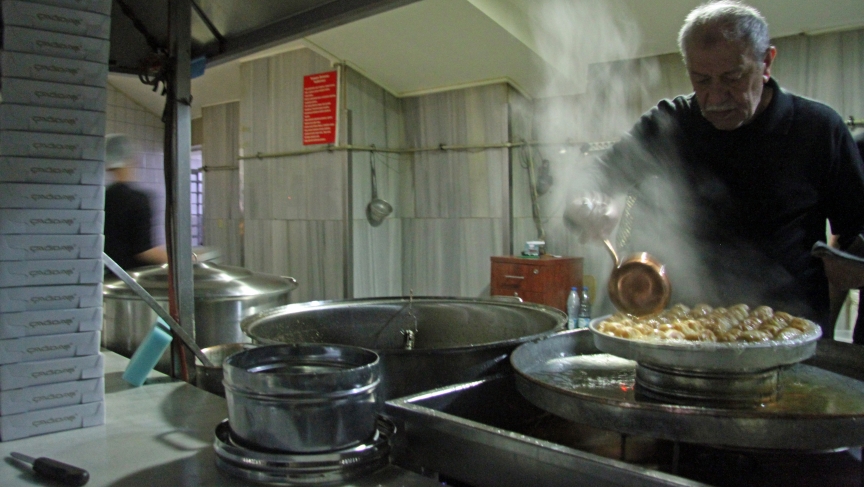 Talet Cagdas, the owner of Gaziantep's Imam Cagdas restaurant, pours a sugary, melted butter mixture over one of the day's first batches of baklava. It's the finishing touch on a labor intensive sweet.

Southern Turkey is pistachio country, and a recent spike in pistachio prices has people here on edge. The nuts harvested in southeast Turkey — and from other pockets along the Mediterranean coast — make the country the world’s third largest pistachio producer, behind Iran and the US.

This is why the people of Gaziantep, in the heart of southern Turkey, take their pistachios so seriously. Cab drivers here brag about them, the nuts are sold roasted and salted for snacking on street corners and they're used in cooking: everything from cakes and chocolates to kebab and soups.

But perhaps the biggest pistachio buyers here are the baklava producers, a proud group who claim the gooey filo dough pastry was invented in Gaziantep hundreds of years ago. Whenever the price of pistachios spikes, it's the baklava bakers who are hit hardest.

One of those scientists is Kamil Sarpkaya. Walking through an orchard just outside his office, he admits that before he moved to Gaziantep, he didnt even know pistachios grew on trees. "I thought they were the same as a ground nut" he tells me. Now, he says, he feels a deep connection to the trees around him.

"I cannot separate myself from pistachios," Sarpkaya adds, in between puffs of a cigarette, his tone turning grave. "For example if any farmer called me from a thousand kilometers away, I'm going there. I love it."

Sarpkaya tells me pistachio farming is a pretty complicated business. For one thing, only the female trees bear fruit. And only every other year. So even small problems with a harvest can have big effects.

But last year was extreme.

Low rainfall and a pest infestation led to a bad harvest. And there was a new factor that sent prices skyrocketing: pistachio speculation. In some cases, pistachio distributors, the middlemen between farmers and consumers, are hoarding reserves and betting on the price to keep going up. So far, it has. Every year.

But now businessmen are also getting in on the game as an investment: buying low, holding back some pistachio stock and then selling high.

And that's why the baklava producers are so panicked. Cevdet Gullu is a sixth-generation baklava maker. His shop is Gaziantep's oldest and it's no frills: simple marble-topped tables and aluminum plates. There is silverware, but Gullu insists the sweet is best eaten by hand. "That way you can taste the butter," he explains.

He says the price of pistachios is on everyone’s mind. “I talked five minutes ago to my pistachio seller," Gullu explains over a plate of baklava, cut into triangle and diamond shapes. "In the last 10 years, prices are really bad for us.”

Gullu says the industry has dealt with the vagaries of nature for generations. But pistachio hoarding — or, as people here call it, “stocking” — is too much. “We tell people, if you know someone stocking, tell them not to stock. It’s not healthy.”

Not healthy, he says, because most speculators don’t store the nuts properly. So when the pistachios make it back into the market, they’re often stale or infested with pests.

Back at the research institute, Sarpkaya, says he wishes these businessmen would have more respect for pistachios, and stop treating them like any old commodity. "What they're doing is very damaging," he says shaking his head.

A strong harvest in the next two years could help the pistachio market correct itself, Sarpkaya says, but aswithout some kind of enforcement, he doesn’t expect the speculators to stop anytime soon.