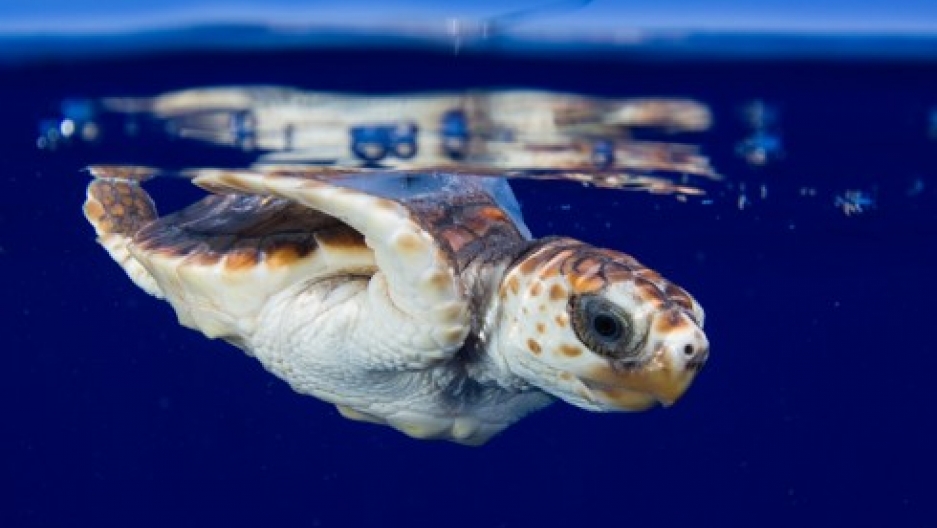 A satellite-tagged loggerhead turtle is released in the Gulf stream off of Florida's southeast coast in 2009.

Serendipity has always played a significant role in scientific progress. Some researchers estimate that 33-50 percent of scientific discoveries are due to luck and happenstance. But as Louis Pasteur once said, “Chance favors only the prepared mind.”

For conservationists, studying sea turtles has long presented a challenge. Newly-hatched sea turtles disappear almost immediately into the deep waters of the ocean, becoming almost impossible to track and not reappearing for years. Once the turtles finally reappear in the coastal waters of the United States and South America, conservationists must protect them for several decades before the turtles reach maturity and can contribute to the growth of the population.

After numerous failed attempts to develop a system for tracking the newborn turtles in the open ocean, Mansfield and Wyneken made what they call the “Keratin Connection,” with the help of an unexpected expert — Marisol Marrero, a manicurist and nail salon technician at Not Just Nails.

As it happens, a turtle’s shell and human finger and toe nails are all made from keratin. Marrero recommended that the researchers try an acrylic nail filler and hair extension glue as a way of affixing a solar-powered tracking device to the turtles before they disappear into the waves.

Sure enough, it worked. Mansfield and her team were able to track the turtles for two to three months, much longer than with any other device they had tried.

Following the turtles for this long led to a couple of significant discoveries. The turtles were previously thought to be drawn along within the currents of the North Atlantic subtropical gyre — a system of rotating ocean currents — giving them a long, developmental migration. Instead, about half of the turtles made their way to the Sargasso Sea, an area of the Atlantic Ocean enclosed within the gyre.

“It was fairly exciting,” says Dr. Mansfield, “because these data are the first for any in-water behavior, any information on how the turtles interact with their environments and where they may be going on a broad scale.”

In addition, Dr. Mansfield explains, they were able to determine that the turtles spent much of their time on the surface of the water. She theorizes that the turtles are receiving some sort of “thermal benefit” from the sun and the Sargassum seaweed that gives the Sargasso Sea its name.

“This makes sense, Mansfield says, “because the turtles are cold blooded animals. By remaining at the sea surface, and by associating with Sargassum habitat, turtles gain a thermal refuge of sorts that may help enhance growth and feeding rates, among other physiological benefits.”

Beyond helping to shed light on the mystery of the turtles’ “lost years” at sea, the researchers hope this new information may help them provide better management and protection for these threatened and endangered animals over the long term.