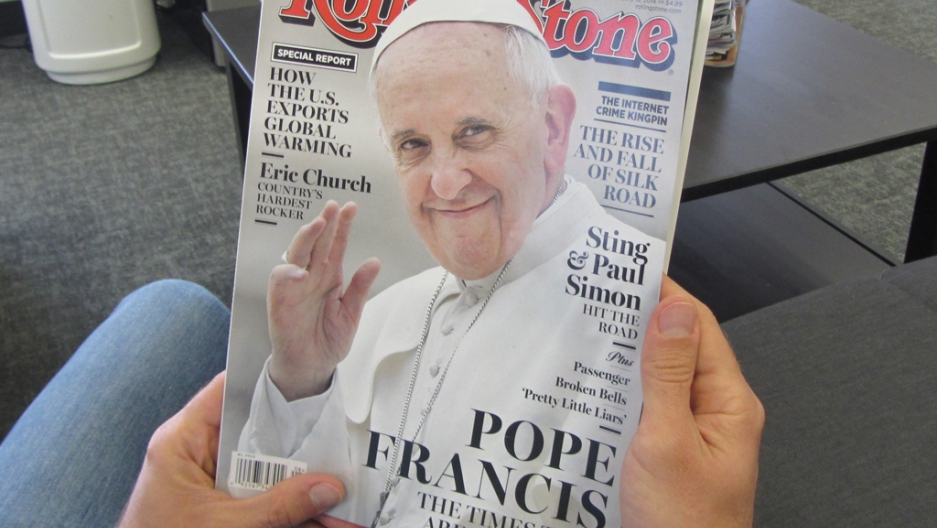 Rounding off a remarkable first year this month atop the Catholic Church, the man once called Cardinal Jorge Mario Bergoglio has gone from a relatively obscure Argentine cleric to one of the most recognizable brands on the planet.

In addition to taking his place in Rolling Stone magazine’s pantheon of pop-culture icons, he was named Time’s Person of the Year and now features prominently in Rome’s graffiti as Super Pope, the White-Caped Crusader.

“He brings a spirit of hope,” says Sister Simone Campbell, head of Network, a US Catholic social justice lobbying group. “Hope and change.”

Now wait just a minute. Wasn’t that someone else’s slogan?

“It is like with Obama,” Sister Simone says. “People were so hungry for a leader with a sense of people.”

Many Catholics, it seems, are also hungry for change in the Church. A new survey by the Pew Research Center finds that in the United States more than two-thirds of Catholics, and half of non-Catholics, think Francis represents major changes for the better.

Not unlike with the 44th president of the United States, the almost impossible expectations vested in the 266th pontiff might prove to be too much of a burden.

Since being elected by the College of Cardinals in a secret and byzantine process March 13, 2013, and taking office office a week later, Francis has sought to revolutionize the way many people see the Catholic Church.

His predecessor, Pope Benedict XVI, the former Archbishop Joseph Ratzinger of Munich, was a dour conservative dubbed “the German Shepherd” by some American priests.

Benedict seemed to revel in the trappings of his office, from his lavish robes to his handcrafted ruby-red papal loafers.

Francis, on the other hand, wears his own clunky black shoes, lives in a two-room apartment and drives around the Vatican in a 1984 Renault.

With his outreach to a global congregation, his embrace of the afflicted and his defense of the poor, he’s clearly trying to get his Church back to a more people-oriented mission, as he made clear in his apostolic exhortation issued in November.

But that may not be enough to calm the critics.

A recent report by the United Nations Committee on the Rights of the Child took the Vatican to task for its slow and flawed response to the Church’s sex-abuse scandal. Priests have molested thousands of children over decades, their actions covered up by the clergy hierarchy.

“The committee is gravely concerned that the Holy See has not acknowledged the extent of the crimes committed, has not taken the necessary measures to address cases of child sexual abuse and to protect children, and has adopted policies and practices which have led to the continuation of the abuse by and the impunity of the perpetrators,” reads the report.

In other words, the UN sees little change from the early days of the sex abuse scandal, which was exposed by The Boston Globe in 2002.

As the Globe put it: “For decades church leaders kept horrific tales of abuse out of the public eye through an elaborate culture of secrecy, deception, and intimidation. Victims who came forward with abuse claims were ignored or paid off, while accused priests were quietly transferred from parish to parish or sent for brief periods of psychological counseling.”

Despite Francis’ more open attitudes, very little progress has been made in the area of predatory priests, insists Barbara Blaine, president of the Survivors’ Network for those Abused by Priests (SNAP).

“The Church only ever did the right thing when it was forced to by external circumstances,” she said in a phone interview. “They cared much more for the reputation of predators than for the welfare of children.”

The UN also criticizes the Vatican for its attitudes on homosexuality, contraception and abortion. On the latter, the report cites the case of a 9-year-old girl in Brazil who was given an emergency abortion after she was raped by her stepfather.

The procedure was necessary to save the life of the mother, but the doctor who performed the abortion, as well as the girl’s mother, were sanctioned by the Roman Catholic Church’s Congregation of Bishops.

This is not an isolated case. In 2010, a Catholic hospital in Phoenix, Ariz., was stripped of its Catholic affiliation after it performed an abortion on a 27-year-old woman suffering from hypertension who was likely to die without the operation.

The nun who allowed the procedure, Sister Margaret McBride, was excommunicated.

Excommunication is the Church’s highest form of punishment. According to the Catholic Encyclopedia, it is “a medicinal, spiritual penalty that deprives the guilty Christian of all participation in the common blessings of ecclesiastical society.”

This extreme measure is reserved for especially grievous offenses such as “attempts to confer sacred ordination on a woman,” which means trying to make a woman a priest.

Pope Francis has reaffirmed that the issue of women priests is off the table.

Sexual offenses against children don’t come close to women’s ordination on the sin scale. In extreme circumstances, an offending priest might lose his job.

Sex abuse of a minor belongs to “grave delicts against morals,” according to the Substantive Norms adopted by the Vatican in 2010, and a cleric who commits such a sin “is to be punished according to the gravity of his crime, not excluding dismissal or deposition.”

The UN report strongly recommends that the Church “immediately remove all known and suspected child sexual abusers from assignment and refer the matter to the relevant law enforcement authorities for investigation and prosecution purposes.”

But rather than back down, the Vatican gave a blistering response to the international body.

“The committee’s comments in several directions seem to go beyond its powers and to interfere in the very moral and doctrinal positions of the Catholic Church,” Vatican spokesman Father Federico Lombardi said in a statement released shortly after the report became public.

The Church has been embroiled lately in several confrontations with secular powers. In a case that’s gone all the way to the US Supreme Court, a group of nuns called the Little Sisters of the Poor are protesting against an “Obamacare” requirement that employees be given access to contraception.

Opposition to birth control is apparently one of those “doctrinal positions” that brook no interference.

Another recent case pits a Catholic girls’ school in Boston against Massachusetts’s anti-discrimination laws, due to the administration’s refusal to hire a gay married man for its food service.

Pope Francis has signaled a new attitude toward homosexuality, ever since his now famous “Who am I to judge?” response in July to a journalist who asked him about gay priests.

He has also said the Church should not be “obsessed” with abortion, gay marriage and contraception, remarks that have given liberal Catholics hope that the Church’s standing on these issues is softening.

But they may be waiting a long while for any real shift.

“I don’t think that much has really changed yet,” Sister Simone says.

“Pope Francis speaks lofty words,” she concedes. “But he should be judged by his actions.”

So far, there’s little to suggest a departure from traditional positions.

The media campaign surrounding the new pope has helped distract attention from problems that continue to plague the Church, such as declining attendance, continued revelations of sex abuse of children, and the multiple financial, sexual and political dirty dealings revealed by the massive document release known as “Vatileaks.”

A recently aired PBS Frontline documentary speculated that the scandal led to Benedict’s decision to step down — the first papal resignation since 1415.

Ratzinger first had cited his age and weakening body as reasons for quitting. He later reportedly said God told him to do it.

Ever since Francis ascended to the papal throne last year, the press has been full of enthusiasm for the new pontiff — the first pope from Latin America — and has shown a quick readiness to accept him as a reformer. Rolling Stone hailed his “gentle revolution.”

Many point to a savvy PR mind behind the overwhelmingly positive press. The chief media guru is Greg Burke, a former Fox News reporter who was hired by the Vatican as media consultant in 2012. A staunch Catholic and a member of the controversial Opus Dei movement, Burke has been credited with Francis’ enormous success.

The pontiff unquestionably has a large team of handlers around him. They tweet in eight languages including Latin. His Twitter handles include the English-language @Pontifex, with more than 3.75 million followers, and the Spanish @Pontifex_es, with more than 5 million — quite a feat for a man who, according to the Rolling Stone article, has “never owned a mobile phone or a computer.”

Real change, if it comes, will take time.

It was not until 1992, after all, that the Vatican formally backed down from insisting that the Earth was the center of the universe.

“What can you expect?” Sister Simone says laughing. “It took us 350 years to admit that Galileo was right.”

More from GlobalPost: A Global Church, a special report