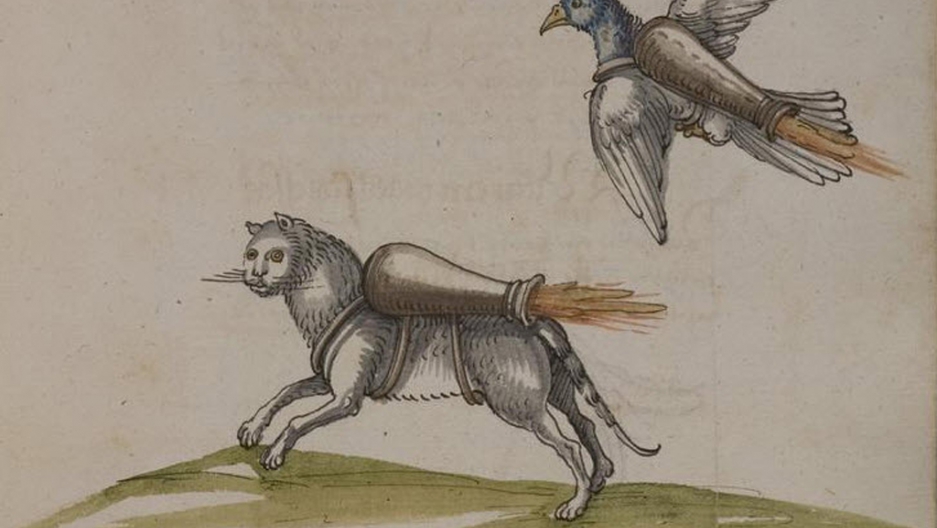 They're no Thunder Cats, or even Laser Cats a la "Saturday Night Live."

But these tough kitties (and doves) with rockets strapped to their backs from 16th century Germany are pretty freaking cool.

The fanciful illustrations are featured in a manual on artillery and siege warfare circa the mid-1500s, with the text helpfully suggesting military commanders use them to "set fire to a castle or city which you can't get at otherwise."

The University of Pennsylvania has digitized the manuscript, entitled "Feuer Beuch."

And researcher Mitch Fraas is trying to unravel its mystery.

Roughly translated from Old German to English by Fraas, the idea goes something like this:

"Create a small sack like a fire-arrow … bind the sack to the back of the cat, ignite it…and thereafter let the cat go, so it runs to the nearest castle or town, and out of fear it thinks to hide itself where it ends up in barn hay or straw it will be ignited."

2) Attach explosive to its back

3) Point it toward nearest castle to be razed

4) Hope and pray it starts a raging fire

Sounds brilliant to us.

But Fraas isn't so sure.

"Sort of a harebrained scheme," he told the AP. "It seems like a really terrible idea, and very unlikely the animals would run back to where they came from. More likely they'd set your own camp on fire."

But still! Rocket cats?!? From the 16th century?! Amazing.