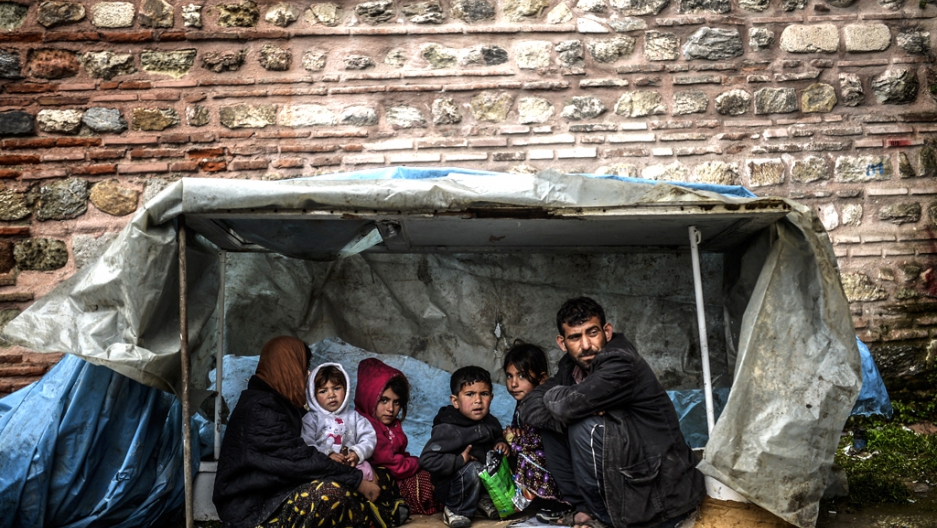 A Syrian refugee family from Aleppo stay under a shelter during a rainy day on March 8, 2014, in the Uskudar district of Istanbul.
Credit: BULENT KILIC
Share

Two reports released by non-governmental organizations on Monday highlighted how Syria's civil war has inflicted not just conventional violence and suffering on its civilian population.

Amnesty International accused Syrian governmental forces of using starvation as a "weapon of war" against the Yarmouk Palestinian refugee camp near Damascus.

The report, called "Squeezing the life out of Yarmouk: War crimes against besieged civilians," attributed at least 128 deaths out of a reported 200 during an army siege to starvation.

"Hundreds of civilian residents of Yarmouk have been killed, wounded or have perished as a result of deliberate starvation and destruction of their means of support, direct attacks on civilians and indiscriminate attacks," the report said.

"Life in Yarmouk has grown increasingly unbearable for desperate civilians who find themselves starving and trapped in a downward cycle of suffering with no means of escape," Amnesty's Philip Luther said in a statement.

First, when there was no more flour to make bread, families baked substitutes using lentils and then crushed bulgur wheat. Then, these supplies too were exhausted or became too expensive — by late 2013, a kilogram of rice cost between 10,000 and 15,000 Syrian pounds (US$70 to $100).

The report concluded, "The Syrian government has committed numerous war crimes as part of the siege of Yarmouk."

Save the Children's report, also published on Monday, looked at Syria's collapsing healthcare infrastructure with around 60 percent of Syria's hospitals damaged or destroyed.

"Syria's health system is now in such disarray that we have heard reports of doctors using old clothes for bandages and patients opting to be knocked unconscious with metal bars, because there are no anesthetics," the report said.

"The lack of clean water means sterilization for bandages is nearly impossible, causing the threat of infection and possible death."

A crumbling healthcare system has also meant amputations of children's limbs, as there was no equipment to treat their wounds, and newborns dying in incubators due to electricity cuts.

Diseases like measles and meningitis have spread, without proper vaccination programs. Up to 80,000 children may be infected with polio, which was pretty much eradicated in Syria in 1995.

According to World Health Organization estimates, nearly half of Syria's doctors have left the country.

Ths Syrian American Medical Society estimates that 200,000 Syrians have died as a result of treatable chronic illnesses since the beginning of the conflict. That's nearly double the number estimated killed by violence.

One doctor who remained and treats patients in a basement told Save the Children:

"Every day we have injured children suffering from critical burns and fractures – they need to have complicated operations but in this small hospital we don’t have the capacity. In some cases we have to cut their limbs off to try to save their lives – because if we don’t they will bleed to death."