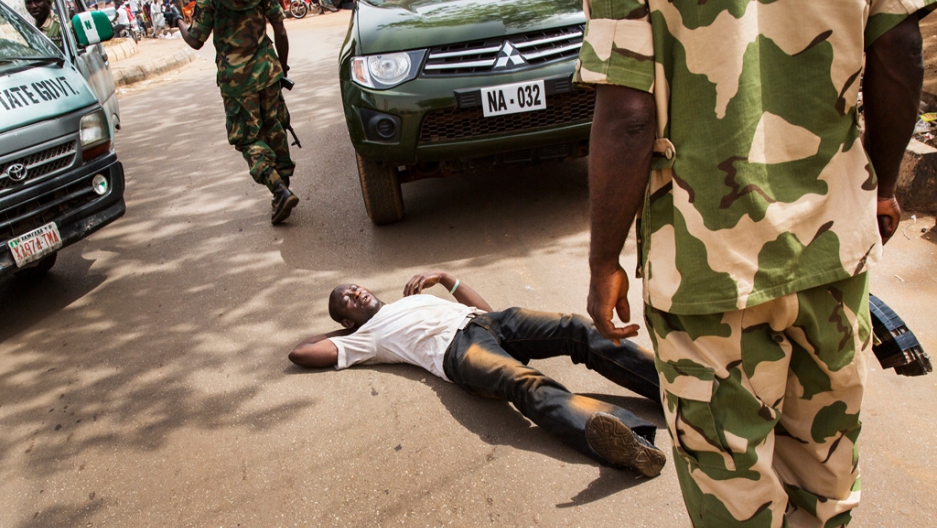 Nigerian Army forces man a checkpoint to protect Sunday Christian prayer services in Sokoto, Nigeria on April 14, 2013, where less than 5 percent of the population is Christian.
Credit: Ed Kashi/VII
Share

It made practical administrative sense to have one coherent British colony rather than two. It also made sense to merge a revenue-challenged colonial territory with a prosperous colonial neighbor, so the latter can subsidize the former.

The amalgamation made little sense otherwise and has often been invoked by Nigerians as the foundation of the rancorous relationship between the two regions of Nigeria. Northern Nigeria, now broken into several states and three geopolitical blocs, is largely Muslim. It was the center of a precolonial Islamic empire called the Sokoto Caliphate, and its Muslim populations, especially those whose ancestors had been part of the caliphate, generally look to the Middle East and the wider Muslim world for solidarity and sociopolitical example. The South, an ethnically diverse region containing many states and three geopolitical units, is largely Christian. The major sociopolitical influences there are Western and traditional African.

These differences have been a source of political disagreements and suspicions between the two regions since colonial times.

To add to this cauldron, each of the two regions contains ethnic and religious minorities who harbor grievances against ethnic and religious majorities they see as hegemonic oppressors. These grievances are sometimes expressed through bitter political complaints, through sectarian crises stoked by political elites and incendiary media rhetoric, and through violent insurgencies.

Between 1947 and 1959 Nigerian nationalist leaders from different regional, ethnic, and religious communities came together in a series of conferences and parliaments to negotiate the transition to self-rule and to map out a common future. During these interactions and in the first few years after independence in 1960, the jarring effects of arbitrary colonial unification manifested as seemingly irreconcilable differences of aspirations, priorities, and visions. So deep were these religious and ethnic antagonisms that one Northern Nigerian Muslim nationalist leader declared Nigeria “the mistake of 1914” while a prominent Southern Nigerian Christian nationalist figure called Nigeria “a mere geographic expression.”

In Nigeria’s national politics, Christian anxieties about Muslim domination of the national political space and the accompanying fear that politically dominant Muslims would use their privileged perch to Islamize national institutions and impose Islamic Sharia law on non-Muslims date back to colonial times. Muslims, especially those from Northern Nigeria, for their part, have sought to fend off what they regard as unbridled Westernization and have sporadically sought refuge in parochial religious reforms.

Mismanagement of national resources and misrule by multi-ethnic and multi-religious coalitions of successive rulers since independence have impoverished and denied opportunities to the majority of Nigerians. As a result, religious rhetoric blaming members of other religious communities and proposals for religious reform as a solution to society’s ills have found purchase among the masses. This genuine, if misplaced, quest for a religious utopia has given some opportunistic political gladiators an excuse to curry legitimacy through politicized appeals to piety and religious fervor.

The desperate advancement of religious solutions to socioeconomic and political problems has deepened social fissures and spawned extremist and violent insurgencies such as the ongoing Boko Haram Islamist terrorist campaign, which has killed and maimed Christians and Muslims alike.

The adoption of the Sharia criminal legal system by a slew of Northern Nigerian Muslim-majority states between 2000 and 2002 was the highpoint of this new politicization of religion. Once Sharia was introduced, it only added to the fear of Christians that they would be persecuted and their freedoms, guaranteed in the Nigerian constitution, curtailed. Christian communities in the affected states protested, their protests stoked by the rhetoric of Christian politicians and leaders. Clashes between Christian and Muslim communities with a history of peaceful cohabitation followed, in which thousands of people were killed, property destroyed, and hundreds of thousands displaced.

Sharia had been a sticking point in Nigerian politics for decades. In 1978 when many Northern Nigerian Muslim delegates to a constitutional conference sought to extend Sharia beyond the realm of family law, Christian delegates protested, and the Sharia debate almost tore the conference apart. A compromise allowed states with majority or significant Muslim populations to set up Islamic courts but Sharia’s application was restricted to inheritance and family law.

Subsequently, religion became a major topic of national political debates, with each religious community pushing increasingly adversarial agendas. In Northern Nigeria, clashes between Muslim groups—mainly ethnic Hausa and Fulani—and Christian and traditionalist communities have become a monthly affair, with devastating consequences. In this charged environment where religion functions as the primary idiom of political identity, conflicts over resources, cattle, land, and political offices have often taken on a religious coloration, with Muslims pitted against Christians.

Colonialism did not cause the primordial conditions and identities that have generated tensions and conflicts between Christians and Muslims, but it made them worse. The British colonial policy of Indirect Rule, a divide-and-rule system that required sharp ethno-religious differentiation among Nigerians, made religion and ethnicity the preeminent markers of identity and pushed exclusionary identity politics into the political arena. As a result, in Northern Nigeria, minority ethnic groups, mostly Christians, defined and still define themselves against the Muslim Hausa-Fulani majority, under the political rubric of Middle Belt, which is usually a stand-in for “non-Muslim.”

Since colonization established the basis for using identity politics as a means of accessing political and economic resources, religious differences have exacerbated political crises and have been implicated in major national conflicts such as the Nigerian civil war (1967-70), in which the Biafran separatist movement initiated by the predominantly Christian Igbo people was crushed by a Federal Nigeria which used pogroms, blockades, and starvation to exact victory. Religious animosities only grew from that tragic episode of Nigerian history.

Since independence, religious and ethnic rhetoric has leveraged claims to political representation and opportunities. This is bad enough and often degenerates into fierce zero-sum conflicts. Corruption and incompetent leadership have added another wrinkle, preventing the equitable distribution of resources and opportunities and making the politics of religious and ethnic exclusivity more appealing.

Official graft needs to be tackled headlong. A new constitution that defines rights and privileges of citizenship in terms of residency rather than nativism, ancestry, and religion needs to be crafted. This new constitution needs to devolve power over resource distribution and development from an all-powerful central government to local constituencies.

This will ensure economic justice and equity. It will make central political power less attractive and less corrupt and contests over national political offices less contentious. The use of religious and ethnic appeals as tools of political mobilization will become less attractive and find a diminished reception in a climate of justice, equitable resource distribution, and equal opportunities for all.

Dr. Ochonu is Professor of African History at Vanderbilt University and is the author of "Colonialism By Proxy: Hausa Imperial Agents and Middle Belt Consciousness in Nigeria" (2014).