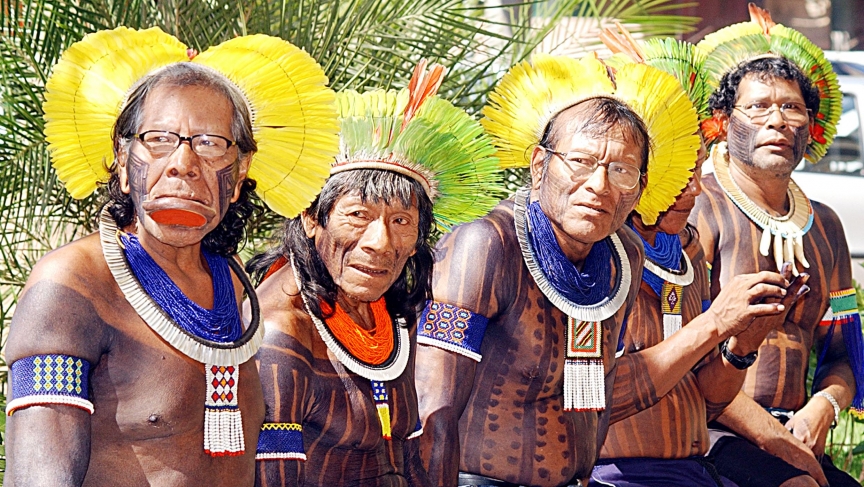 Brazilian indian chiefs, from the indigenous group of the Kayapos tribe, sit during a collective interview. They are, from left, Raony (state of Mato Grosso), Kaye, Kadjor and Panara (Pará).

Deforestation rates in the Brazilian Amazon have been falling for the past decade. But a recent spike has conservationists concerned.

Most experts agree that when it comes to protecting the rainforest, no one does it better than the indigenous people who have lived there for centuries. Megaron Ti, a chief of the Kayapo tribe in Brazil, recently travelled to North America — in time to see the snow and ice of New York and Toronto — to seek support for his people.

“I’ve come to explain to the public about how we live,” Megaron says. “About the land — the forest that the Brazilian government has demarcated for us and our struggle to preserve this forest.”

The Kayapo and other indigenous people of South America have battled the forces of progress and modernization for decades. In the early part of the 20th century, the Kayapo faced the onslaught of miners, loggers, rubber tappers, ranchers and missionaries. Today, the threats to the forest and the old traditions are different, but no less dire.

“I’m very worried,” Megaron says. “I am worried about the deforestation and dam construction that could destroy our way of life. I’m also very concerned that politicians in Brazil are saying that they want to reduce already demarcated indigenous lands.”

In the past, the Kayapo successfully used the tools of modern culture to resist governmental invasions. In 1989, they organized a five-day media conference, known as the Altamira Gathering, to rally world opposition to the Kararaô Dam project on the Xingu River, which would have flooded parts of their land. They enlisted the help of international conservation organizations and celebrities such as the rock star Sting.

But after years of court battles, the Kararaô Dam project — now known as the Belo Monte hydroelectric complex — is under construction. It's not the only dam in the works; there are several others being proposed.

Beyond the acute environmental threats facing the tribes of the Amazon, other forces imperil the indigenous cultures.

Kayapo youth are now on the Internet. They use cell phones; they use Facebook. Megaron’s own children have gone to school, some of them to college. Megaron says they’ve returned to the village to help their people, but he remains concerned.

“I know my children and grandchildren can learn bad things from the white people’s world. My hope is that they’ll be able to learn white people’s things, but also maintain their culture, their traditions, their language, and their customs,” he says.

For now, they maintain what may be most crucial: their land. For Megaron Ti, the fight will continue.

“The Kayapo people have always lived in the forest without destroying it. We’ve always preserved the forest and we plan to continue preserving it into the future."

This story is based on an interview by our partner Living on Earth, where you can find more coverage of environmental issues.