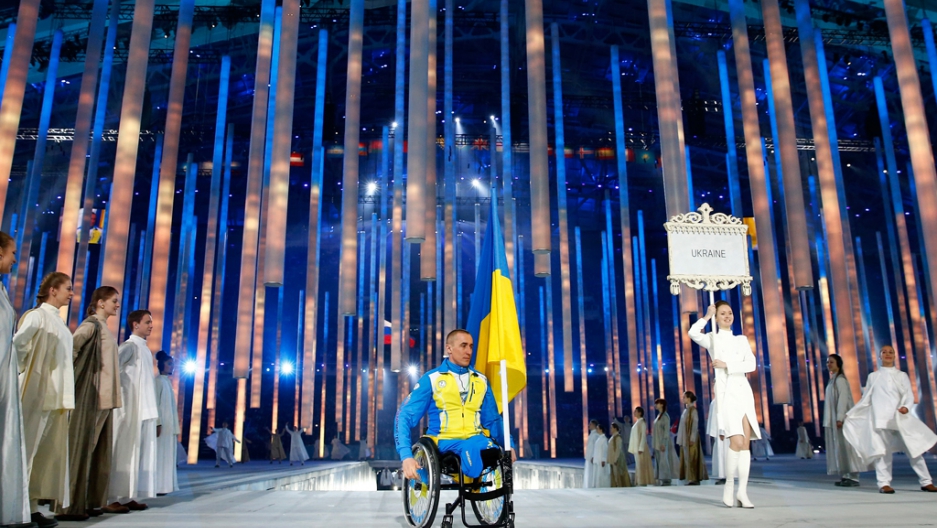 Cross-country skier and biathlete Mykhaylo Tkachenko of Ukraine bears the flag as he enters the stadium during the Opening Ceremony of the Sochi 2014 Paralympic Winter Games at Fisht Olympic Stadium on March 7, 2014 in Sochi, Russia.
Credit: Tom Pennington
Share

Ukraine isn’t boycotting the 2014 Paralympic Winter Games in Russia, but its athletes opted for a symbolic protest during the opening ceremony on Friday nonetheless.

Ukraine sent a small team of 23 athletes to Sochi, including cross-country skier and biathlete Mykhaylo Tkachenko, who carried the flag during the opening ceremony.

With their nations embroiled in a political-military conflict in the Crimean Peninsula, Tkachenko was the only one to enter the Olympic stadium during the athletes march.

The rest of the Ukrainian Paralympic team stood in the entry tunnel in protest, according to CBC.

While most athletes are attending the Paralympics, their governments are not.

Great Britain and the United States, most notably, withdrew their official delegations earlier this week in protest of Russia's involvement in Crimea.

“In addition to other measures we are taking in response to the situation in Ukraine, the United States will no longer send a presidential delegation to the upcoming Winter Paralympic Games in Sochi,” said National Security Council spokeswoman Caitlin Hayden.