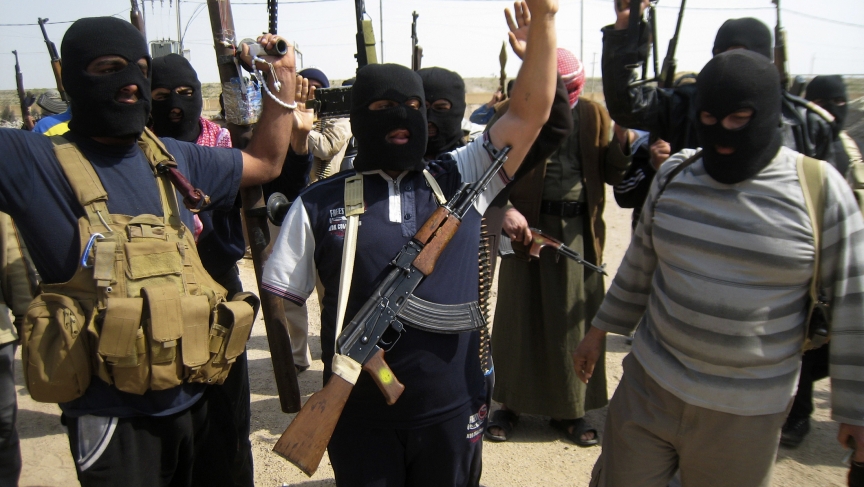 Masked Sunni Muslim gunmen pose for a photo during their patrol in the city of Falluja, February 26, 2014. Government forces are fighting rebellious Sunni tribes and an al-Qaeda splinter group, the Islamic State of Iraq and the Levant in western Anbar province.

Those were the names given to the US military campaigns in the Iraqi city of Fallujah almost 10 years ago. More than 100 American troops died, and nearly 600 were wounded, in an effort to purge the city of insurgents linked to al-Qaeda.

Insurgents returned this winter to seize the city once again.

"We sort of took our eyes off the ball," said Baghdad-based reporter Jane Arraf. "In the meantime, all of those fighters who US troops were fighting as well as a whole range of other influences, particularly the Syrian conflict next door, have gathered and now there is a war in Fallujah."

Violence in Anbar province erupted last year when local Sunni tribes revolted, aroused by a government raid where Sunni politicians and protesters were arrested. Al-Qaeda-linked fighters took over Fallujah and parts of Ramadi in December, taking the lead in the uprising against the Shiite-led government.

"I think we remember those terrible images — those American contractors hung from the iron bridge," said Arraf. "In a city that was essentially levelled, with the worst losses to US forces in Anbar Province in the entire war, now a lot of that kind of fighting, the ferocity of the fighting, is happening again. And it’s really going on outside the public eye."

Iraqi prime minister Nuri al-Maliki has been reaching out to local tribes to help him expel militants from the area, while simultaneously appealing for the international community to support the country with arms to fight al-Qaeda.

"The Iraqi army has surrounded Fallujah," Arraf said. "Nobody is getting in and out. It’s very hard for aid to get in. And the enemy that they say they are fighting, and they have been hammering on about this, they see this as a fight to the [for] death al-Qaeda."

The lengthy stand-off has forced more than 140,000 people to flee their homes, and has resulted in hundreds of deaths — including civilians.