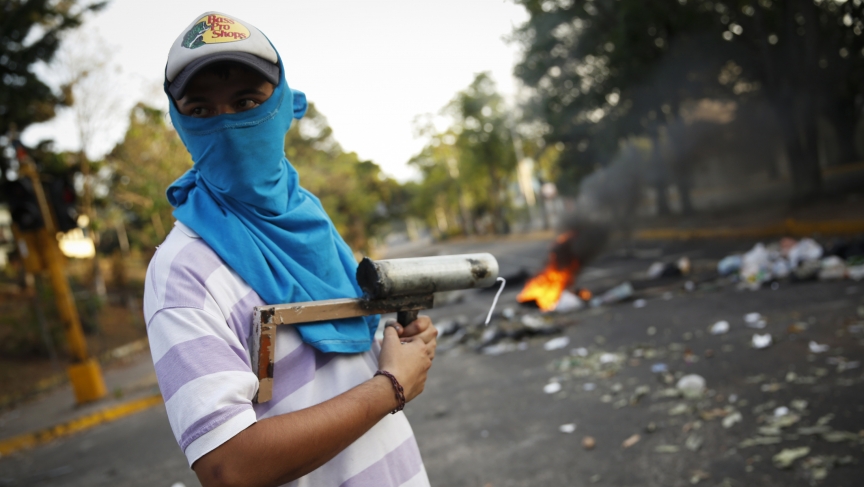 A demonstrator stands guard with a rudimentary mortar in front of a burning barricade during protests against Nicolás Maduro's government in San Cristóbal, Venezuela.

In Venezuela, one of the more popular downloads right now is Zello, a walkie-talkie smartphone app created in Austin, Texas.

It lets users create public or, password-protected, private groups and talk without revealing their location or identity — an important feature for anti-government protesters. The app’s popularity shot up in Turkey, Egypt and, most recently, Ukraine, during the unrest there.

Now, Zello is reporting hundreds of thousands of downloads in Venezuela as tensions rise and people, particularly protesters, try to stay better connected. Also increasingly popular in Venezuela: WhatsApp, the instant messaging service recently purchased by Facebook, along with the software needed to create virtual private networks, or VPNs, which give users more private and secure access to the Internet.

The clashes pit the Nicolás Maduro administration against protesters, who say the government must do more to combat food shortages, rising inflation and crime. In response, the government has dispatched the national guard. Violent, government-backed militia groups, or colectivos, are reportedly patrolling the streets.

So far, the unrest has left 13 dead and many more injured.

But as Venezuelans, particularly those opposing the government, seek under-the-wire ways to communicate, apps like Zello are hitting obstacles.

We have confirmed Zello is blocked by CANTV in Venezuela again. The new block is more sophisticated and we researching it now.

Last week, there were unexplained and prolonged Internet shutdowns in parts of Venezuela, especially in the state of Táchira, where the protests began.

The state-owned Internet provider has also tried to block Zello, though the app's developers have since created a workaround. Other outlets, including Twitter, have also reported that users in Venezuela have been unable to access parts of their services.

President Nicolás Maduro (who is also Tweeting during this crisis) says he’s not behind any of this. But he does say that it’s the government’s job to protect Venezuelans from “war propaganda” “coup mongers” and people provoking “public anxiety.” A new law makes it easier to jail people for crossing these blurry lines.

"I will be at work all day in Miraflores, the House of People's Power Governing and protecting the Peace from the attacks of Fascism"

But it’s not just people in Venezuela turning to these newer — and perhaps safer — lines of communication. Venezuelans abroad are doing that too.

Sandra Jaimes lives in San Jose, Calif., but is from the city of San Cristóbal, the capital city of Táchira.

“I’m the only member of my family here in the United States,” says Jaimes. “Everybody else is in Venezuela.” She says she can't get a clear idea of what is really happening back home, and can’t rely on the state-controlled media. The opposition is spreading plenty of false information too.

She’s now in a closed WhatsApp group with 50 relatives. She says her family is sending her pictures of the unrest they see in San Cristóbal and asking her to publish them to Facebook. “Sometimes they don’t do it because they’re afraid,” she says.

She also sees how the app is making daily life there a little easier. “Right now, it’s like a survival tool,” she says. “We know where everybody is, if everybody’s safe.”

At the more micro level, she says her family in Venezuela is using the app to communicate with local storekeepers, to check on the their supplies. Jaimes says, right now, her relatives and their neighbors are, “taking turns to watch the streets at night to inform when they see something coming, when they hear a noise.”

In Venezuela, there’s a collective of programmers determined to keep these mobile apps and networks thriving.

“I belong to the open-source movement and this is part of my culture — of having a free community, free culture and a free Internet,” one young hacker and activist says over Skype. “A typical day for me has been getting infrastructure ready for more people to use. Proxies, using network tools to check censorship.”

And he knows it’s a risky time to do this, and wants to remain anonymous. “I’m not at home. I’m staying at a friend’s house. I’m moving locations all the time,” he says, adding “I wonder why I’m doing this. But the thing is, I remind myself that I’m a Venezuelan citizen and I deserve to be treated like one.”

When asked what he thinks will happen in Venezuela, he says he’s not sure. But he says his role right now is to let people have the freedom to protest, debate and have a say in what comes next.