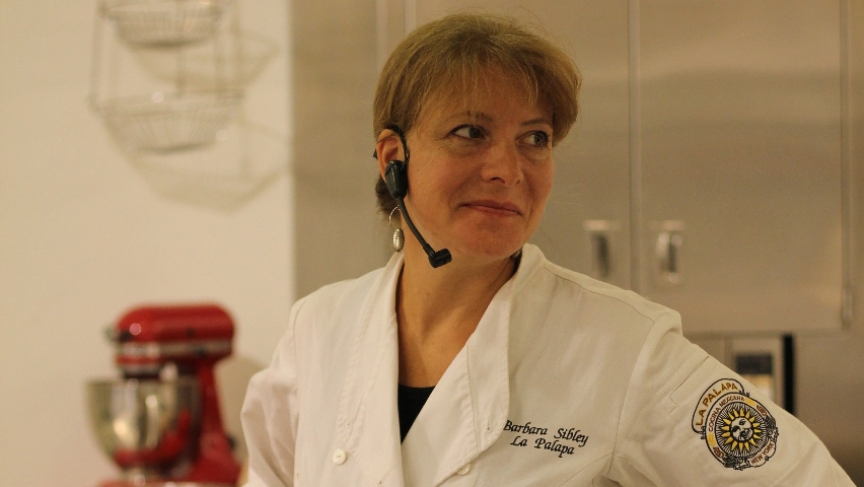 Barbara Sibley grew up in Mexico City, the child of expatriate Americans who fell in love with Mexico and decided to stay.

Sibley's home was in Mexico City's San Ángel neighborhood, in the southwest of the city.

One of the local landmarks was a convent.

As a child, Sibley would go to the door of the convent and buy small bags of leftover host, the doughy, sweet white wafers used in the Catholic communion rite. "They would make the host in large sheets, like the size of a letter, and they would punch out the circles. At the convent you could buy large bags of the leftover edges."

And it was a very mysterious exchange: "You'd walk to the door of the convent, a gate would open, and a hand would come out with a plastic bag full of these bits."

Barbara Sibley still travels to Mexico City regularly — she thinks of it as home — but these days she runs a restaurant in New York City: La Palapa Cocina Mexicana. She's also co-author of the book "Antojitos: Festive and Flavorful Mexican Appetizers."

And she's developed a deep understanding of the roots of Mexican cuisine, including American favorites such as enchiladas and mole poblano.

It turns out that the kitchens of Mexico's convents were central to the development of those dishes, and many more.

"You start with the pre-Columbians, before the Spaniards came," Sibley explains. "When they came and colonized Mexico they needed a place for women, and the convents and monasteries were often placed along the roads; they were safe havens, as well as places where they were evangelizing and teaching the native Mexicans about Catholicism."

The convents grew into schools and cultural centers, and the kitchens became "more and more elaborate," culminating at the end of the Viceregal period — the late 1820s — with a recipe for chiles en nogada, one of the most important dishes in Mexican culinary history.

That recipe, developed at a covent, features poblano chili peppers stuffed with pork, beef, and many sweets, both fruits and nuts. It's covered with a cheese and walnut cream (the nogada), and garnished with pomegranate seeds and fresh parsley.

Chiles en nogada was created at the beginning of Mexico's independence from Spain, and the dish proudly reflects the colors of the Mexican flag.

That kind of unification, in essence, represents the prime contribution of Mexico's convent kitchens, says Barbara Sibley. The kitchens were where the country's mestizaje or mixing, took place—ingredients and cultural traditions, both indigenous and imported, came together in the creation of extraordinary new flavors and dishes.

"The food that we think of as the food of Mexico," says Sibley, "really originated in the convents."

When buying fresh chiles, choose ones that have firm flesh and no breaks or wrinkles on the skin. Most chiles are harvested with the stems on and this keeps the chiles fresh longer. They should be rinsed before use or washed with a food safe soap as some chiles are processed with wax, similar to apples, to extend their shelf life. Raw chiles should be stored in the refrigerator in a loosely closed plastic bag. Raw chiles have a tough skin and often they are roasted to remove the skin before using them for rajas, chile strips, or for stuffing. This is can be done best with Jalapeños or Poblanos.

2 poblano chiles, deveined and chopped, about ½ a cup

To serve the chiles place them on a platter with a dollop of the nogada, a parsley sprig and a sprinkle of pomegranate seeds.