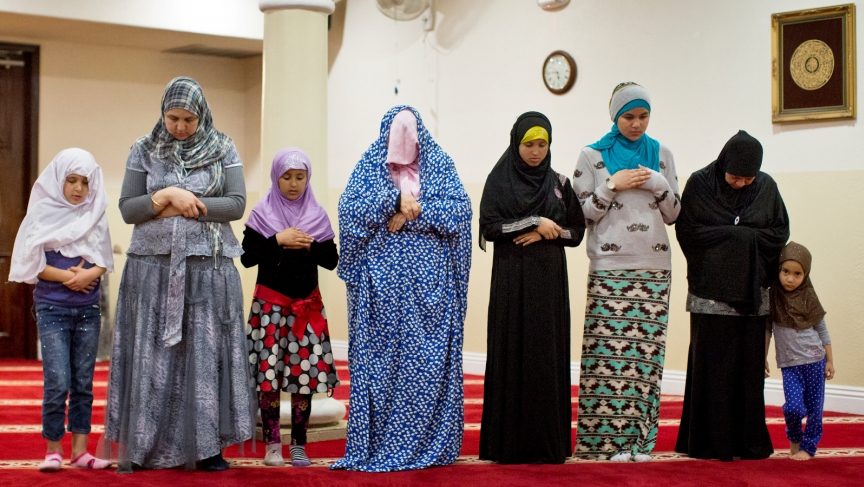 Women take part in the Maghrib prayer just after sunset at the West Coast Islamic Society in Anaheim on Feb. 12. The prayer is the fourth of five daily prayers.

About 16 million Mickey fans flock to Anaheim, California, every year to visit Disneyland. But a movement is growing in Anaheim to promote a lesser known destination: Little Arabia.

That's what some locals call one of the city's small neighborhoods. It's centered on a two-mile stretch of Brookhurst Street that features a mosque, hookah lounges and a variety of shops run by people from different parts of the Middle East.

Arab-owned businesses began to root themselves in this area in the 1980s. Today, customers have been known to travel hours for delicacies and wares they can’t find elsewhere in California, such as the nine varieties of kibbeh, a meat dish served at Aleppo's Kitchen restaurant.

Given the area’s growth and popularity, some community activists and business leaders are pushing to make the Little Arabia moniker official.

“We want to share our culture," says community activist Rida Hamida. "We want to celebrate our culture with everyone that lives here.” Hamida is part of a group advocating for an official designation. It's an idea that has been floated around in recent years, but failed to catch on after some long-time residents voiced their opposition.

But the idea of branding Little Arabia is gaining traction with city leaders who are eager to give visitors another taste of Anaheim, besides Disneyland.

In his state of the city address last month, Mayor Tom Tait called for an, “ambitious marketing plan” for Little Arabia, which he praised as “a cultural destination in our city.”

"Whether you are stopping by Olive Tree for delicious lamb or picking up some baklava at Papa Hassan's, Little Arabia gives visitors a different experience than a typical convention city," Tait said in his speech.

The Anaheim Orange County Visitor and Convention Bureau is moving in that direction by including Little Arabia, for the first time, in the newest visitor guides coming out in April, says spokeswoman Elaine Cali.

"Anaheim is what you think it is — Disney and all that — and it might be a lot of things that you don’t know that it is," Cali says.

Still, the idea of branding Little Arabia has created debate among some locals. Some residents of West Anaheim argue Little Arabia shouldn't receive an official designation.

Trucker Anthony Carmona says Brookhurst doesn’t have the critical mass of ethnic businesses seen in LA’s Koreatown or Orange County’s Little Saigon, which is so sprawling it spills into several cities.

“Those are very condensed areas and I just don’t think that much has changed here [in Anaheim] that it should be dubbed that,” Carmona says.

Leaders of the West Anaheim Neighborhood Development Council have also expressed reservations about such an official designation. They are particularly concerned about the hookah lounges that have sprouted up along Brookhurst, which they say are noisy and harmful to lung health.

Andre Beck, a retired engineer and member of the neighborhood council, asks why the city should promote a part of the town where he has never felt welcome himself?

“They have their own way of doing things,” says Beck, who has lived in West Anaheim for about 50 years. “If you go into there to shop, they just kind of ignore you. And that’s part of the problem we have. They just don’t want to meld in with the community.”

Beck added that he was a "little concerned and a little bit of afraid of what they might do if they get ahold of the community. And we don’t want that. We want the community to stay the same.”

Hamida says while it's possible some customers have had a bad shopping experience, all the businesses she knows welcome customers of all backgrounds and want to be part of the community.

"Hearing that is very painful because we don’t want anyone to be intimidated by us. We actually are afraid that people will be afraid of us," Hamida says. "We want everyone to feel like we value the American culture and we want everyone to see us as part of this fabric."

Fellow community activist Rashad Al-Dabbagh says the point of an official designation is not to create a "ghetto," but to promote businesses — Arab and non-Arab alike.

"When you’re driving on a freeway and you see a sign that that says Little Arabia, that attracts more people," Al-Dabbagh says.

To build ties between the Arab-American community and other residents, Al-Dabbagh and Hamida co-founded the Arab-American Civic Council last year. They hope to boost voter registration beyond the already 7,000 or so Arab Americans currently registered. Recently, they organized a lunch at a Lebanese restaurant for Arab-American business leaders, the mayor and neighborhood council members. They dubbed it the "Shawarma Summit."

Hamida called it a step toward building trust and friendship that she hopes will one day lead to an official Little Arabia that everyone can get behind. But how long that will take, neither Hamida nor Al-Dabbagh can say.