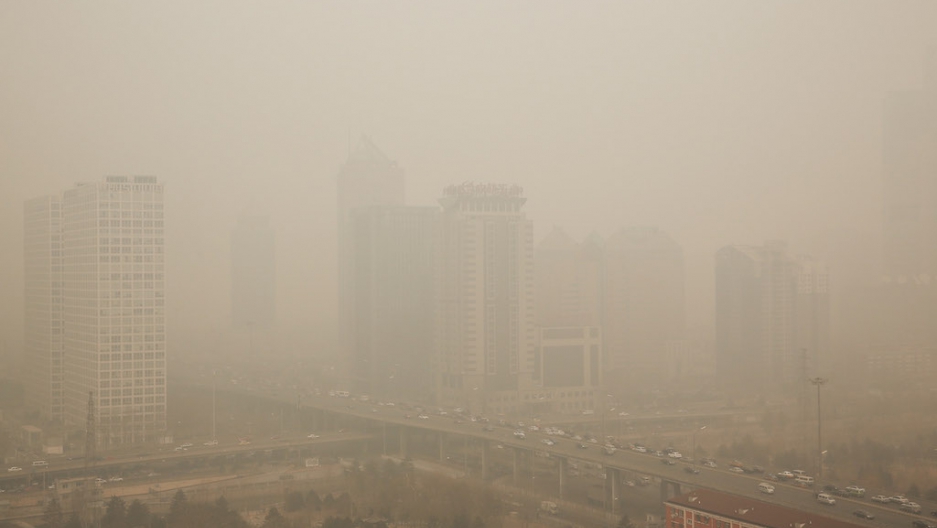 Residents in the Chinese capital of Beijing woke to another day of thick, choking smog on Feb. 25, 2014. The city has been under an "orange" smog alert since Monday, which is the second-highest warning level of a new system introduced last year.
Credit: Lintao Zhang
Share

Thick, toxic pollution has blanketed swathes of northern and eastern China for the past week, including the capital Beijing where authorities have advised schools to cancel outdoor activities and ordered dozens of factories to suspend production.

The choking smog in Beijing has been averaging more than 16 times the level the World Health Organization considers safe, prompting WHO's China representative to describe the pollution as a “crisis” and urge residents to stay home and “basically cope with it as much as possible.”

More from GlobalPost: Why China’s reputation as the clean energy king is overblown

The Beijing government placed the city under “orange” alert on Friday, the first time the second-highest warning level of a new smog alert system introduced last year had been issued. It reissued the alert on Monday as air quality deteriorated.

A “red” alert, the top warning level, requires half of the city’s cars to stay off the streets.

BBC correspondent Martin Patience compared the pollution shrouding the city to that of a smokers’ lounge at the airport.

“You can see it, you can smell it, you can taste it as well,” Patience said in a dispatch on Tuesday, the sixth straight day the metropolis has been cloaked in smog.

The pollution is so bad that even the government’s own climate change adviser has said it’s intolerable and the country needs to curb its excessive reliance on coal.

China, the worlds’ No. 1 carbon emitter, uses coal to produce about 65 percent of its energy.

“China’s pollution is at an unbearable stage,” Li Junfeng, director general of the National Center for Climate Change Strategy and International Cooperation, said at a conference in Beijing earlier this week.

“It’s like a smoker who needs to quit smoking at once otherwise he will risk getting lung cancer.”

The US Embassy’s air pollution index has shown the levels of PM2.5 — the tiny airborne particulates that can penetrate deep into the lungs and have been linked to hundreds of thousands of premature deaths — have regularly exceeded 400 micrograms per cubic meter in recent days.

WHO recommends 24-hour exposure of no more than 25 micrograms per cubic meter.

“In a situation when you have very bad air, as we have right now, the discussion must be primarily how we can protect the individual,” Dr. Bernhard Schwartländer, WHO’s representative in Beijing, told reporters Tuesday.

“Of course the longer term discussion on how we can reduce the levels of emissions is a very important one but right now we have a crisis that we have to deal with and hence the recommendation to stay inside.”