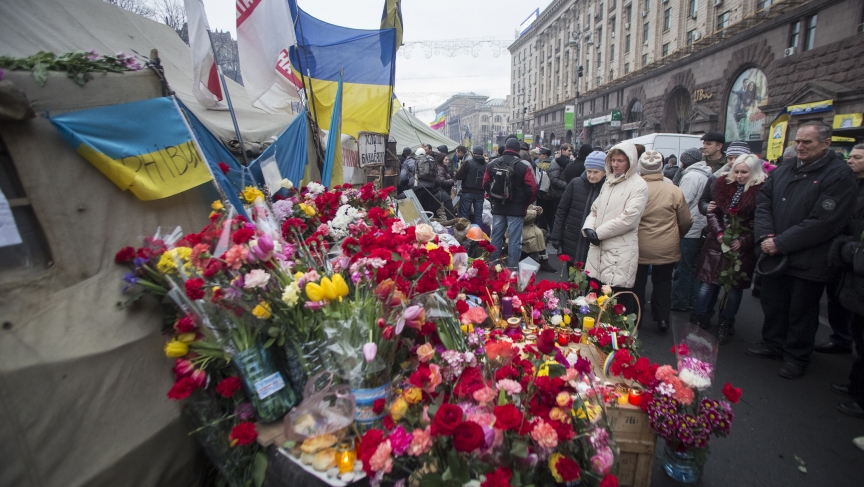 People place flowers at a makeshift memorial as they gather to commemorate the victims of the recent clashes in Kiev.

Russia is stepping up its rhetoric against Ukraine's new Western-leaning leadership as tensions rise over the ousting of President Viktor Yanukovych.

Ukraine's new interim interior minister, Oleksandr Turchynov, had earlier indicated that an arrest warrant had been issued for Yanukovych.

Russia, angered at the loss of its political ally, has recalled its ambassador for consultation.

Unrest in Ukraine began in late November when Yanukovych rejected a landmark association and trade deal with the European Union in favor of closer ties with Russia.

The situation came to a head last week when the Yanukovich government decided to end the protests on Independence Square by force culminating with the Ukrainian parliament voting to dismiss Yanukovych and appointing an interim president on Sunday.

The whereabouts of Yanukovych, who decried parliament's decision as a "coup," are still unclear at this point.

What seems clear, though, is that Yanukovych is no longer in charge of Ukraine.

That change came at enormous cost: more than 80 people (mostly protesters) died in the running battles with the security forces.

And it might not be quite over yet: After her release from jail, former Prime Minister Yulia Tymoshenko, urged the crowd on Independence Square to stay put and continue with the protest.

Interim President Turchynov, who is a close associate of Tymoshenko, called forming a unity government a "priority task."

"We don't have much time," one of the opposition leaders, former world champion boxer, Vitaly Klitschko, said as parliament began its debate.

The White House said the US was keen to see Ukraine build a new government and hold early elections, and it welcomed Tymoshenko's release.

But there’s wariness in western capitals and the mediation efforts are well under way: EU foreign affairs chief Catherine Ashton is in Kiev to discuss financial and political support for Ukraine's new leaders.

Tymoshenko already had a phone call with German chancellor Angela Merkel who reportedly admonished her to make serious efforts to include people in the eastern part of Ukraine, the pro-Russian power base of ousted President Yanukovych.

Much will depend on what the international sponsors of the political opponents in Ukraine will do now. Many observers see Ukraine as being caught in a kind of modern version of the "Great Game" in which Vladimir Putin wants to make Russia a global economic player, rivaling the US, China, and the European Union.

Not too long ago, it looked like Putin had stopped any eastern expansion of the EU into Ukraine for the time being by making Yanukovych renege on an association treaty with Brussels.

But that move triggered the mass protests that now seem to have caused the downfall of Putin’s ally.

Whether Ukraine can stabilize will become clearer after the next election which now could take place in May.

It’s all happened before: in 2004 Yanukovych was forced out by the Orange Revolution, only to return as prime minister in 2006 and to be elected president in 2010.