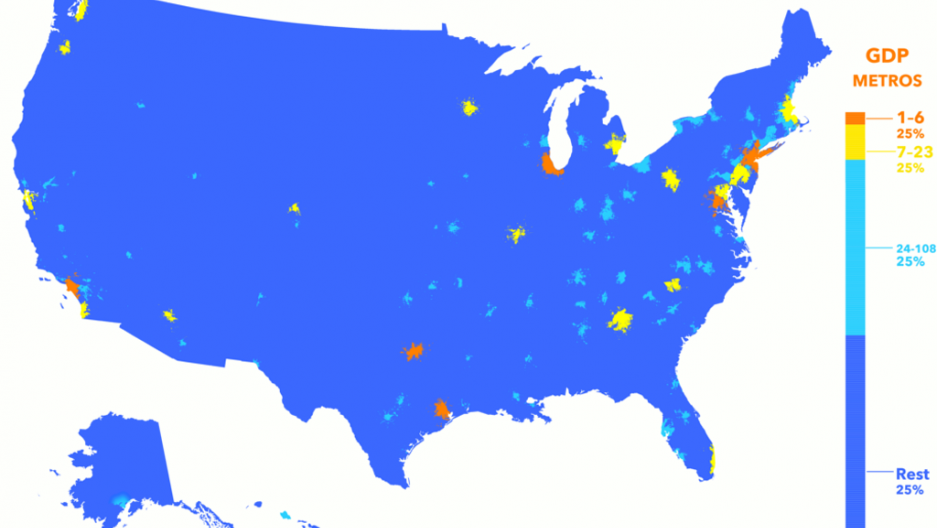 Six metro areas — New York, Los Angeles, Chicago, Washington D.C., Dallas and Houston — account for almost a quarter of the nation’s $16.8 trillion economy; add in the next 17 highest-ranked metros, and you account for about half of all economic activity.
Credit: Alexandr Trubetskoy
Share

It may be unsurprising to know that the location of greatest economic output is related to population density, but seeing the actual distrubution is striking: the top seven GDP producing cities —  New York, Los Angeles, Chicago, Washington DC, Dallas and Houston — account for nearly a quarter of the US economy. Further, America's top 23 metro areas make up nearly half of its GDP.

Alexandr Trubetskoy created the map using 2013 data from an IHS Global Insight report on US Metro economies. Each color on the map represents a quarter of America's roughly $16 trillion economy.

It was a revision of his original map below that was shared widely on social media. He said he changed it due to criticism against his original methodology. Other interesting facts from the report include:

– Out of the 100 largest economies in the world, 36 belong to US metro areas.

– New York City ranks as the 13th largest economy in the world, surpassing countries like Spain, Mexico and South Korea.