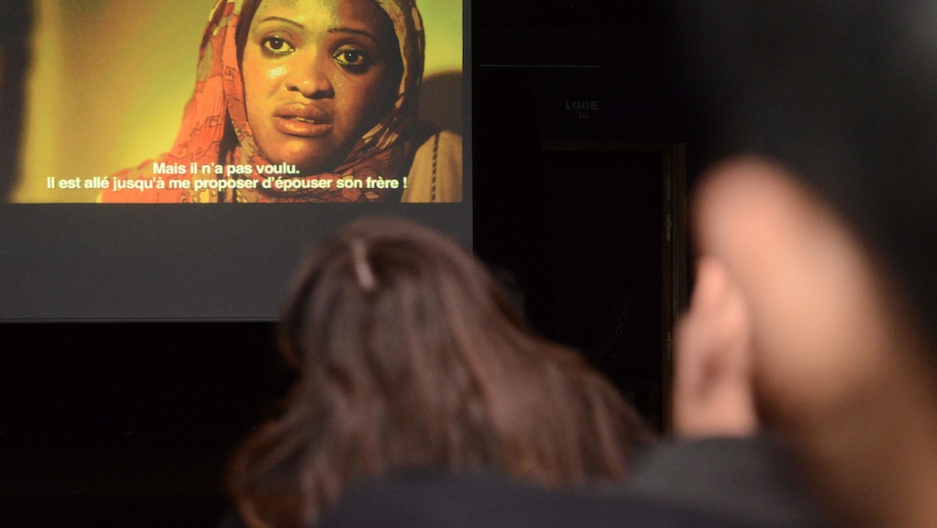 An audience watch a documentary entitled "475: break the silence," directed by Moroccan director, Hind Bensari, during its premiere on March 28, 2013 at the Boultek Cultural Center in Rabat. The documentary talks about victims of rape and is based on the practice made valid by article 475 of the Moroccan penal code, which allows men accused of raping minors to avoid prosecution if they wed their victims.
Credit: FADEL SENNA
Share

RABAT, Morocco — As the sun set behind the train station in Morocco’s capital, a young man sat behind a café window watching protesters march past the parliament building, demanding jobs from the government.

Youness Belghazi, who once was an active member of one of the biggest protest movements in Morocco, no longer marches. Now, Belghazi said, he uses the camera he held firmly in his lap as his weapon against the injustices he says his country faces.

Belghazi and other former activists have begun fundraising for a new kind of movement, a “Festival of Resistance and Alternatives,” which took place in Casablanca this weekend, from Feb. 20—the anniversary of the start of the Arab uprisings in Morocco—to Feb. 23, in an effort to exchange ideas and stimulate critical thinking in Morocco.

When the Arab Spring reached Morocco in early 2011, Belghazi, 23, joined the February 20 Movement that demanded radical reforms in the country.

While not asking for a change of regime (Morocco is a monarchy), they marched for months asking for more freedoms and social equality. Some of their demands were met by a new constitution. After that, the movement weakened and demonstrations stopped in 2012.

Belghazi has a laissez-faire demeanor and ear-to-ear smile, but it in no way lessens his passion, intensity and desire to bring something new to Morocco. Though many activists quit protesting, Belghazi said he hopes change can still come to the North African country, this time through independent film making.

Belghazi decided to turn to what he calls "artivism," a form of protesting using art, like documentary filmmaking.

He was introduced to the idea of using independent documentary film making as a form of civil disobedience by another activist, Nadir Bouhmouch, during the February 20 Movement.

“What better way for a filmmaker to express the fact that there is a lack of freedom of expression than by actually exercising it against the law?” Bouhmouch said. “Documentary film making has a chance of significantly altering people’s lives.”

A new movement called Guerrilla Cinema was born out of this determination and brings together about 30 young adults, including Belghazi, Bouhmouch and others who are former February 20 activists.

The group took the concept of “Guerrilla Filmmaking,” a term used to describe low-budget films that don’t meet production requirements of the government or film studios, and began shooting their own independent documentary films without government permits.

Their goal, they said, is to expose stories not told by traditional news outlets, which are controlled by the Moroccan government.

The public showing for their most recent film “Basta!,” released March of 2013, was held in the basement theater of the French Institute in Rabat. The film addresses censorship in Morocco and on that night was viewed by an audience of 30, who also participated in a heated debate following the film.

One viewer, who would give only his first name, Anass, said that these films raise awareness among Moroccans.

“People are often skeptical of subcultures [like documentary film making] because they are something new and so they get neglected in the media,” he said. “They should continue fighting though, because this is the only way we have right now.”

Sally Shafto, a film scholar and former journalism professor at Ibn Zohr University in Ouarzazate, Morocco, attends many film festivals around the country looking for the best and most recent films. She said she has seen more documentaries since the Arab Spring began.

Shafto points to the Oscar-nominated original Netflix documentary, “The Square,” by an Egyptian-American filmmaker Jehane Noujaim. “The Square” was released in January and follows the successes and failures of the protests in Tahrir Square in Egypt’s capital, Cairo, from January 2011 until summer 2013.

Bouhmouch, 23, is now studying at San Diego State University. He is the director, producer and writer of “My Makhzen and Me,” an online documentary film he released in 2012 about the development of social protest in Morocco and the government corruption that he says hinders the country's growth.

In fact, Bouhmouch said filming was paused for a few weeks because the Moroccan government sent agents to observe the production of his film and even sent a letter to his father asking him to intervene. But Bouhmouch continued to film the 40-minute documentary, which stars Belghazi and other co-founders of the movement.

“Get up, wake up, speak for yourselves!” Belghazi said at the end of the film.

The members of Guerrilla Cinema have created short films, never longer than one hour, some individually and some in smaller film crews, which include: “The Mask,” “Uprooted,” “475 le Film,” and “Basta!” These films have all been made on tiny budgets within the last two years—usually taking no more than a couple months for a small film crew to shoot and edit.

One of their projects, “475 le Film,” tells the story of Amina Filali who killed herself in 2012 after being forced to marry her alleged rapist. The name comes from article 475 of the Moroccan penal code, which stated that charges could be dropped in cases of statutory rape if the two parties get married.

The law was designed to protect the honor of the girl and her family but it sparked heated international protest and was changed in January, no longer allowing alleged rapists to escape prosecution for statutory rape by marrying their victims.

Houda Lamqaddam, is a 22-year-old computer science and communications student at Al Akhawayn University in Ifrane, and also the narrator of “475.” Lamqaddam said she has been a victim of rape, and that her experience contributed to her desire to be involved with the film. This film, she went on to explain, tells a more accurate story than what was reported in western media.

According to Lamqaddam, the media portrayed “very oppressive and misrepresentative views of Moroccans and the girl’s situation. We didn’t want to create this fake representation of the Arab world.”

The online film was shot with minimal camera equipment and a small crew. They traveled to Filali’s village to meet her parents and said they were shocked by how many details were left out of Moroccan and western media reports on the case.

Receiving its funding from donors through a Kickstarter campaign, Guerrilla Cinema’s goal is to bring what's happening in Morocco to an international audience. But because Guerrilla Cinema is not recognized by Morocco's state run cinematographic center and no members have filmmaker’s permits, they have to create and screen their films in places other than government-run movie theaters.

They have also shown their films publicly in the US, Spain and Turkey—mostly in international institutes, human rights associations and universities.

For his part, Nadir Bouhmouch recently left Guerrilla Cinema to use his location as a student at San Diego State University to create a global discussion about Morocco, speaking at American universities and international conferences.

“The Moroccan people have been swindled out of their right to a real democracy, to human rights and to the dignity we deserve,” he said.

Allison Shirk spent several months in Morocco on an SIT Study Abroad program and produced this story in association with Round Earth Media, a nonprofit organization that mentors the next generation of international journalists.