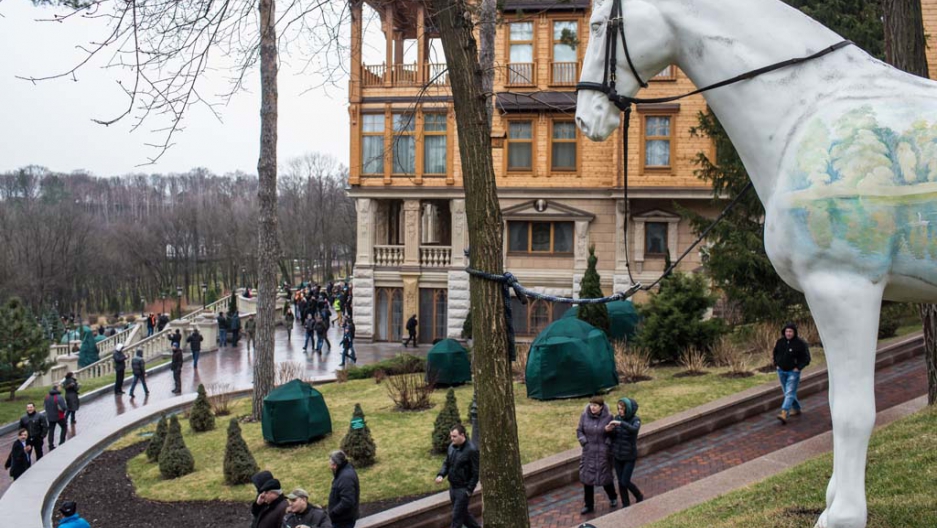 Ukraine. Remember when it all began?

A year ago, after months of anti-government protests, President Viktor Yanukovych fled his Kyiv residence and was finally impeached. Since then, a ceasefire has managed to tamp down combat along some parts of the frontline, though both sides accuse the other of regular breaches.

Something else worth remembering: what Yanukovych left behind.

Protesters had their run of the presidential compound after Yanukovych fled, and here is a list of what they found:

Yanukovych. Keepin' it classy with curative beehives and decorative wood.

"It's just like being in Monaco" - man on phone next to me at Yanukovich's residence outside Kiev pic.twitter.com/FZfU6xNHIp

Made a revolution? Chill out by playing golf at abandoned residence of fallen ruler via @Golos106fm pic.twitter.com/1FSrjiiSUS

3) He probably has a vintage car collection

4) And a huge friggin' boat

People of #Kyiv swarm over President’s estate, learn he has a boat there. A big one. http://t.co/1DSJHprqrJ pic.twitter.com/sFLNeVlnIz

5) That has lots of little baby boats

Yanukovych had a thing not only for vintage cars, but apparently for boats too via @Golos106fm pic.twitter.com/TE1S1LKd8p

6) And still room for other fancy stuff in the garage

9) Or your very own church

10) And a very personal bar selection

#Yanukovych brand vodka - wonder what the heck he was really drinking all this time? -- #Ukraine #Mezhyhirya pic.twitter.com/WGq1Odglj7

11) Yanukovych maintained connection to the people through karaoke

17) The pigs, for one, miss Yanukovych

Translated“@A3AP: Yanik used to lie on these beehives, with bees creating a 'curative field'"http://t.co/Jp4zcmmPBx pic.twitter.com/8krW4UlLQj”

Inside the presidential spa - the hat says "main banya (sauna) attendant", wonder who will be using it now? pic.twitter.com/KkFlX0waDh

22) Lest you think it's all frivolity, there are mountains of files on opposition journos

24) Also records of $3.8 million worth of wood decorations

25) Here is what some of the wooden decorations look like

Golden bread loaf allegedly found in Yanukovych residence. Not sure what that signifies. MT “@Uberkatze: pic.twitter.com/gQhitKsA5k”