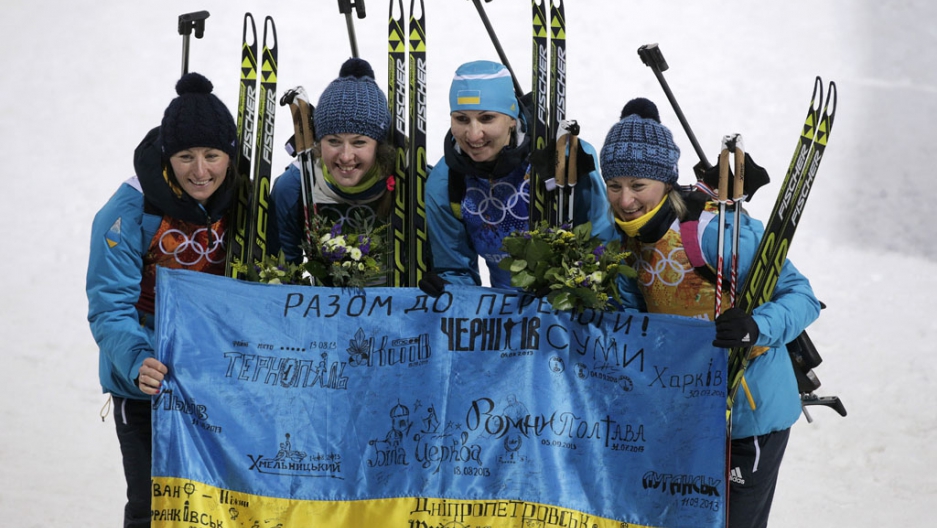 Sometimes, it’s best to let others celebrate your Olympic gold medal for you.

Ukraine won its first event at the 2014 Winter Olympics in Sochi on Friday, taking the top of the podium in the women’s biathlon relay.

Instead of jubilation, however, the team was subdued given political crisis that has claimed more than 70 lives at home in the past week.

"We will not celebrate because it’s not time for celebration," said Sergei Bubka, head of the Ukrainian team at Sochi.

"We will be peaceful. It’s a very sad moment for our nations, and our team belongs to the nation; we’re all together," he said. "It’s historical because we have a very difficult moment in our country and of course it was not easy for us to focus and continue the competition."

Protests have plagued Ukraine for months after President Viktor Yanukovych shunned an agreement with the European Union in favor of closer ties with Russia.

Bubka said, through Twitter, that he believes the gold medal can unite Ukraine. He said there were never any thoughts of withdrawing from Sochi.

Lebanese skier Jackie Chamoun found herself digging out of controversy last week, but she didn’t let it derail her Olympic pursuits on Friday.

The 22-year-old athlete finished 47th overall in women’s downhill — third from the bottom, but better than 25 racers who fell and didn’t finish — just days after a YouTube video surfaced showing her topless.

The three-year-old topless photos elicited a polarized reaction in her native Lebanon, a conservative Middle Eastern country, when they resurfaced as the Winter Games began.

Video of that photo shoot rekindled that debate just as she was to compete.

“Seriously, I didn’t think about that at all today. I was here, happy to do the race, and I was focused,” she told Agence France-Presse. “Small things are not going to disturb me even if it was a big story in my country. I just continue; it’s not a big obstacle.”

“I got a lot of messages from Lebanese people on Facebook, on social media, just telling me: ‘We don’t need your medal. We don’t need you to win. We’re just glad that you represent the country, and you do it very well,’” Chamoun said.

More from GlobalPost: This photo will make you rethink the topless skier story

A champion German biathlete and an Italian in the bobsled are home after positive drug tests, the first for Sochi.

Evi Sachenbacher-Stehle and William Frullani each tested positive for methylhexanamine.

The drug is a nasal decongestant once marketed as a dietary supplement, but it can also cause heart attacks.

“This is the worst nightmare you could imagine,” said Sachenbacher-Stehle, who finished fourth this year. “I can’t explain how the doping test could be positive.”

Frullani, a police officer, was replaced on the Italian sled for Saturday’s event.