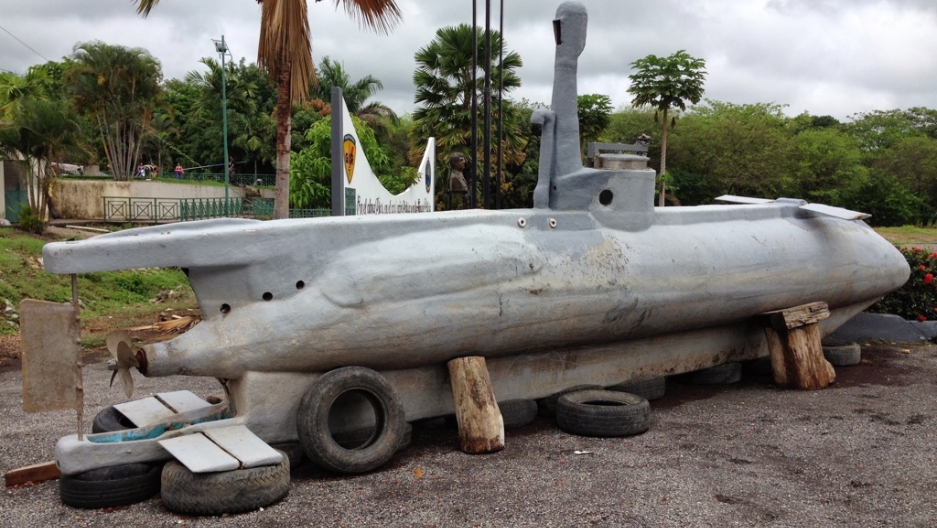 Ecuadorean police seized this homemade narco submarine, which travels at 10 mph, has no oxygen tanks and can dive for just 15 minutes.
Credit: Simeon Tegel
Share

GUAYAQUIL, Ecuador — If smuggling cocaine onto an airplane sounds dicey, then imagine navigating 2,000 miles on the open sea in a homemade submarine with half a ton of the white stuff and no oxygen tanks.

This 30-foot fiberglass sub can dive just 15 feet and stay under for a maximum of 15 minutes — barely long enough for passing coastguard patrols to disappear. It has no toilet, kitchen or, for that matter, legroom.

Even four months after Ecuadorean police captured it at a clandestine dock deep in a mangrove forest, the smell of diesel fumes inside the vessel is overpowering.

The submersible highlights this nation’s burgeoning reputation as a transit point for cocaine out of the Andes and onward to the streets of New York, Sydney, Moscow and Bangkok.

During a 10-day Pacific journey up to Mexico, its two-man crew would literally be sitting atop their cargo, with a street value in the United States of some $50 million.

The risk of being caught in an ocean swell or one of the hurricanes that annually batter Central America might make the common smuggling tactic of swallowing a cocaine-stuffed condom and boarding an international flight sound like a smart, safe thing to do.

No wonder Juan Carlos Barragan, the police general in charge of Ecuador’s counternarcotics strategy, describes the rudimentary vessel now stored at a Guayaquil police base as a “death cage.”

According to the US State Department, 110 metric tons of cocaine pass through Ecuador every year (page 155 of this report). Much of that makes its way through Guayaquil, the country’s largest city and principal port, with its excellent transport connections, including freeways and an international airport.

With no local tradition of growing or consuming coca, Ecuador has long reveled in its oddball status as an Andean nation that produces virtually no cocaine.

In 2009 it had fewer than 62 acres of the troublesome bush, whose leaves are the key ingredient in cocaine, according to the most recent United Nations statistics.

Growing coca is outlawed here, unlike in Bolivia or Peru. In those countries, locals chew it or brew it into tea as a natural stimulant or medicine, just as they had done long before cocaine was invented by a German chemist in the 19th century.

But geography is key: Ecuador is sandwiched between Peru and Colombia, the world’s Nos. 1 and 2 cocaine producers, respectively.

Together, the two leading growers have some 386 square miles of coca fields — almost the size of San Antonio, Texas — and some 90 percent of the global total. A growing amount of their exports is now passing through their tiny neighbor, Ecuador.

And, Barragan says, the drug flow is increasingly controlled by ruthless Mexican cartels that have drenched much of Central America in blood, triggering a gradual rise in narco-violence here.

The sub would have cost around $500,000 to manufacture, the undercover agent who tracked it down told GlobalPost. It’s just one of several captured in Ecuador and Colombia in recent years.

Using submarines is just one of the increasingly ingenious — and often downright reckless — methods the cartels use to move their wares to market.

Probably Ecuador’s most famous product, bananas, has served as obvious cover. Plastic fruit packed with drugs is frequently found by sniffer dogs in the Guayaquil docks.

In October 2012, Belgian authorities unearthed 8 metric tons of cocaine hidden in a banana shipment from Ecuador, one of the largest coke seizures anywhere.

Another common tactic is for traffickers to hollow the stems of flowers, a major Ecuadorean export, and fill them with cocaine.

Barragan estimates the authorities intercept roughly 30 percent of the cocaine passing through Ecuador. That of course means that more than two-thirds gets through.

“The drug traffickers are actually trying out lots of new routes, all over the place, especially to go to Europe and to Russia and even Australia,” he says.

“One of the reasons for that is the growing demand there but also that there is a falling demand in the United States.”

Cocaine is actually thought to be more expensive Down Under than anywhere else on the planet, with a kilogram of the white stuff costing up to $300,000, according to the Australian Crime Commission (page 225).

That makes the “Pacific route” one of the world’s most lucrative for drugs.

It made headlines in November 2012 when a yacht loaded with 450 pounds of cocaine, and the corpse of a Serbian national, washed up in Tonga.

The ship set sail in August that year from Guayaquil with two people aboard, bound for Australia, before running into trouble.

The cadaver was too badly decomposed for authorities to establish a cause of death. It remains unclear whether the other crewmember fell overboard or escaped alive.

In spite of all the cocaine that makes it past the authorities, Ecuador is scoring some major successes against the cartels.

Yet those figures are all smaller than the 2009 haul: a whopping 68 tons.

That was the last year that Washington still coordinated anti-drug operations in the country — until leftist President Rafael Correa ended the US lease on the Manta military base.

Correa regularly jousts with Washington, including booting out the US ambassador in 2011 over the WikiLeaks cables and offering asylum to the website’s founder, Julian Assange.

The US Agency for International Development, Washington’s foreign aid arm, is now planning on pulling out of Ecuador by year’s end, despite having already earmarked $32 million of anti-poverty projects for the country, in frustration at what US officials see as roadblocks from the Correa administration.

Scaling down the US’s involvement in its counternarcotics strategy clearly hurt Ecuador’s capacity to fight the drug lords, at least temporarily, says Bruce Bagley, an expert on the drug trade at the University of Miami.

But Ecuador’s counternarcotics fight appears not to be a source of tension with Washington.

“Correa has promised to extirpate drugs from the country,” Bagley adds. “The US likes that kind of rhetoric. Although it regards Ecuador’s strategy as incoherent, it doesn’t want to fight with Ecuador and recognizes that there is a real will to confront the cartels.”

The US Drug Enforcement Agency’s Ecuador office declined to comment for this story. But Washington has publicly recognized the country’s efforts to stem the flow of drugs across its borders.

“The government has maintained Ecuador virtually free of coca production since the mid-1980s, and is working to combat money laundering and the transshipment of drugs and chemicals essential to the processing of cocaine,” the State Department notes.

Rather than spend too much time busting users and drug mules, Ecuador has set out to use intelligence to nab targets higher up the gangs’ chains of command.

It was that straight-to-the-top approach, and a tip-off from an informant, that led agents to seize the submarine. And it has even earned the country accolades from the UN.

Yet so long as there’s demand for cocaine in the US and elsewhere, Ecuadorean law enforcement will have its work cut out to intercept as much drugs as possible.

And the smugglers are likely to continue attempting to outsmart them to get the white stuff to market.