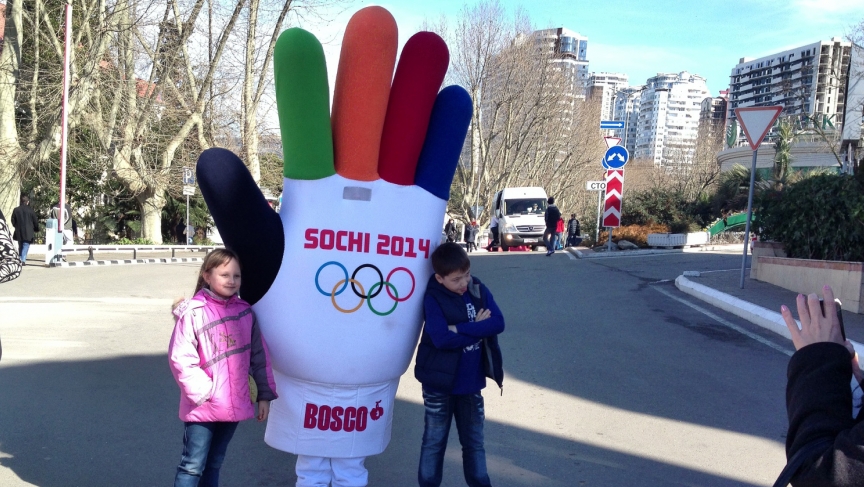 Children pose for a picture outside of the Sochi Olympic Park.

Russia never seemed to settle on just one slogan for the Sochi Olympic Games. "Hot. Cool. Yours" was the official theme.

Let's just admit that doesn't really make sense. But emblazoned on an enormous building in Olympic Park, there is one that does.

That's really the message Russia had hoped to send at these Games, and one that you hear a lot of people say journalists went out of their way to ruin.

"I was so excited about coming and then I kept hearing things in the media about, you know, not to go," says Nancy Blair, who traveled to Sochi from Vancouver, Washington. "It's not safe. And yet I don't think it helps if there's a lot of negative talk. It doesn't."

Blair, who is attending her fourth Olympics, says the Sochi Games stack up with any she's experienced.

"It's been a wonderful experience here," Blair says. "The weather's great. The people are friendly. Good security. I like that they're checking people. I'm just on the seaport now and it's just exciting. I haven't had any problems at all."

That's what is so weird about the Sochi Games. At the events, everything is kind of ... great.

But is it real?

Everywhere you look, exceptions have now become the rule. This is a Russia where cheerful people come up and say, "May I help you?" wherever you go. Believe me, that doesn't usually happen.

A Russia that recycles? No, sorry.

And suddenly police are helpful. The customer service is half-decent. Smokers obey "no smoking" signs. None of this usually happens.

But according to a man named Alexei, who traveled from the Russian city of Volgograd to take in Olympic skiing, all that matters is it's happening now.

"The only people who don't like this are the ones who stayed home on their couches," Alexei says. "Everyone who is seeing it with their own eyes sees it's wonderful. The volunteers are so cheerful. Everyone walking around is so postiive. Everything's organized well."

That Russia would put its best face forward is not suprising, of course. But local rights activists say a different story must be told.

Thousands of migrant workers who built the Olympic arenas were deported shortly before the Games — many without pay. Environmental activists, too, have faced pressure, including the arrest of Evgeny Vitishko, who was sentenced to three years in prison for protesting the Games.

Athletes and spectators aren't to blame for enjoying themselves in spite of this, says Semeon Semenov, a local human rights activist. But he says he hopes they would be aware and help improve the situation.

"The Olympics are supposedly about promoting humanism and human rights," Semenov says. "It's all in the Olympic Charter. When they prepared for the Olympics, the government said Sochi would set an example for all of Russia. Well, now I see it's a bad example."

Another naysayer is Georgi, who didn't want us to use his last name. Georgi is a local businessman who runs a small iPhone repair shop in downtown Sochi.

"I don't know one person who's for the Olympics," Georgi says.

"Yes, these Olympics mean they've built better roads and added infrastructure," he says. "But people pay taxes and the government should have built these things anyway. Why didn't they do that earlier?"

As we step outside to talk more, Georgi points out the sign on his shop. At first glance, it's that iconic Apple logo we all know.

Only Georgi says that, to avoid any problems with the guys at Apple, he's altered it just a bit. And it's true. The bite from the apple is a bit deeper, the stem a little fatter.

Now, would I have noticed if he hadn't pointed out the difference? Probably not.

As with Russia's Sochi Olympics, what you see depends on how hard you look.