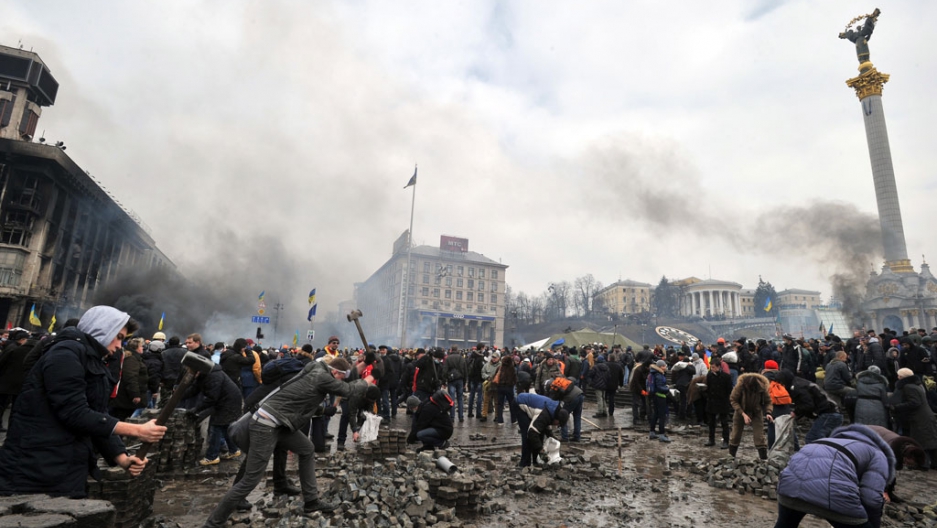 Anti-government protesters dig up cobblestones to use them as rocks against riot police on Kyiv's Independence square on Feb. 19, 2014
Credit: Genya Savilov
Share

Christopher Miller, an editor at the English-language Kyiv Post and a GlobalPost contributor, has been covering the months-long protests in Kyiv. The capital's Independence Square erupted into unprecedented violence Tuesday night as Ukrainian riot police tried to clear demonstrators from their protest camps.

By Wednesday morning, the death toll exceeded 25, with hundreds more wounded. It was the bloodiest 24 hours since the demonstrations began. As night fell on Wednesday, protesters were braced for Ukrainian authorities to once again try to clear EuroMaidan, as the encampment has come to be known. Before midnight, however, President Viktor Yanukovych said he had reached a "truce" with opposition leaders, and agreed to a "start to negotiations with the aim of ending bloodshed."

The truce, however, appears to have fallen by the wayside as a fresh round of violence broke out on Thursday morning. "Bells from nearby St. Michael's Monastery rang out as a barrage of gunfire from police snipers perched atop central buildings rained down on protesters at central Independence Square, the epicenter of the anti-government protests that are now in their third month. ... They [protesters] hurled Molotov Cocktails and stones and fired air rifles at police," Miller wrote in Mashable.

Miller gave GlobalPost the view from the ground.

listen to ‘Current mood in Kyiv’ on Audioboo

Summary: Right now in the center of Kyiv and elsewhere around the country, the situation is very tense. Down on Independence Square, protesters are hunkering down and preparing for what they feel to be an imminent attack by police forces again tonight. We’ve heard some ominous messages from the government earlier today — from the Security Service of Ukraine and from other government officials that these anti-terrorist operations are now in play.

It certainly could further inflame these already extremely violent protests.

Has there been an increase in the number of radical protesters?

listen to ‘Radical protesters’ on Audioboo

Summary: Depending on who you want to call a radical protester, there are groups that have used more militant approaches. These are groups like the far-right Rights Sector … they are comprised of a number of members of far right groups, mostly from Western Ukraine. There are also some militant units of the opposition Svoboda party that have been on the frontlines.

And how organized are the protesters? How are their living conditions?

listen to ‘Organization of the protesters’ on Audioboo

Summary: Since the protests began, they’ve been very well organized. Right now it’s a little chaotic on the square, given that they were pushed out of their headquarters, which was the Trade Unions House near Maidan … Tonight, they are taking shelter in the nearby central post office.

They are setting up medical centers. They’ve set up a new medical center in a monastery — St. Michael’s monastery, which is a few blocks away from central Independence Square. … There are priests saying prayers over the wounded. I believe there are some field kitchens set up on the square.

This interview was edited for length and clarity.