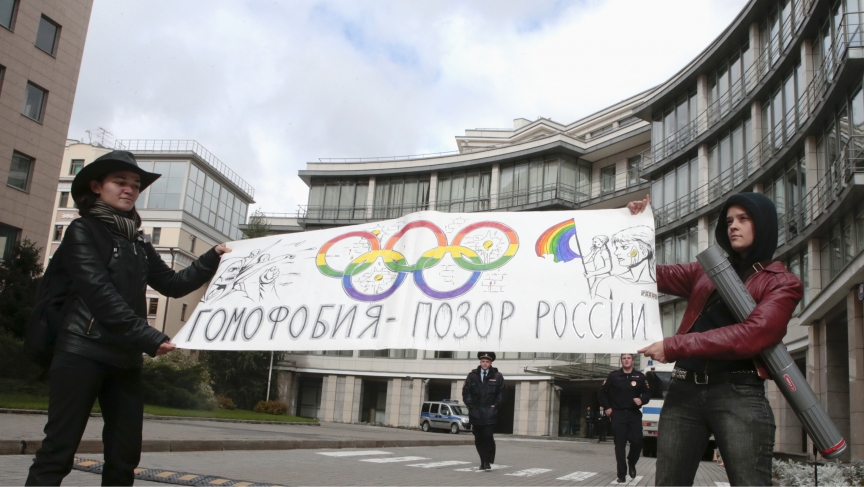 Gay rights activists in Moscow held a banner that reads "Homophobia is the shame of Russia," as they protested in front of the Sochi 2014 organizing committee building in Moscow on September 25, 2013.

When Russia passed a new law to clamp down on LGBT "propaganda" in June, a gay Russian decided it was time to leave.

He plotted his course from Russia to Cuba, then on to Mexico, where he found his way to a place he'd identified on Google Maps to cross the Rio Grande River.

He walked into the US at about 2 o'clock in the afternoon. Spotting a mounted camera, he walked toward it and found a patrol car.

"I went over there and I asked them, 'Is this American territory?' They said 'Yes, this is America.' So at that point, I said 'I'm here to seek political asylum,'" recalled the Russian man who asked that his real name not be used in this story.

He speaks almost no English, so we talked through an interpreter. He now lives in a Russian neighborhood of Philadelphia and doesn't feel safe being publicly "out." So his lawyers refer to him as S.R.

In Russia, S.R. says he experienced random harassment and attacks in public, acts that Human Rights Watch believes have escalated over the last year.

In June, Russia banned the spread of "propaganda of non-traditional sexual relations" among minors and made it a crime to distribute material on gay rights, effectively stopping public discussion of LGBT issues. The law has since been broadly enforced.

Joe Catuzzi, a law student at Villanova University who became involved in S.R.'s case, explained that Russia only decriminalized homosexuality in 1993. "It was previously a crime to just be a homosexual," he said.

"But then, starting around 2005, you had different regions in Russia starting to pass these anti-gay propaganda laws and then that basically came up to the national level, where it was signed into law by a margin of 236 to 0."

S.R. says the propaganda statute turned into law what was already part of Russian culture. The Pew Research Center found last year that just under three-quarters of all Russians believe homosexuality is morally unacceptable.

In that atmosphere, S.R. said he began to fear going to prison. "A person can only be patient and withstand something so much until eventually you just decide, I need to leave — and find a new life," he said.

While Russian police have beaten up participants in gay pride parades, S.R. said he had seen videos of New York City pride celebrations and those showed him the possibility of a different world. "People were dressed up and they weren't promoting any propaganda — they were just celebrating who they were and celebrating the fact that they were happy to be here," he observed.

S.R. said he tried to get a tourist visa to the US, but was turned down. So, finally, he resorted to entering the country Illegally. And as a result, he spent his first five months in the US at a detention facility.

He was sent to York, Pennsylvania, home to one of the biggest immigration detention centers on the US east coast.

About 800 migrant detainees live in the middle of rural, central Pennsylvania. With no foreign language resources in the inmates' law library and no Russian interpreters available, S.R. struggled to prepare the paperwork to apply for asylum.

"Honestly, my biggest fear was that I would get deported. That's what was always on my mind — right when I went to sleep, and right when I woke up."

When law students Joe Catuzzi and Michelle Majkut, who were recruited by a nonprofit to assist in the case, first met S.R., he had a black eye. Another detainee had beaten him up, he said, while calling him gay slurs in Spanish.

Between the visits of the law students, S.R. spent his time writing out longhand accounts of his experiences for his counsel. Working closely with another Russian-speaking law student, Igor Ponomarev, Catuzzi and Majkut helped prepare 700 pages of supporting material for S.R.'s case.

In November, S.R. was released from the detention center and granted asylum on the same day. He left wearing the shorts and sandals he was wearing when he crossed the border, recalled Catuzzi.

"We went in the car, turned up the heat because it was pretty cold that day, and then as we were driving, the first stop we saw was a Walmart. We thought, 'Let's go in and do what we can and get some stuff together.'"

Today, S.R has one month of English classes under his belt. He's looking for a job and getting his footing in his new neighborhood.

Spending his first months in custody has not dampened his enthusiasm to be in the US. And he may soon have more company in the United States. Asylum applications from Russia were up 16 percent last year, according to Russian news agency RIA Novosti.

Organizations that work with immigrants say, anecdotally, that a growing number seem to be fleeing Russia because of the anti-gay environment.