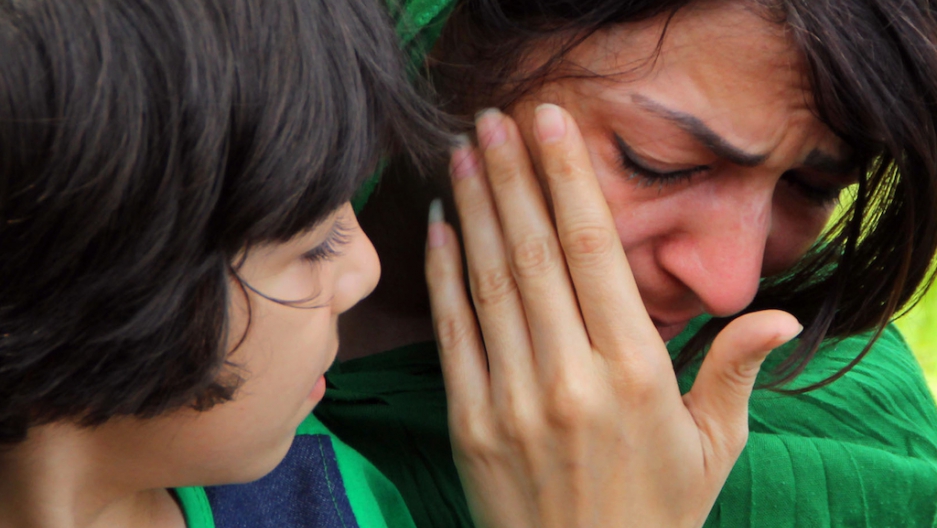 Here's who Tony Abbott is turning back: Asylum seekers from Pakistan, photographed at a hotel in western Java. The group of 34 from Iran, Bangladesh, Nepal and Pakistan were heading for Christmas island, and were turned back by Australian Navy according to Indonesian authorities.
Credit: Bustomi
Share

JAKARTA, Indonesia — At first, the locals didn’t know what to think when the strange vessel washed up on Indonesian shores in early February.

Resembling a small dirigible, the fully enclosed lifeboat was equipped with a navigational system, air conditioning and a small engine. It had 90 seats and seat belts, lifejackets, food and water.

It was oddly swank, in other words, compared to the usual refugee craft.

It turned out that the vessel was one of about twelve lifeboats Australia reportedly purchased for $40,000 each, to “push back” migrants seeking to reach Australia, arguably in violation of international law.

In recent years, thousands of refugees have flown to Jakarta, or crossed the sea to Indonesia from neighboring Thailand, Malaysia or Myanmar. Then they have boarded rickety wooden ships in hopes of reaching Australia’s Christmas Island, about 220 miles off Indonesia’s southern coast. From there, they seek asylum status in Australia.

Ever since Tony Abbott was elected last September on the slogan “stop the boats,” they have been explicitly unwelcome, despite international conventions granting them the right to a fair asylum procedure.

Abbott’s “Operation Sovereign Borders” began pushing refugees back in December, 2013. Some 250 asylum seekers, traveling in six boats, have been returned to Indonesia. Some were taken in the orange lifeboats. Others were escorted or towed back by the Australian navy, according to Australia’s Fairfax Media. Indonesia is the main embarkation point for would-be refugees to Australia.

With his immigration minister, Scott Morrison, recently claiming that no boats had entered Australian waters in almost two months, Abbott is “pleased” with the results. He likened people smugglers to “the enemy” to justify his government’s refusal to detail the Australian navy’s methods, calling it a matter of “national security.”

"In the end, we are in a fierce contest with these people-smugglers,” Abbott said. “And if we were at war, we wouldn't be giving out information that is of use to the enemy.”

Despite Morrison’s claims, several asylum seekers have insisted they were arrested on Australian waters. The asylum seekers found in the orange lifeboat last week said they were just about to reach Christmas Island when their boat was intercepted. In January, another group of asylum seekers claimed to have beached on a small Australian island off the city of Darwin, before being arrested and forced back into their wooden boat.

“Because the entire policy is shrouded in secrecy, it’s very difficult to know whether this is happening in international waters, Australian waters, Indonesian waters,” she says, referring to the “national security” argument as a “very convenient excuse.”

The Australian government is also facing allegations of torture, after the country’s public broadcaster ABC released footage of migrants with burned hands. The victims claimed members of the Australian navy had forced their hands onto an engine’s hot pipe while they were turned back to Indonesia.

“It is quite worrying that what happens at sea is staying at sea,” says Pearson, calling for the navy to investigate and share its findings with the public.

The UN refugee agency has also warned that the government could be breaking international law. Last month in Geneva, the agency’s spokesperson Adrian Edwards said it would be “concerned by any policy or practice that involved pushing asylum-seeker boats back at sea without a proper consideration of individual needs for protection."

The Australian methods are also not appreciated by Indonesian authorities, who have made that very clear, on several occasions.

“On the push-back policy itself, let me put our rejection on the record. Pushing back the boats is not a solution,” said Indonesia’s foreign minister Marty Natalegawa last month.

Adding to that, Australia has also infuriated its neighbor by admitting to repeated “inadvertent” incursions in Indonesian waters, a claim experts find hard to believe.

"I studied in Australia, in the military academy. The Australian navy doesn't have wooden boats, they have warships equipped with modern technology," retired Indonesian general Tubagus Hasanuddin told the ABC. "They should have known which part of the water is Indonesia and which is not."

Australia has since apologized, but Indonesia has sent its own navy boats to monitor its borders and warned the revelation would worsen relations, which have already deteriorated over the last few months.

In November, Indonesia downgraded its cooperation with Australia following the discovery that Australia had tried to tap the phones of Indonesia’s president, his wife and several members of his inner-circle.

Ironically, one of Tony Abbott’s other electoral slogans was “Less Geneva, more Jakarta,” meaning that his foreign policy would be focused on immediate neighbors, not far-flung Western powers.

His first foreign visit was, as promised, to Indonesia, where he assured president Susilo Bambang Yudhoyono a relationship of “no surprises, based on mutual trust, dependability and absolute respect for each other’s sovereignty.”