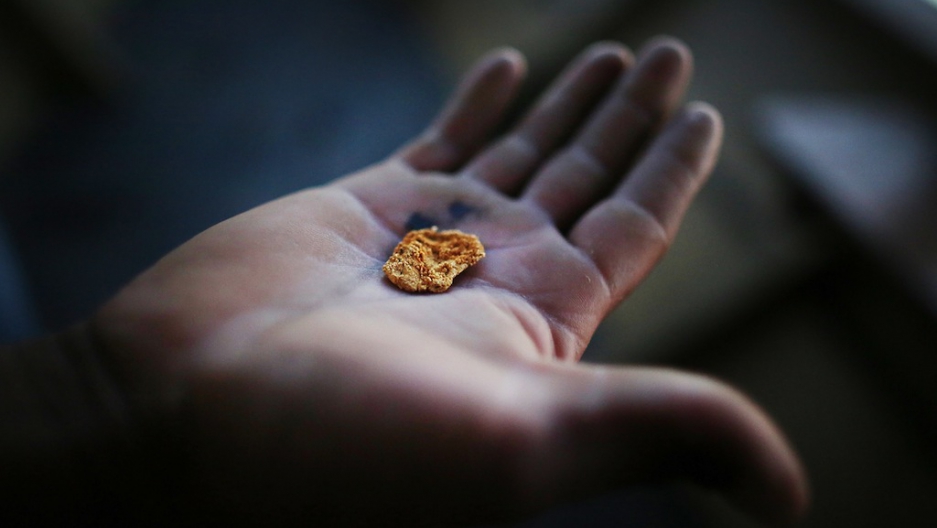 A gold miner displays a piece of gold after it was burned down to remove the mercury along the Madre de Dios River in the Amazon lowlands on November 14, 2013 near Puerto Maldonado, Peru. Small-scale miners are drawn to the area in hopes for higher pay but often face abysmal conditions. Gold is usually amalgamated with mercury during the process of informal mining in the region, which is discharged into the water supply and air, poisoning fish and sickening people in the area.
Credit: Mario Tama
Share

NEW YORK—The global fight for environmental health got a boost recently: the World Health Organization urged governments to provide health care for people suffering from mercury exposure. It also called for speedy ratification of the new international mercury treaty. Countries around the world should take their cue from the WHO.

Mercury causes brain damage and other debilitating conditions, and is particularly harmful to children, whose systems are still developing.

One of the main uses for mercury is small-scale gold mining. In Africa, Asia and Latin America, adults and children who work in gold mining mix mercury into the ore that contains the gold. The mercury attaches itself to the gold, separating it from other materials. Then they burn off the mercury to retrieve the pure gold.

In central Ghana, I spoke to a group of boys who used mercury regularly as they worked in a small-scale gold mine. The youngest was 12. One of them, 14-year-old “Abou,” explained: “We pour the mercury on [the ore] and it brings the mineral together. It forms into one... Then we burn it… After I finish, the yellow colors come out… I don’t protect myself. I have been told when mercury enters your mouth it is poisonous and you can die.”

Abou is right. Mercury is highly toxic, but few miners know how to protect themselves. Adults and children whose work causes them to breathe in its vapor have been found to have highly elevated mercury levels, but mercury exposure can result even by touching the toxic liquid metal.

It is therefore great news that governments have recognized the threat of mercury and late last year adopted the treaty, the Minamata Convention on Mercury, committing to reduce both mercury use and exposure to it in mining and other sectors.

Crucially, under the convention, governments are obliged to address the health problems mercury has already caused, and to develop health strategies for affected mining communities. This is vital to protect the health of millions of adults and children exposed to mercury from mining globally—including Abou and his friends in Ghana.

Under the Convention, governments are also encouraged to provide care for all people affected by mercury exposure and to inform populations about mercury risks.

For too long, governments have considered health and environmental concerns two separate issues. Governments fought bitterly over the text of the Minamata Convention during the last round of negotiations almost a year ago.

The United States, Canada and the European Union did not want the convention to call for the direct involvement of health agencies into what they considered an environmental issue. But Latin American and African governments, as well as Human Rights Watch and other nongovernmental groups, pressed for a stand-alone article on health.

A compromise was found at the last hour, making some of the health measures in the treaty voluntary.

It is a positive development that the tide has turned. Governments around the world are making strong commitments to action on mercury—94 have already signed the convention, but 50 ratifications are needed for the convention to enter into force.

Rather surprisingly, the United States — infamous for being unwilling to ratify international treaties, even the Convention on the Rights of the Child — supported the WHO call for action. The US also just became the first country in the world to join the convention as a state party, by taking a step comparable to ratification. Ecuador, Brazil, Japan, Zambia, Switzerland and Norway—just to name a few—have already started the ratification process.

Juliane Kippenberg is a senior children’s rights researcher at Human Rights Watch who has done extensive work on child labor and mercury use in small-scale gold mining.