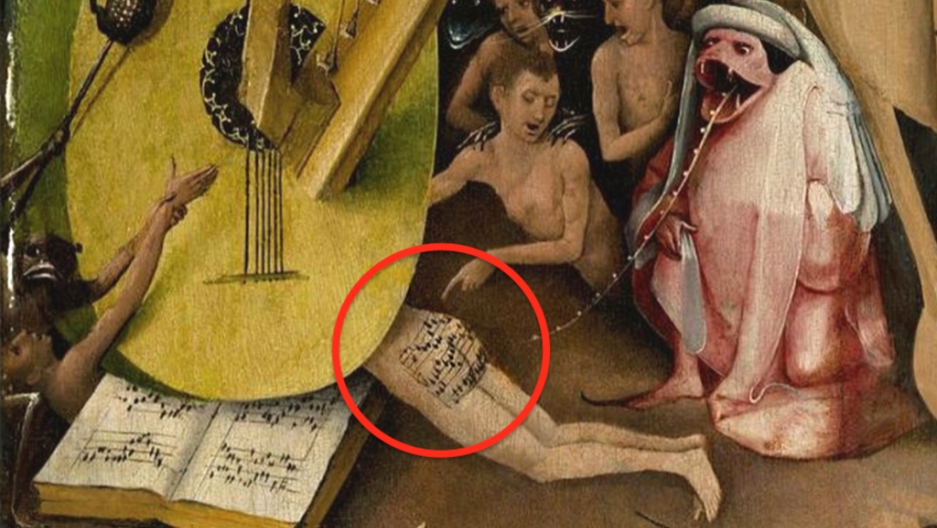 We now have a pretty good idea of what hell sounds like, thanks to medieval sheet music painted on a sinner’s butt.

This original contribution to human knowledge comes from Amelia, a music and information systems double major at Oklahoma Christian University. She also likes to blog about nerd things, for which we're eternally grateful.

Late one night, Amelia and her friend Luke were examining The Garden of Earthly Delights, the surreal triptych by Hieronymus Bosch, when they discovered something amazing:

“...music written upon the posterior of one of the many tortured denizens of the rightmost panel of the painting which is intended to represent Hell.”

After she stopped laughing, Amelia decided to transcribe the notes and record the song based on what she knew of Gregorian-era chants. Here's the result:

This inspired wellmanicuredman, another blogger, to turn Amanda's work into a full choral arrangement. It's everything you were hoping it would be: The 600 year old butt song has gone viral and Amelia's now working with her college’s music department to improve the accuracy of the transcription. Best independent study ever.

We have a problem: The science behind rising seas

The 30 most unlikely, adorable animal pairs