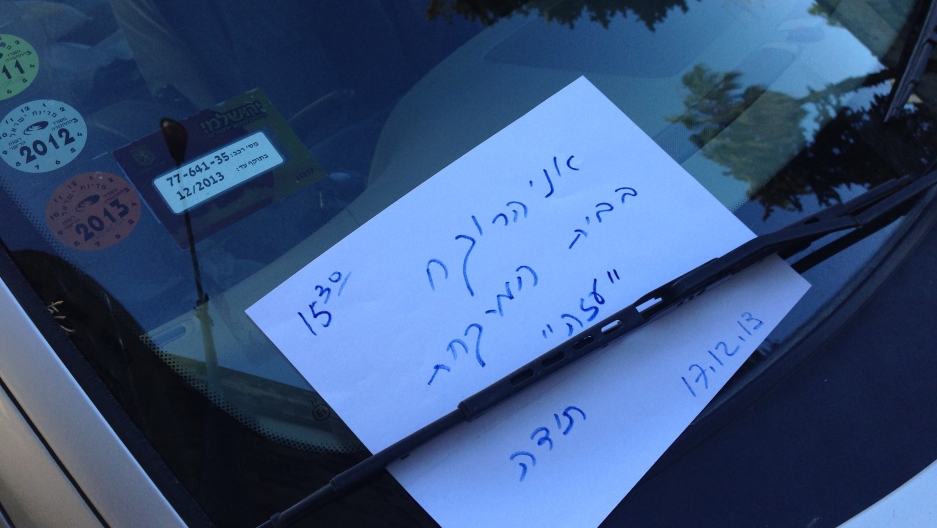 "I’m the pharmacist at Azza Pharmacy. Thanks."

Valentine’s Day isn’t widely celebrated in Israel. But Israelis do write love notes year-round — and leave them on their cars.

They’re scribbled on scraps of paper and wedged in windows. Or, they’re typed out and propped up on dashboards.

The most famous kind of note even has its own song, which some comedians recorded a few years back. It goes: “Officer, I’m unloading merchandise. I’ll be right back. Don’t give me a ticket.”

Israel is a tiny, crowded country with not enough parking spots. Hence, all the illegal parking, and the note writing.

Note writers follow a standard format. They begin with a courteous greeting: “Dear Officer.” Then the explain why they’re parked illegally, and why that’s ok, and why they do not deserve parking tickets.

My friend Keren in Jerusalem says she writes many notes like this: Dear parking inspector, the meter is broken. Please excuse me. Thank you very much.

Same goes for my friend Deborah, who lives near a soccer stadium in Tel Aviv. When she finds herself without a parking space during a game, she writes: Dear ticket giver, Please do not give me a parking ticket because I live here and I can’t park anywhere. Thank you very much, kindly, the neighbor

“I want to invoke a certain sentiment within this person who I don’t know,” Keren said. “I want them to like me.”

That’s the point of a love note, right? To get somebody to like you. But love notes to parking cops are totally different. You try to get him to like you — so he’ll go away.

“I think it’s funny,” said Jerusalem parking officer Yaniv Avraham at the start of his shift one recent morning. “You have times that the note really helps, and I do not write a ticket.” But sometimes, he said, “You see the note and you know, I must write a ticket.”

I had been waiting for this moment for many years — to finally talk to a real live traffic cop in Jerusalem.

Since 2011, I have been taking pictures of what I call "Love Notes to Traffic Cops." So I showed Avraham some photos in my collection to see how he would respond to the notes if he were to see them on the job.

When a driver writes “I’m dropping off my kids at kindergarten, please don’t give me a ticket,” he doesn’t. Avraham said it’s not fair to ticket a parent when everyone’s dropping off kids and taking up all the parking spots.

But there are times, he said, when people try to pull rank, writing notes like, “I’m the pharmacist at such-and-such pharmacy.” Subtext: I’m important. Don’t give me a ticket. Avraham said he does.

Then there are the kinds of notes you can only find in Israel: Honorable cop, We are sitting shiva [mourning for someone who has died] at so-and-so’s house. Here’s the address. Please don’t give us a ticket.

“In a situation like this, we do not give a ticket,” Avraham said.

Every day, parking cops get a list of where families are observing the Jewish week of mourning, Avraham said. When parking spaces run out, and visitors park illegally, they don’t get ticketed.

So, there you have it. In Israel, you can, in fact, convince parking cops not to give you a ticket. But why are Israelis prone to negotiate their traffic violations?

“In America, there is a great respect for rules, because of a deep commitment to equality. There are no exceptions,” said Yaron Ezrahi, a leading political theorist in Israel, who also writes notes to parking officers.

By contrast, Ezrahi said, “the Jewish state has an image of itself as an extended family” — the idea being that an Israeli argues with a parking officer like she’d argue with her sister.

“It started with the great tradition in Judaism of negotiating with God. There are several cases in the Bible of negotiations,” Ezrahi said. “So, if you can negotiate with God, why not with a traffic officer?”

Think about things from the traffic officer’s point of view: he’s not God; he’s just doing his job. The officer I met said he wants people to know that traffic officers can be nice guys, too.

Avraham said when he is out on the streets and helps people fix a flat tire, he uses it as a teaching moment. “I say, ‘I am a cop, and remember, I not only give a ticket.’”

That, you could say, is this traffic officer’s reply to all those super-sweet, I-hate-what-you-do, go-away love notes that Israelis leave for him on their cars:

Dear motorist, I’m lookin’ for some love, too.