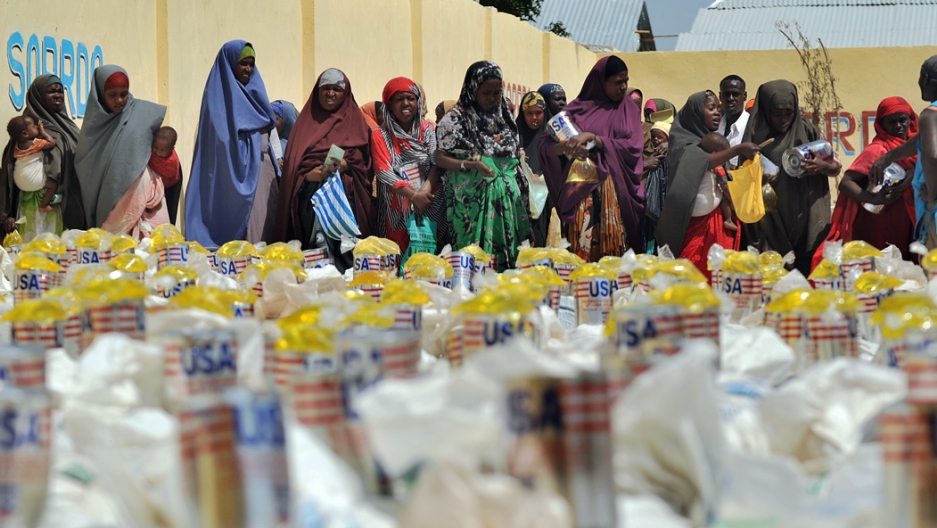 US aid packages at a relief center in Mogadishu, Somalia in January 2012.
Credit: Tony Karumba
Share

NEW YORK — As the White House puts finishing touches on its budget plan for 2015, most of the attention is focusing on domestic issues.

Will the plan call for higher taxes on wealthy Americans or restore long-term unemployment pay? Will it adjust for lower enrollment in Obamacare or will it raise education, research or infrastructure spending?

Ever since the late Republican Sen. Jesse Helms likened it to “pouring money down foreign rat holes” in the mid-1980s, the consensus that once underpinned Washington's spending on global anti-poverty programs has frayed.

Yet even realists who reject aid on purely moral grounds concede its value as a lever of American policy and influence around the world. For many countries, US aid represents the only official interaction they will have with the United States government. As former Republican presidential candidate Mike Huckabee and former Democratic Sen. Blanche Lincoln put it, “Helping people help themselves is a long-standing American value.”

Politically controversial and wildly misunderstood by the public, the money spent by the US Agency for International Development (USAID) to fight hunger and disease abroad is at a low ebb — and ever likely to stay there.

Not long ago, this appeared poised to change. In 2000, in the heady days of millennial celebrations, the rich countries of the world, led by the United States, launched an ambitious United Nations campaign known as the Millennium Development Goals (MDGs). The plan: to alleviate the worst global poverty by 2015.

With that deadline near, will Barack Obama's budget embrace or pay lip service to that challenge? Before answering that, a bit more about foreign aid, MDGs and the US budget process.

In spite of the flailing claims of ideologues on both sides of the US political aisle, for decades Washington’s foreign aid spending (minus the cost of invading other countries) has been plummeting. The chart below shows the percentage of US federal spending on such programs from 1965 to 2010.

A better way to measure this kind of trend is as a percentage of America’s annual economic production, or GDP. Gauged that way, the “charity” of the US taxpayer looks a lot different.

The downward trend that began in the mid-1960s reflected many things: economic troubles in the rich West, Cold War payouts to “our bastards” for taking an anti-communist stance, UN mismanagement of mega-aid projects delivered to kleptocracies like Mobuto’s Zaire, Abacha’s Nigeria or, well, fill in your favorite despot here ______.

That brings us to the Millennium Development Goals.

With the Cold War over and fin-de-siècle economic growth extending into the newly coined “emerging markets,” it was decided to take steps to prevent the world’s poorest countries from missing the tide.

The world has made enormous strides toward achieving the eight goals — spelled out here — but it’s clear now it will fall short in some way on nearly all of them.

Many leaders are already pushing for a post-2015 development agenda.

Perhaps this was inevitable with such soaring objectives conceived at a time of relative peace and prosperity — in a pre-9/11, pre-Lehman-Brothers-collapse world.

Yet, at least part of the blame must go to the rich — and not the 1 percent, but rather the citizens of the world’s 20 richest countries, conveniently gathered in a group called the Organization of Economic Cooperation and Development (OECD).

When they signed up for the millennium goals, the OECD pledge to raise the percentage of their national GDPs devoted to international aid from the paltry 0.2 percent of 2000 to at least 0.7 percent.

How have they done? As the charts below show, pretty poorly.

While the aid amount from these 20 nations increased, the share of GDP devoted to the cause has remained at between 0.2 and 0.3 percent.

The US has provided no leadership here, bringing up the rear, in fact.

For those who would blame the Republicans for this, the next section will be disappointing. Because, Iraq and Afghanistan wars notwithstanding, the amount of money directed at the world’s poorest nations since Obama came into office has barely budged. In fact, US development aid dropped in 2010, 2011 and 2012.

But the US continues to spend slightly more (in nominal terms, slightly less in terms of percent of GDP) on its troublesome foreign aid favorites. Israel, Afghanistan, Pakistan, Iraq, and Egypt received $11.3 billion among them in 2013, for instance.

The Millennium Challenge Corporation, the US government’s main agency to channel funds into the countries targeted by the millennium goals, received less than $900 million the same year. Another few hundred million is doled out in direct food or development aid to impoverished countries like Haiti, Burundi or Laos by other State Department sources, but the balance of American aid goes to war zones and hot spots in the Middle East.

So let’s return to the question at hand: Will Obama’s 2015 budget seek to change this?

Not likely. Polls indicate public support for foreign aid near a historic low. Indeed, one recent poll by the Kaiser Family Foundation found that a majority of Americans believe the US spends 28 percent of its annual budget on foreign aid.

The truth (mathematical — you can look it up!) is that US foreign aid spending represents less than 1 percent of US government spending. And that’s not going to change this year no matter how noble the Millennium Challenge Goals might seem.

More GlobalPost analysis: Should the US send more aid to Afghanistan?