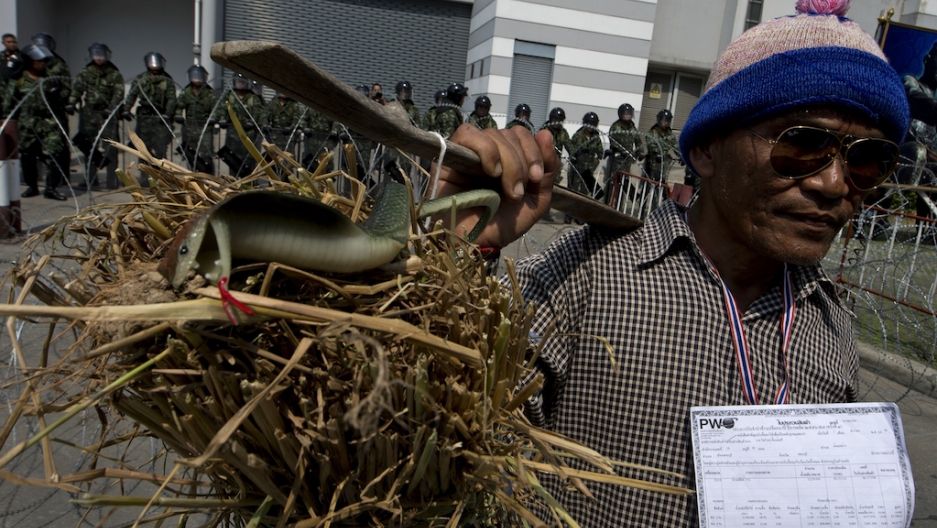 A Thai farmer carries bales of rice as he protests against the government's delayed rice subsidy payments. The scandal could bring down the Thai prime minister.
Credit: Pornchai Kittiwongsakul
Share

BANGKOK, Thailand — Like baguettes in France or barbecue in Memphis, rice in Thailand transcends mere grub.

To Thais, the cherished white grain is nourishment defined. The masses who conjure it from the earth occupy a low but noble place in society. They also happen to make up a significant portion of the country’s voters.

This explains why, for the past three years, Prime Minister Yingluck Shinawatra’s government has vowed to buy every grain of Thai rice at a whopping premium — up to 50 percent the market rate.

More than just savvy populist politics, the idea was pitched to the nation as a neat win-win. Not only would down-and-out rice farmers earn more, but the government would corner the rice market and drive up the global price. The promise amounted to a hedge fund-style high-stakes bet with borrowed cash.

This wild ambition is now imploding.

The policy has deposed Thailand as the world’s No. 1 rice exporter — long a point of national pride. It even threatens to take down the prime minister, whose indebted government is struggling to pay farmers.

On Tuesday, Thailand abruptly announced that the subsidy scheme would end this month, because the caretaker government has no authority to extend it. The government, however, has refused to rule out reviving the program in the future.

“It’s unwise to anger people of the fields,” said Phanom Jaichum, a 63-year-old rice farmer from Kanchanaburi, a Thai province on Myanmar’s border. “There are a lot of us. Enough to determine who gets elected and who doesn’t. They shouldn’t make us upset.”

Though most Thai politicians wouldn’t last a week in the paddy, they aggressively court rice farmers. Photo-ops with field-wizened grannies look great on campaign signs. As in America, subsidy policies doling out money to farmers secure loyalty in the voting booth, pump cash into the heartland and project an air of benevolence.

The government initially hoped buying and hoarding all that rice would shrink the planet’s reserves and send the global rice price soaring. According to the plan, once the price spiked, the state would sell off its rice stockpile to a desperate world market and cover its exorbitant payouts to farmers.

But the price never spiked.

In recent years, India and Vietnam have boosted rice exports and managed to keep the world’s appetite satiated. Thailand’s state silos are now filled with unsold rice. Some of it is spoiling. In the first year alone, the program racked up at least $4 billion in losses — an amount greater than the GDP of Fiji — contributing to ballooning budget deficits.

With the loan-financed rice gamble gone bad, the Thai government lacks cash on hand to pay off all of the farmers. Only a thousand or so farmers have arrived in Bangkok to demand payment from the government. According to Reuters, roughly 1 million farmers are unpaid, though it remains to be seen whether they will turn against the government en masse.

“I didn’t come to destroy the government. I didn’t come looking for a fight,” said Biak Ramonpol, a 54-year-old rice farmer from Kanchanaburi camping out in Bangkok with fellow farmers in the Ministry of Commerce’s parking deck. “I just want my money.”

“Thai rice is the world’s best,” Biak said. “Everyone knows that. But this scheme has attracted scammers and now the quality is sinking. It’s heartbreaking.”

The scheme is also a gift to enterprising smugglers. Reports of illegally imported sacks filled with lesser-quality rice from impoverished Myanmar or Cambodia are increasingly common among traders. Passed off as Thai-grown, these substandard grains fetch jacked-up rates — all while diluting Thailand’s reputation for producing some of the world’s tastiest rice.

“This is one of the worst policies ever conducted by a Thai government. Of all time,” said Ammar Siamwalla, a senior economist with the Thailand Development Research Institute, an independent think tank.

The scheme, he said, is difficult to audit by design and appears rife with corruption. “The whole thing is chaotic. But it’s beyond just corruption,” Ammar said. “It’s completely destroying the rice industry.”

“Farmers are now talking about raiding government warehouses and taking their rice back,” Ammar said. “All kinds of solutions are in the air. All of which are wild ... We are teetering on becoming an anarchic society.”

As if backlash from angry, unpaid farmers wasn’t enough, Thailand’s government is also operating with one hand tied behind its back.

Thailand’s rice scheme disaster is bad news to all but one group — a self-proclaimed “people’s coup” movement that delights in seeing the government flounder.

For three months, this protest movement has invaded ministries, threatened to abduct the prime minister and blockaded key parts of Bangkok. Some government branches have resorted to operating out of suburban malls.

The uprising — formally called the People’s Democratic Reform Committee — is hardly democratic. It has a radical prescription for Thailand’s problems: canceling all elections until a handpicked council of virtuous statesmen can rid the nation of corruption. The movement has derided populist policies such as the rice scheme as a form of “indirect vote buying.”

To appease its detractors and reassert its popularity, Pheu Thai dissolved itself into a “caretaker government” in December and held new elections in early February.

Aware that it couldn’t achieve its utopian vision at the polls, the uprising sabotaged the election in Bangkok by mobbing polling stations and forcibly thwarting would-be voters. More than 10 percent of polls were canceled. Scheduling make-up elections will take weeks or longer.

The result: Thailand’s government is still stuck in “caretaker” status and legally forbidden from borrowing more money to pay off aggrieved farmers. “Their borrowing limit has been reached,” Ammar said. “All the banks, even government-owned banks, don’t want to fork over money to bail them out.”

Worse yet for the government, Thailand’s National Anti-Corruption Commission is investigating the rice scheme’s alleged corruption and could lodge criminal charges against the prime minister, Yingluck Shinawatra, and key party members.

Hoping for just that outcome, the Bangkok-based “people’s coup” movement has latched onto the plight of upcountry farmers. Having failed to stop an election — nearly half of the Thai electorate turned out — the farmers are spotlighted as victims of the government they despise.

“We’re disorganized,” said Phanom, the rice farmer. “We don’t have the skills to pressure a government. People are getting desperate and spending up our meager savings or going to loan sharks ... so we’ll take whatever help we can get.”

The rice scheme’s failure is particularly damaging given that Pheu Thai presents itself as a champion of the poor.

For more than a decade, a powerful political network behind Pheu Thai has become the dominant force in Thai politics. Their winning formula relies on shifting state resources from the seat of power, Bangkok, to the neglected and fast-modernizing rice-farming heartland.

Despite engineering Thailand’s “historic worst policy,” Ammar credited a previous incarnation of the party with the country’s “historic best policy”: a $1-per-visit health care plan enacted in the early 2000s.

Even if the rice scheme debacle is successfully used to unseat the premier and her circle, pro-poor policies are here to stay in Thailand, according to Michael Montesano, a visiting research fellow with Singapore’s Institute for Southeast Asian Studies.

“This policy has proved poorly designed and almost certainly unsustainable,” Montesano wrote in a February research paper. But “labeling these policies a form of indirect vote buying — as supporters of the continuing protests against the Yingluck government have done — will be and should be a fast track to political irrelevance.”