European and American missionaries have gone to Africa for centuries to spread the word of Christ. That trend is now working in reverse.

Drive an hour northeast of Dallas, and you’ll find yourself staring off into a barren, flat horizon. One out-of-place building rises above the landscape: a 10,000-seat auditorium.

It’s the centrepiece for the Redeemed Christian Church of God in North America, a Pentecostal movement that started in Nigeria in 1952. It’s one of Africa’s largest and most influential Christian movements, claiming more than 5 million followers worldwide, mostly in Nigeria.

Pastor James Fadele, who runs the Church in North America, said God told the Church’s leader, Enoch Adeboye, that their North American headquarters would be near Dallas.

He said a Caucasian man in Texas had a vision.

“God told him, the land doesn’t belong to you, it belongs to a group of church people. When you meet them, I will let you know who they are,” Fadele said.

Fadele — a short man with a booming voice — said a few Redeemed Church members were eating at a local restaurant when they were approached by the Caucasian man.

“He went to them, ‘I don’t know who you guys are. A year ago, God asked me to buy this 103 acres of land. I’ve bought it, but God says you are the owner.’ They accepted it, they paid the check and the rest, as they say, is history,” Fadele said, with a laugh.

That divine spot is Floyd, Texas, an unincorporated community with a population of 220. The Church’s property now spans 700 acres in Floyd. Church leaders have grand plans for the land: a university, sports complex, even a golf course. The 10,000-seat arena was actually built to expand to fit 100,000.

Fadele radiates with excitement, describing his vision for future events at the auditorium: “Crazy people for Jesus, people who are in love with Jesus, shouting hallelujah, praising Jesus, having prayer vigils, having fun, giving each other high fives."

Fadele’s goal is to establish a church within every 10 miles in North America, to take as many people as possible to heaven.

“Because heaven is real, God is real. And that is why we want to plant churches like Starbucks,” he said.

At a Sunday morning service at a parish in Melrose, Massachusetts, a city just north of Boston, about 120 people were gathered. That’s larger than average for a Redeemed Church congregation. Once parishes start to gain much size, they quickly split to create more branches. That’s part of the strategy for quick growth. 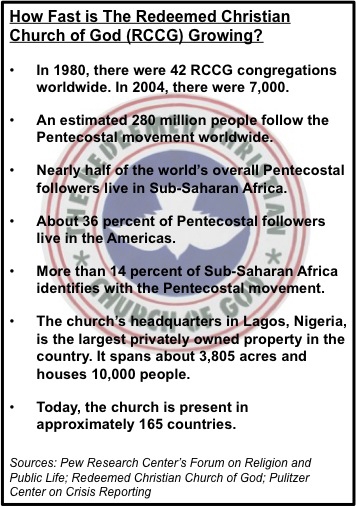 Church leaders say there are already 720 churches in North America, nearly double from four years ago. They have perhaps 15,000 members in the US, a figure that’s all but impossible to verify.

Ruth Marshall with the University of Toronto, who studies Christian movements in Africa and has studied the Redeemed Church, said the Church’s aggressive plans stem from its leader and guiding force, Enoch Adeboye in Nigeria.

“He [Adeboye] really wants to be an important global player,” said Marshall. “One could say that he’s almost obsessed with this logic of church planting because for him it’s an index of success. And also, prosaically, because the more parishes there are, the wealthier the central organization becomes because each pastor has to reverse 20 percent of growth revenues – tithes, offerings, and fundraising – to the headquarters in Nigeria.”

The US — where Pentecostalism began — holds special appeal to Church leaders who believe in a manifest Christian destiny from Africa.

Marshall described an image that Nigerian Christian pastors often use: “If you turn Africa on its side with the bulge facing down, you’ll see that Africa is the gun and Nigeria is the trigger.”

In the analogy, Christian evangelicals have pulled the trigger and shot the bullet of global revival. The struggle pits the powers of Jesus against Satan.

At the church service in Massachusetts, their passion for their mission was clear. People were dancing in the aisles, hugging, and breaking into conga lines. The speakers were cranked way up. People sang with arms outstretched and eyes tightly shut. The place was rocking.

These are Pentecostal Christians who believe strongly in faith healing and miracles and speak in tongues to connect with the Holy Spirit. There were young and old in attendance. Children were downstairs at their own service and toddlers were running around the lobby.

Nearly all Redeemed Church members in Melrose, as well as at most North American locations, are Nigerian or African immigrants. For the church to grow, they’ll need a lot more non-Africans. That’s proven challenging.

“I think they’re faced with this problem within their own population in fact,” said Ruth Marshall. She said the children of African immigrant churchgoers aren’t as interested in attending a Redeemed Church.

“Their children may be leaving the church because they want a church that is more relevant to the lives of the average American teenager or young person,” she said.

Back in Floyd, Pastor James Fadele is not discouraged. He says it’ll take some time, but they will connect with the greater community. One way to do that, in Texas at least, is through that huge auditorium — Fadele said it’s available to rent, for weddings, rodeos, whatever. He said when people learn they're genuine, they’ll join his church.

“It’s just as if you have a $100 bill that is fake and a $100 bill that is real. How do you know which one is real and which one is fake?” Fadele asked. “I’m not saying all the churches in America are fake. But we... have come all the way from Africa. We are engaging the people to show them the true gospel, making sure that people are being saved and people are making it to heaven.”