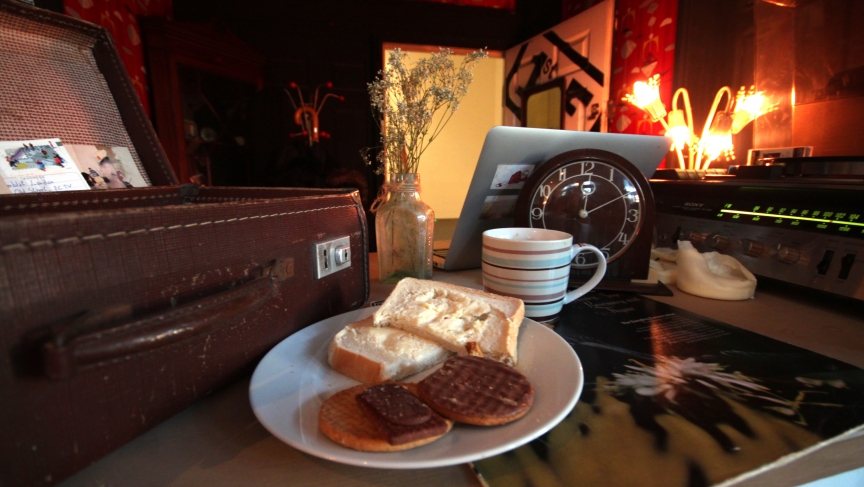 Here's what you might see at the Ziferblat Cafe in London's East End.

How does a free coffee sound?  Cookies, too.  It’s all free. Instead, you pay for the time you spend drinking, eating and hanging at the  café.

That’s the new business model proposed by  Ziferblat, a small Russian chain of coffee shops that’s just opened a location in London. Instead of paying for what you eat, you pay for how long you sit — three pence per minute, or about $3 per hour.

Ziferblat, Russian for "clockface," might be the first shop of its kind in the UK, but it’s well established in Russia. Its founder is Ivan  Mitin, a mustachioed man from Moscow with a tendency to philosophize.

"Ziferblat  is a space where you can come and feel at home in a big city," he explained. "It’s something like a treehouse for  grownups,  or living room in the center of a city where anyone is really open to each other. When they don’t wear the masks that society forces us to wear in a big city."

Thought  provoking, yes.  But,  essentially, it's a coffeehouse. It started in Moscow as a venue for poetry readings, art shows and the like, relying solely on donations to pay rent. As it grew in popularity  — and  the  rent increased  —  Mitin  had to  impose a minimum donation, which equalled about a rouble a minute. So Ziferblat became known as a pay-per-minute  café.

"You can use the space as you like. Sit and work here with your computer, you can draw pictures, you can read a book, you can invite your friends or you can meet someone new and have a chat with them, and everything is for free here, except for the time people spent," he said. "And time costs three pence a minute."

London is notoriously expensive, so when word got out that a cafe was giving away free tea and biscuits, cynics were quick to consider exploiting it: why spend $4 at Starbucks when you could get as much as you like for pennies at  Ziferblat?

"The key difference between  Ziferblat  and your standard coffee chains is that they are not treating you just like someone they want to get money out of," said Alexi  Duggins,  editor of Time Out London.  And if he likes a place, there’s a good chance that place will do well.  At least for a while.

"It’s really significant that they  don’t call you  customers;  they call you micro-tenants, because they want people to be there and to share the space in a way they feel comfortable with, " he said.

So far,  micro-tenants  are  plentiful. Students without their own living rooms, telecommuters, people who don’t like the dark appeal of local pubs, shoppers in need of a relaxing space, they’re all here.

" It’s quite nice to come here to just sit and chat and not invade other people’s space," said one micro-tenant. "You don’t feel the pressure to leave,  unlike other  cafes  where they’re like ‘here’s the bill, leave now.’ So I like it. "

Another agreed. "I think this is a lovely idea. It feels as though this is what pubs were meant to be: a social place, something where you can get on with something, you can interact with people, you can have a drink and a toast and a relax," the tenant said. "We need it so badly. I think every corner should have something like this."

But look, if he's giving everything away for free, how is he making any money?  Mitin's vague about that — but confident his formula works.

"The price of teabags or beans is not that high and by giving it for free, it's not like we're giving gold here," he said. "It’s not that big a problem."

A quick look at what the café offers confirms that. Cut-rate tea bags, supermarket brand cookies, coffee beans bought in bulk. Simple things. And it’s mostly self-serve. If you want a luxurious caramel macchiato, you’ve got to make it yourself.

"People who come here already know why they come here and they admire this idea, and they don’t try to use it," Mitin said. "Let me drink 10  cappuccinos  in 10 minutes and die here."

And with around ten branches of his own in Russia, and numerous copycats opening up nearby, Mitin is sure the rest of the world is open to the idea.

"London is really expensive and that is one of the challenges why we choose this city, because if it will work here, it will work everywhere," he said.