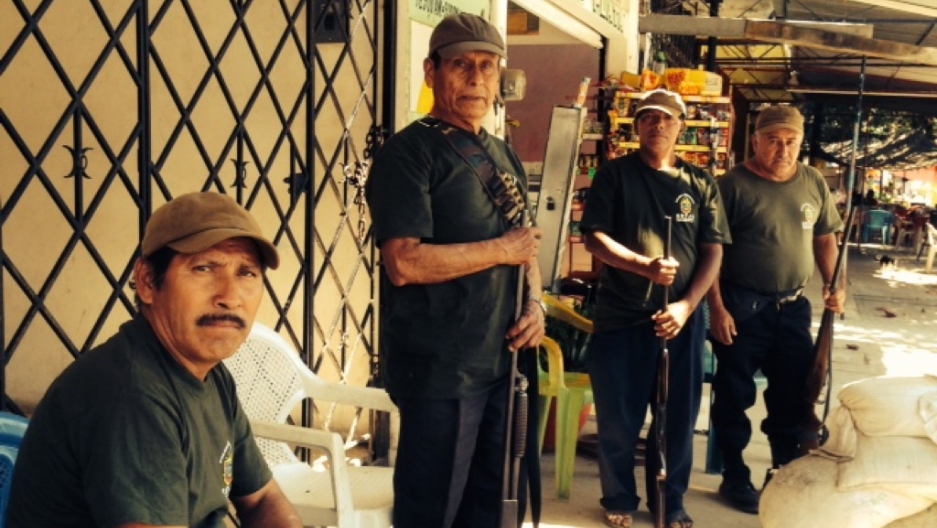 TIERRA COLORADA, Mexico — Major events these days in Mexico's seven-year-long criminal conflict have precious little to do with a war on drugs.

In the past year, the capture of town after town by volunteer police and citizen militias in the Pacific coast states of Michoacan and Guerrero has roiled and embarrassed President Enrique Pena Nieto's government.

Officials have dispatched thousands of troops and militarized police to contain the “self-defense” groups, which claim they're filling a vacuum left by incompetent or corrupt officials.

But many of the civilians taking on the gangs that control the region say they care little about illicit narcotics, which have been supplying US and Mexican consumers for decades. They just want the criminals to leave ordinary residents in peace.

“We aren't against drug traffickers,” he says. “We are against organized crime.”

That view mocks former President Felipe Calderon. He often justified the military offensive he launched against entrenched criminal gangs in December 2006 — that the media later branded the “Mexican drug war” — as intended to keep drugs away from Mexican youth. But it dovetails with the aims of his successor, Pena Nieto, who says he wants to eradicate crimes most affecting common citizens.

Those crimes include the extortion, kidnapping and protection rackets that have flourished in recent years.

“It’s understandable. Their priority is the security of their families,” says Mexican analyst Alejandro Hope, who served in the intelligence service under Calderon. “They have lived with drug trafficking for a long time.”

Many anti-gang activists say they have little problem with poor farmers growing marijuana and poppies or the young men and women who work for the traffickers as either smugglers or guns for hire. Few express concern about crime lords' use of narcotics proceeds to corrupt officials at every level.

“I don't blame them for deciding to do that,” says Pioquinto Damian, 61, leader of a merchants association in Chilpancingo, Guerrero's state capital. He barely escaped assassination Jan. 28 immediately after publicly accusing the city's mayor of abetting local gangsters.

Multi-sided fighting — among rival gangs and between them and government forces — has killed more than 80,000 people and left some 26,000 missing since late 2006. Both the violence and the flow of drugs continues unabated in many places, despite Calderon's and Pena Nieto's efforts.

Frustrated citizens long have imposed their own justice when the official process fails. Lynchings of accused thieves, rapists and murderers occur still far too regularly in rural community and urban neighborhoods alike.

More from GlobalPost: Lynching is still common across Latin America

But a vigilante crisis erupted 13 months ago, when militias in largely indigenous communities near Acapulco arrested scores of men and women they accused of various crimes. Volunteer police soon formed in dozens of other towns, disarming municipal officers and in some cases forcing mayors to flee.

The Guerrero groups inspired the birth of others in Michoacan last February to battle the politically protected, socially parasitic and meth-proficient Knights Templar gang.

Taking their name from medieval crusading monks, the Knights Templar started out three years ago sounding much like the militia members do now. They also claimed to be defending communities against outsiders, which won them a large following in the territory where they operated. Then, their critics say, they fell into extortion, kidnapping and protection rackets.

"I know these people. Their cause is just," Gregorio Lopez, a Roman Catholic priest in Apatzingan, a Templar bastion, says of the militias. “The Templars just got greedy and started bothering people.”

As in Michoacan, vigilantes continue seizing farm communities across Guerrero's highlands. In recent days they've occupied villages within a few miles of Chilpancingo, spurring Pena Nieto to dispatch additional federal police and troops to bolster the several thousand already in the capital.

Forty-six municipalities in Guerrero state have community police. (This map appears in a report by the National Human Rights Commission of Mexico)

Leaders of the vigilantes — here they are “community police,” legalized 17 years ago by state law — say they'll be in the capital's center soon enough.

“If they would take on the bad guys there would be no need for another town to rise up,” Ernesto Gallardo, 28, claiming to command several thousand volunteer policemen throughout these mountains, says of officials. “It's about assuming their responsibility.”

Both armed rebellions and the narcotics trade have been Guerrero mainstays for many years.

Rebels have fought Spanish viceroys, Mexican dictators and elected presidents alike. Opium poppy and marijuana fields flourish in these mountains. South American cocaine long has flowed through the port of Acapulco and the many inlets along the state's coastline.

More from GlobalPost: California kids enlist in Mexico's militias to rout a cartel

Drug-trafficking families were well known and widely accepted in Chilpancingo and other Guerrero cities. “There wasn't any problem, people got along,” Damian, the merchants' leader, says.

But in the past five years a local gang, Los Rojos, has been extorting and kidnapping people in Chilpancingo and outlying areas, Damian says. Officials have done little or nothing to stop them.

When he accused Mayor Mario Moreno last month of being a “narco,” Damian was spurred by the gangsters' preying upon members of his merchants association, including the recent kidnapping of five butchers from Chilpancingo's public market.

An hour after his accusation, Damian's car was attacked by several carloads of gunmen on the outskirts of Chilpancingo. He escaped unharmed, though his car was riddled with more than 100 bullets. The merchant’s daughter-in-law riding in the front passenger seat that Damian usually occupies was killed, and his son was slightly wounded.

“What we are seeking is for the drug traffickers to not mess with the population,” Damian says from a fourth-floor apartment on Chilpancingo's central plaza, where he and his family have been holed up since the incident, guarded by more than dozen state police officers.

“What we want is harmony,” he says, “social peace.”