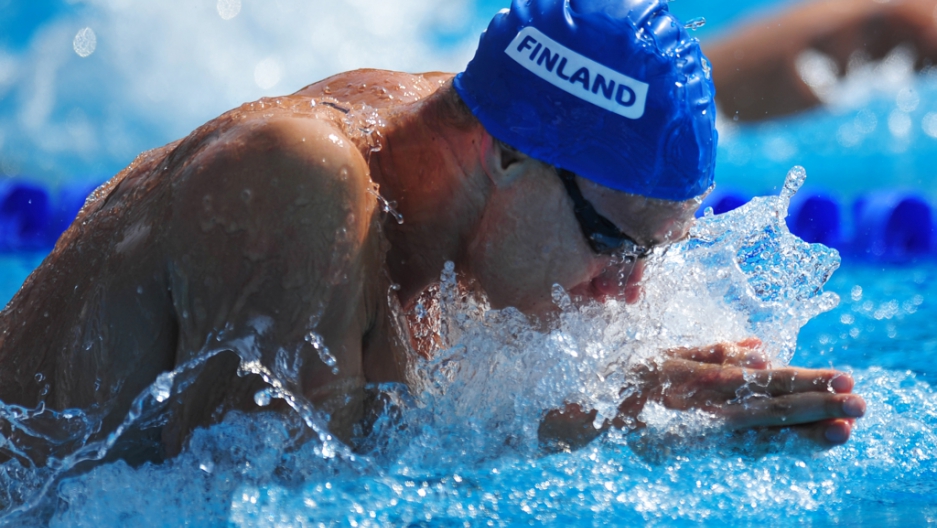 On Sunday the world gained another openly gay Olympic athlete: Ari-Pekka Liukkonen of Finland. His announcement comes just days before the 2014 Winter Olympic Games start in Sochi, Russia, where an anti-gay law has been in effect since last year. The Finnish swimmer said, “I wanted to start a broader discussion in connection with Sochi, because it’s sad that the legislation in Russia restricts the human rights of young people and others.”

This issue is both public and personal for the six openly gay Olympians who will be competing at Sochi. They'll join 6,000 athletes from 85 countries — some of whom will be wearing space suits, dazzlingly geometric pants or mariachi costumes.

Gay rights have taken center stage at Sochi, thanks to Russia's own targeting of the LGBT community. In June 2013, the Russian government banned dissemination of pro-gay "propaganda" that could be accessible to children. The law’s vagueness, activists note, could prohibit almost any pro-gay expression, such as public statements, rallies, rainbow flags, rainbow nesting dolls, or same-sex hand-holding. Violators can be fined or jailed up to 14 days. Foreigners can be expelled.

Then in July 2013, Russia made it illegal for foreign gay and lesbian couples to adopt Russian children, and in October 2013, the government proposed legislation that would remove Russian children from their LGBT parents. The proposal is now withdrawn.

Over the last seven months, Russia has introduced or amended at least 13 laws restricting freedom of expression, association and assembly of non-governmental organizations, particularly those that receive foreign funding — a violation of international human rights law, says Amnesty International.

The cumulative effect of Russia’s crackdown on human rights, including on those of the LGBT community, has been ugly. Russian activists note that the measures strengthen homophobia in a country where 74 percent of people already believe that homosexuality is unacceptable.

The new laws, says Human Rights Watch, have also fueled vicious attacks against LGBT individuals, including beatings, kidnappings, torture and murder. GLAAD has compiled many horrifying examples since the 2013 legislation went into effect, which you can read about here. Or watch this documentary, "Hunted," by investigative journalist Liz Mckean.

But here’s the rainbow lining: Sochi has also provided a highly visible forum for international protest and pressure in response to Russia’s anti-gay laws. For example, some 50 Olympic athletes — plus 406,000 other people around the globe — have petitioned the Russian government to "eliminate all anti-gay laws and protect all citizens from violence and discrimination in Russia."

While International Olympics Committee member Dick Pound (no, really) has downplayed the harshness of the country's “antigay stuff,” European Union Commissioner Viviane Reding confirmed that she'll boycott the Games because of Russia's treatment of minorities. German President Joachim Gauck and French President Francois Hollande have denied a boycott but they won't be attending either. Nor will US President Barack Obama. Instead, he'll be sending the largest and most openly gay delegation in Olympics history.

In response to the international outcry, Russian President Vladimir Putin awkwardly backpedaled into a pedophilia comparison. The leader — known for riding shirtless on a horse — assured the world on Jan. 17 that LGBT people attending the Olympics could “feel safe” so long as they “leave kids alone.” Sochi’s mayor then claimed there are no gay people in Sochi, leading to some entertaining fact-checking by the BBC.

The Olympics are a time to celebrate world-class feats of athleticism, flamboyant displays of nationalism and maybe some spandex-clad buns. But they’re also a time to honor human courage. Even if the mayor of Sochi does not believe in gay people, they'll be at the Winter Games.

Here are the five other openly gay athletes who will be competing at Sochi.

Bucsis came out publicly at Calgary’s Gay Pride Parade in September 2013, two years after telling her family and friends. The 24-year-old speed skater is on Canada’s national team and competed in the 500-meter speed skating event at the 2010 Vancouver Games. She told the Globe and Mail she was “so proud to be gay” and wanted to speak out against Russia’s anti-gay laws: “I could never promote that message of concealing who you are with all of this going on in Russia. I’m kind of happy that I did it on my own terms. ... I also have faith in Russia. I think, I hope, that things will get better.”

Brockhoff was the first LGBT Olympian to come out in protest of Russia’s legislation, during an interview with Australia’s ABC TV on Aug. 22, 2013. The 20-year-old snowboarder and Olympic newbie said she wanted to show Putin how successful gay and lesbian athletes could be. In January Brockhoff seriously upped her game: “After I compete, I'm willing to rip on [Putin's] ass. I'm not happy and there's a bunch of other Olympians who are not happy either.” She promised to send him a six-finger salute on camera — representing Principle Six, the Olympic Charter’s anti-discrimination principle.

The 26-year-old skater has been out since at least 2009, when Dutch speed skater Ireen Wüst revealed the two were dating. Van Kerkhof competed in the 2010 Vancouver Games. But as blogger Pat Griffin points out, not all openly gay athletes are interested in public LGBT advocacy. Last November, van Kerkhof said: "It is sad to hear about somebody beaten up because he is gay. It's terrible... but we, professional athletes, did go to China as well. There are also people who live in inhumane conditions in slums and we are housed in a 5-star hotel. We can't do anything about it."

Maas is married to Norwegian former snowboarder Stine Brun Kjeldaas, with whom she has a daughter. The 29-year-old snowboarder competed in the half-pipe at the 2006 Torino Games. Her wife, a fellow Olympian, competed in the 2002 Salt Lake City Games and won silver in the half-pipe at the 1998 Nagano Games. In October, Maas said: "In my opinion, the IOC should choose a location more deliberately. They should exclude countries where certain minorities are excluded, such as in Russia. With the choice of Russia, the IOC is taking a step back in time. Russia lives in the past, while we should look forward."

And here are five more international athletes who've come out in the past two months alone, some of whom are Olympic hopefuls for the 2016 Summer Games in Rio de Janeiro:

Liukkonen came out in an interview with Finnish newspaper YLE on Feb. 2, 2014. The 24-year-old swimmer competed in the 2012 London Games and won a bronze medal in the 4x50m mixed freestyle relay at the 2012 European Championships. Luikkonen is the first Finnish athlete to come out publicly while still active in his sport. He said, “I hope that in Finland we can get to the stage where we don’t need to talk about this anymore as soon as possible.... It’s a really great feeling that I can finally be myself.”

On Jan. 8, 2014, Hitzlsperger assembled a group of reporters from German weekly Die Zeit and told them he is gay in a lengthy interview. “I think this is a good moment for it. The Olympic Games in Sochi are coming up and I think we need critical voices against the campaigns of several governments against homosexuals.” The 31-year-old midfielder played for Germany in the 2006 FIFA World Cup and the 2008 UEFA European Championships. Hitzlsperger noted, “Modern soccer is no place for people stuck in yesterday, or people with crusty old prejudices. This all serves to encourage young people about to enter the world of professional sports.” Watch the full interview here.

Matos came out to Brazilian newspaper Correio on Jan. 6, 2014, partly inspired by the YouTube video of British diver Tom Daley (see below). The 24-year-old diver said: “When I saw it, I joked with a friend. I said I was going to do it as well. He advised me to [stay closeted] until after the [2016 Rio Games] so I wouldn’t lose sponsorship” — a common concern among Brazilian athletes. But Matos says he is tired of avoiding gay parties, hiding boyfriends and pretending to be straight. The diver, who was born in Pennsylvania, was Brazil’s 3-meter champion in 2013.

No, Brian Boitano is not falling. He's testing the fourth spatial dimension at the 1988 Calgary Winter Games. (Jerome Delay/Getty Images)

Boitano came out publicly on Dec. 19, 2013, a day after Obama appointed him to the US delegation to Sochi. He later told The New York Times: “We were going on the president’s behalf and we were standing up for that message that I completely believed in. [I told myself,] ‘I can’t go to Sochi and not make this official. I need to get past my comfort zone of being a private guy like I’ve been my whole life.” The 50-year-old figure skating legend, who won gold at the 1988 Winter Olympics, joins two other openly gay athletes on the delegation — tennis champion Billie Jean King (39 Grand Slam titles) and Olympic ice hockey player Caitlin Cahow (bronze medal in the 2006 Torino Games).

Nineteen-year-old Daley opened up about his personal life via YouTube on Dec. 2, 2013: “Come spring this year, my life changed massively when I met someone and it made me feel so happy, so safe and everything just feels great. And that someone is a guy.” Specifically, that guy is "Milk" screenwriter Dustin Lance Black. Daley said he still “fancies” girls but wanted to put an end to speculation about his relationship status. He then tweeted the video to his more than 2.4 million Twitter followers. The teen concluded: “I still want to win an Olympic medal in Rio 2016 for Great Britain. I'm still as motivated as ever to do that and it would be great to have you guys on that journey as well.” Daley competed in the 2008 Beijing Games (when he was 14!) and won a bronze medal in the 10-meter platform at the 2012 London Games. Watch the teen's coming-out video here.