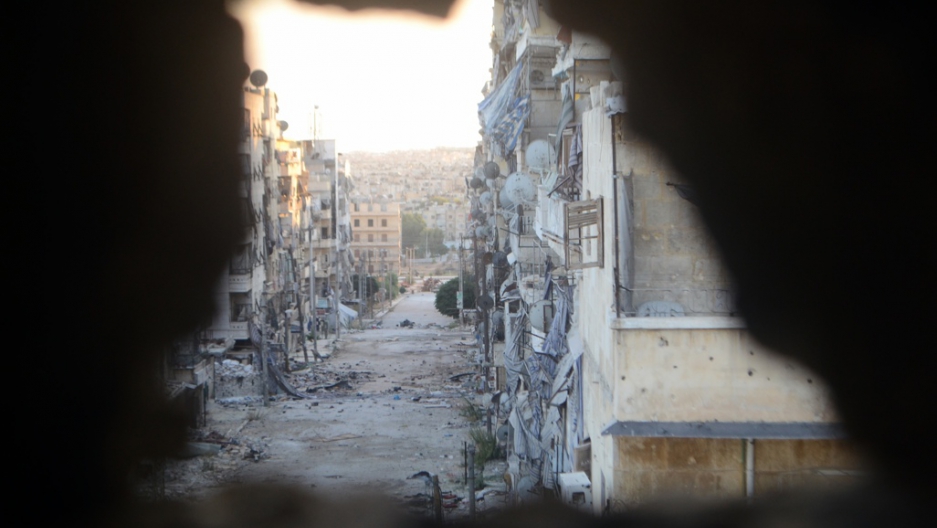 BUZZARDS BAY, Mass. — Ted Postol is mad, and he doesn’t care who knows it.

The Massachusetts Institute of Technology physicist is convinced that the White House pushed the country to the brink of military action in Syria on the basis of faulty intelligence, similar to the way President George W. Bush called for the invasion of Iraq in 2003.

“We were within a whisker of war based on egregious errors,” he said in a phone interview. “I think this is one of the most serious issues of our day.”

Postol and weapons expert Richard Lloyd are the authors of a recent study that attempts to prove the rockets that unleashed deadly sarin nerve gas on civilians in a Damascus suburb on Aug. 21 had a range of about 2 kilometers (0.6 miles).

This, they maintain, negates key portions of the argument by President Barack Obama's administration that only the regime of Syrian President Bashar al-Assad could have carried out the chemical attacks.

“We are not saying that the Syrian government did not do it,” Postol said. “But the intelligence cited by the administration was wrong. It was a fortunate escape from a catastrophic error.”

It’s been more than five months since the horrific attack that nearly drew Western powers into battle in Syria.

In August 2012, Obama indicated that a major use of chemical weapons would cross a “red line” and invite “enormous consequences.”

A year later, a dozen rockets carrying a nerve agent believed to be sarin struck in several areas around Damascus. The images of children gasping for air, the tiny white-shrouded bodies stacked for burial and the sheer scale of the carnage stirred the United States into battle mode.

The Obama administration quickly blamed the attack on the Assad regime and called for an immediate military response.

A major argument US officials used to bolster their assessment was the rockets’ point of origin.

“We know where the rockets were launched from,” Secretary of State John Kerry said in a statement to the media on Aug. 30. “We know rockets came only from regime-controlled areas and went only to opposition-controlled or contested neighborhoods.”

Four days later, in front of the Senate Foreign Relations Committee, he reiterated his claim.

“We are certain that none of the opposition has the weapons or capacity to effect a strike of this scale, particularly from the heart of regime territory,” Kerry said.

But the “heart” was a minimum of 6 kilometers (3.7 miles) from the impact site. This is impossible, Postol and Lloyd say, adding that the Obama administration could not have been as sure as it claimed.

More from GlobalPost: The Syrian government is razing entire neighborhoods — and that's not the half of it

Postol and Lloyd are not alone in thinking that the White House was a bit hasty in its assessment.

In December, veteran journalist Seymour Hersh published a detailed report in the London Review of Books accusing the Obama administration of massaging the chemical attacks data to make a stronger case for Assad’s culpability.

According to Hersh, the president did not tell the whole story as he marched the nation toward war.

“In some instances, he omitted important intelligence, and in others he presented assumptions as facts,” Hersh wrote.

Citing unnamed US intelligence sources, Hersh said the US government knew that one of the rebel groups, an Al Qaeda affiliate called Al Nusra, had the ability to manufacture sarin in quantity.

“When the attack occurred Al Nusra should have been a suspect, but the administration cherry-picked intelligence to justify a strike against Assad,” Hersh wrote.

This was enough to get Postol and Lloyd thinking.

“Sy Hersh is not a guy you ignore,” the MIT professor said.

But, to a large extent, the US media did. Hersh has said the London Review of Books published his article only after The Washington Post and The New Yorker turned it down.

“The narrative was 'Bashar did it,'” Hersh told Pacifica radio show “Democracy Now!”

“And it was bought by the mainstream press.”

Legacy media certainly were on board.

On Sept. 17, The New York Times published a front-page story pinpointing what it said was the launch site.

The reporter, C.J. Chivers, used data from an interim United Nations report that provided precise compass directions of flight for two rockets to make a vector analysis that led back to Mount Qasioun, where the government’s Fourth Army Division was entrenched.

The Times story said the data were “some of the strongest findings to date that suggest the government gassed its own people.”

But Mount Qasioun was more than 9 kilometers (5.5 miles) from the impact site, a range that Postol called “totally nuts.”

Postol and Lloyd began analyzing available data. Using photographs, videos and other data, they calculated the range based on the type of rocket motor — a common type of 122-millimeter rocket known as Grad — and the blunt-nosed shape of the warhead, which Postol describes as a “soup can.”

“We spent a lot of time on the aerodynamics, then we got a handle on the drag coefficient,” Postol said.

A UN arms expert collects samples in a Damascus suburb on Aug. 29, 2013, after a chemical weapons attack. (Ammar al-Arbini/AFP/Getty Images)

A UN report released in mid-December bears out the central argument of the MIT study. Chief UN investigator Ake Sellstrom told a news conference in The Hague on Dec. 13 that his best estimate of the range of the rockets was quite short.

“Two kilometers could be a fair guess,” he said.

This is not the first time Postol, a former scientific adviser to the US Navy, and Lloyd, a former UN weapons inspector, have used their expertise to analyze Syrian attacks.

In September, they published a study that gauged that the warheads used to deliver the chemicals could have contained a much larger payload — up to 50 liters — than had previously been thought possible.

It helped explain the large numbers of casualties: Estimates range from the French government’s 281 to the rebel Free Syria Army’s 1,729. US officials put the death toll at 1,429, including 426 children.

The September finding was hailed as a valuable contribution to understanding the Aug. 21 attacks.

But Postol and Loyd’s new study has been greeted much more skeptically. McClatchy published a story in January saying that the new study undercut US claims on the attack, but few others in the US press picked it up.

Kremlin-funded Russia Today, however, gave it prominence. Moscow is one of Assad’s major defenders, and has consistently maintained that the attacks were the work of rebel forces hoping to provoke Obama to attack Assad.

The Times’ senior writer Chivers in December reported on a preliminary version of the study. He acknowledged that the 2-kilometer range estimate challenged his own earlier assessment of the launch site location.

“This is not a ‘refinement,’” the scientist said. “It’s a complete change. But for the American press, all facts lead to the conclusion that Assad was responsible.”

Postol’s argument does not excuse the Assad regime; there are contested areas within a 2-kilometer range of the impact sites, where the government has bases.

But neither does it implicate the Assad regime exclusively, since the rebels also hold territory within range, according to the map the White House used to illustrate its Aug. 30 statement (seen below).

But any suggestion that rebels themselves may have been behind the attacks often raise hackles and doubts, rather than reasoned discussion.

This is typical of the Syria debate in general, said Mona Yacoubian, a Syria expert at the Stimson Center, a public policy institute in Washington, DC.

“People have become entrenched in their positions,” she said. “This is preventing many from asking questions to help us understand better what we don’t know.”

Yacoubian agrees with those who think the Assad government was behind the chemical attacks, since it’s consistent with what’s known about the regime and its tactics.

“How could it have been the opposition?” she asked. “It does not make sense that they would attack those who support them.”

Still, she added, nothing is certain, and the MIT study raises important questions that deserve to be answered.

The Obama administration is sticking to its guns, however.

The Office of the Director of National Intelligence did not immediately respond to GlobalPost’s request for comment, but it has answered the question before.

In an email in response to a query from McClatchy about the MIT study, the Office of the Director of National Intelligence said that its assertion of Syrian government responsibility remains unchanged.

“[Our] assessment made clear that the opposition had not used chemical weapons in Syria,” it said.

Postol has been a thorn in the government’s side since at least the early 1990s, when he debunked the Pentagon’s claims that the Patriot missile had proven enormously effective against Iraqi Scuds during the Gulf War.

In February 1991, President George H.W. Bush told employees at the Raytheon plant that made the missile systems, “The Patriot is proof positive that missile defense works.”

But Postol’s analysis found the Patriots had not destroyed even one Scud. In some cases, they caused additional damage by falling to earth and exploding.

"It is possible that if we had not attempted to defend against Scuds, the level of resulting damage would be no worse than actually occurred," Postol told a congressional subcommittee at the time.

“Postol got into big trouble with the Raytheon Corp. and the Pentagon for making this statement,” wrote Fred Kaplan, a columnist at Slate.

But eventually he was vindicated.

Postol is confident that he’ll be vindicated this time as well.

“I’ve been doing this for a very long time,” he said. “I am almost always shown to be right.”

Will Afghan women prove a match against the Taliban?