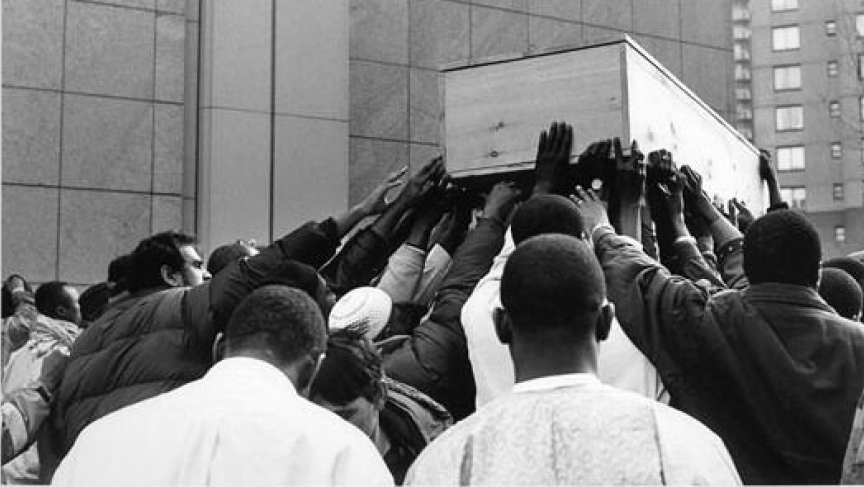 Dwayne R. Rodgers, an independent artist and curator in Brooklyn, took this photograph of Amadou Diallo's funeral procession in New York City in 1999. Rodgers was photographing a series on police brutality in the city.

Diallo was unarmed and hit with 19 bullets. Demonstrators poured into the streets and the story dominated headlines for weeks. But Diallo’s mother, Kadi Diallo, says for all of the media attention, something was lost in the coverage: a full picture of who her son really was.

Diallo was shot outside his Bronx apartment. The police officers had mistaken him for a serial rapist, who was later apprehended. But as his mother points out, Diallo had led a quiet, peaceful life in the 2.5 years in the United States.

“Amadou had no criminal record,” she says. “Not even a speeding ticket.”

But Kadi Diallo was also infuriated by how the media portrayed her son. Most stories referred to him as an African street vendor. And while Diallo did earn a living selling tapes, gloves and hats in lower Manhattan, his mother says that work was a mechanisim to pursue his real dream: to go to school and become a computer programmer.

“Suddenly he became the street peddler,” she says. “I don’t understand. The stereotype was there. It fell far short of depicting Amadou, the way he was."

Just before he died, Diallo had started taking steps toward become a professional.

After Diallo’s death, the four officers were charged with second-degree murder. In a controversial trial, they were all acquitted. His family sued the city and settled for $3 million. They used some of that money to create the Amadou Diallo Foundation and scholarship fund in 2005. Over five years, the foundation awarded about 50 scholarships. "Amadou was just one African student who found himself in New York City without any support," Diallo says. "But you have thousands of students who found themselves the same way."

One of the scholarship recipients is Zizi Sinare, a 32-year-old from Burkina Faso. I met him recently one afternoon and he was remarkably chipper, given that he works the overnight shift as a manager in a midtown Manhattan hotel. He heard about the Diallo shooting only after he received one of the foundation’s scholarships.

“Anytime I think about it, I feel really sad,” Sinare says. “You don’t know what might happen to you.”

Sinare sees similarities between himself and Diallo. “He came from Africa, like myself,” he says. “And he had a lot of dreams.” With the help of the scholarship, Sinare graduated first from Bronx Community College and later from Baruch College in Manhattan. That's just the beginning of his education. He also plans to pursue a master's of business administration.

Sinare is among a growing number of African immigrants who are bringing advanced degrees with them to the US. According to Michael Fix, chief executive officer of the Migration Policy Institute, African immigrants are “one of the most absolutely educated groups to come into the United States.” About 38 percent of Africans who come to the United States have a college degree or more, compared to 27 percent of native-born Americans.

At the same time, that education can be underutilized. Fix says African immigrants often hold jobs below their skill level. “Underemployment rates are very high through the first 10 years, but after that they diminish significantly.”

When Diallo was killed, he was in that period of underemployment. But his mother is convinced he would have worked himself to a better place. Had he lived, she says he would have had a family of his own and he would be working as a computer programmer. “That is what I imagine, because that was his passion,” his mother says.

Diallo took a break from her work with the foundation to help raise her triplet grandsons. But now she's getting involved again and eager to restart the scholarships — helping other African immigrants in New York City who, like her son, dreamed of a college education.