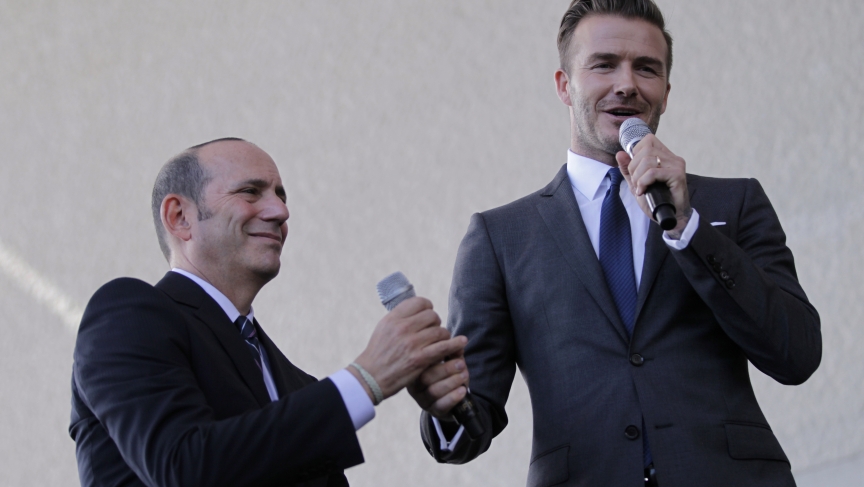 Don Garber, left, Major League Soccer commissioner, exchanges working microphones with David Beckham as Beckham discusses matters related to the ownership position he has with a proposed MLS expansion team that could play in Miami.

Beckham has agreed to form a professional soccer team in Miami. He's following through on an option included in his Galaxy contract that, according to The New York Times, gives him the right to buy an MLS franchise for the sub-market rate of $25 million.

The Miami team would be the 22nd franchise in the league, and the second to make a go of it in Miami. The Miami Fusion operated until 2001, when it was shut down by the league because of low attendance, poor facilities and an ownership that generally wasn't up to the task.

That shouldn't be a problem with this new venture. Beckham, who himself is worth an estimated $300 million, says he and his partners are not looking for public money to build a soccer-only stadium. They plan to finance it themselves, and politicians in Miami-Dade County seem to be lining up in support.

Beckham's partners in this venture also have deep pockets. They include American Idol creator Simon Fuller and Bolivian billionaire Marcelo Claure, founder of the international wireless distribution firm Brightstar Corp. And there may be other investors too. Beckham is reportedly aiming to get Miami Heat star LeBron James involved in the project as well.

This is a major milestone for Major League Soccer, a serious vote of confidence in the future of the league from one of the sport's biggest names. And it comes at a time when the level of play in the league is getting some serious gobal respect.

On top of that, MLS is no longer just a league where former top players came to retire. And it's no longer a league that loses its top American stars, who for a long time headed elsewhere in search of the best competition. Now those top US players have started to come back, in their prime, to compete in MLS.

Today's announcement in Miami, however, is just a start. The Beckham group must still secure a location to build a new stadium, and negotiations with local officials have only just started. But if a stadium deal can be reached, Miami's new soccer team could start to play in 2016.