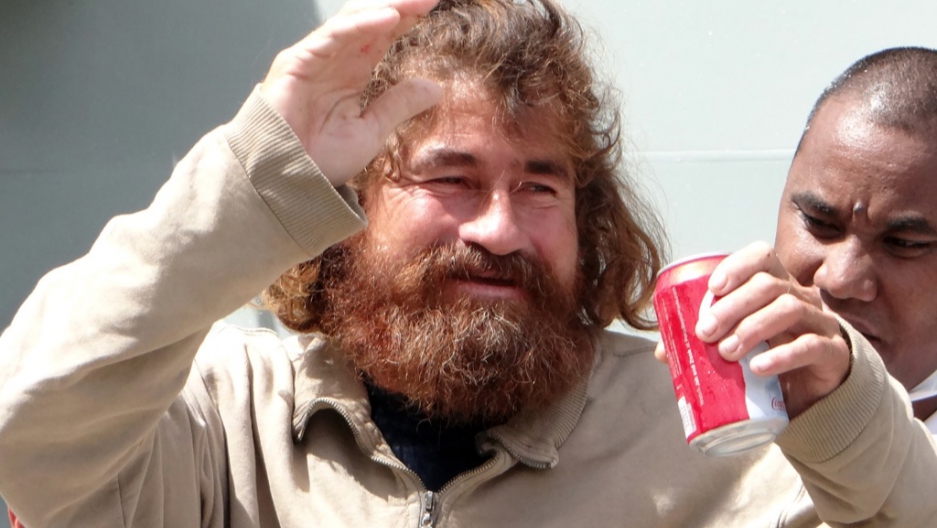 A Mexican who identified himself as Jose Salvador Albarengo says he was lost at sea for over a year.
Credit: Hilary Hosia
Share

MEXICO CITY — Awash in skepticism, officials on both sides of the Pacific are picking through the tale of a fisherman from Mexico who made land on the Marshall Islands after, he says, 13 months and thousands of miles adrift in a small skiff.

Identified as Jose Salvador Alvarenga, 37, the man says he and a teenaged companion were swept away by a storm while shark fishing off the southern Mexican coast days before Christmas in 2012.

The teen died on on the odyssey, Alvarengo told officials in the Marshall Islands (map), where he was rescued over the weekend.

He claimed to have survived on the raw flesh and blood of birds, turtles and fish that he managed to catch with his bare hands.

“I’m not sure if I believe his story,” Gee Bing, the Marshall Islands’ acting foreign minister, told The Associated Press. “When we saw him, he was not really thin compared to other survivors in the past.”

Photographs of the rescued Alvarenga show a remarkably fit-looking, light-skinned man with a bushy beard.

Marshall Island officials say the castaway’s vital signs were strong but that he was dehydrated and complained of joint pain.

The US government’s envoy there expressed disbelief.

“It’s hard for me to imagine someone surviving 13 months at sea,” Tom Armbruster, US ambassador to the Marshall Islands, told the Associated Press. “But it’s also hard to imagine how someone might arrive on [the small island of] Ebon out of the blue. Certainly this guy has had an ordeal, and has been at sea for some time.”

A native of a coastal fishing village in the Central American country of El Salvador, Alvarenga had lived 15 years near Tonala, on the coast of Mexico's southernmost Chiapas state, the Mexican foreign ministry said in a statement.

Small-scale fishermen in Mexico — who use small fiberglass boats powered by outboard motors and rarely fitted with good radios or radar equipment — frequently are reported lost at sea. Most are never seen again.

"I didn’t know the hour, nor the day, nor the date," the Spanish-speaking Alvarenga told a reporter for the Britain's The Telegraph newspaper. "I only knew the sun and the night … I never saw land. Pure ocean, pure ocean. It was very placid – only two days with big waves."

Below is a video interview posted by The Telegraph.

Incredible as it seems, Alvarenga’s tale closely mirrors that of three Mexican shark fishermen from near the Pacific resort of Puerto Vallarta who were rescued in the Marshall Islands in August 2006.

The men said they were also pulled out to sea by a storm, surviving more than nine months in their small open boat before being found by a Taiwanese fishing trawler. Two of their companions died during the ordeal, the men said.

But Joe Kissack, a US television executive who spent months interviewing the men, is convinced of their story. His book and movie, “The Fourth Fisherman,” credit the three's survival to their Christian faith and the story with changing his own life.