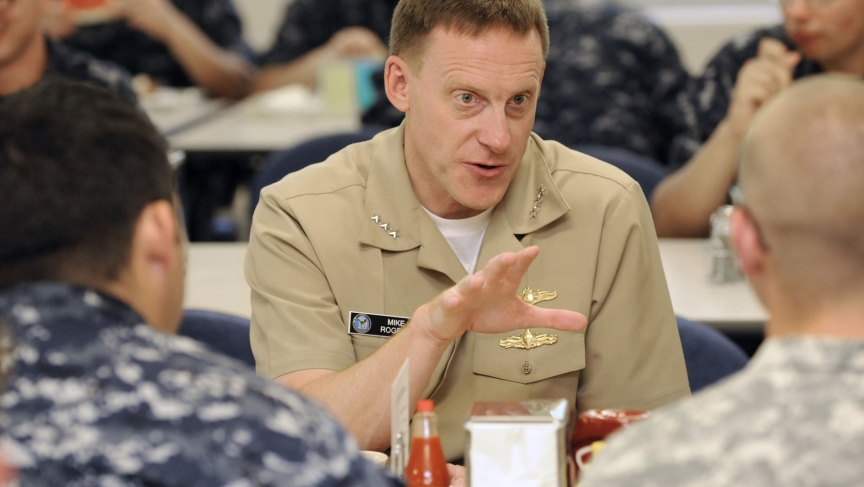 US Navy Vice Admiral Michael S. Rogers speaks with staff and students during a visit to the Center for Information Dominance headquarters in Pensacola, Florida June 13, 2013.

Imagine this want ad: New boss needed for a US spy agency currently under intense scrutiny, both at home and abroad.

Just ask US Navy Vice Adm. Michael Rogers, who happens to be President Obama's pick to be the new head of the National Security Agency.

President Obama has nominated Rogers to replace Gen. Keith Alexander at the helm of the NSA. Rogers, a cryptologist, currently commands the Navy's 10th Fleet and cyber command. He is also a former intelligence director for the Joint Chiefs of Staff.

It still requires Senate confirmation. But assuming that happens, Rogers will face a challenging task.

According to James Lewis, director and senior fellow for technology and public policy at the Center for Strategic and International Studies, says Rogers has three big problems.

The first one is moral.

"The people at the agency feel like they were doing everything right, they checked all the boxes on oversight and review and they feel under tremendous pressure for doing what they thought was their job," he says.

The second problem, according to Lewis, is what he calls "rebuilding issues."

"Snowden's leaks damaged some of the collection capabilities by revealing some technologies and programs, and he's going to have to do some rebuilding."

Lewis says President Obama has put forward ideas for reform within the NSA, but that, "saying what the path is and actually walking down it, are different."

One final question that Lewis has is this: Are the revelations stopping anytime soon?

"We all know the basic story: NSA spies on everyone all the time. Okay, got it. But I wonder if it's over," he says, adding that there's also information on foreign intelligence agencies that hasn't come out yet.

Lewis says the NSA is at a transitional moment and that the Agency has gone through similar transitions before, but they were mainly technological updates.

"[This one] is driven by the fact that people now know what the NSA does for a living and they will have to rebuild," he says.

Lewis hopes the NSA will turn out to be more flexible and more advanced in its technology.

But he says the Agency's mission isn't going to change.

Meanwhile on Thursday, Defense Secretary Chuck Hagel said in a statement that he's confident that Rogers "has the wisdom to help balance the demands of security, privacy and liberty in our digital age."

He added that he's hopeful Rogers can implement President Obama's reforms at the NSA.