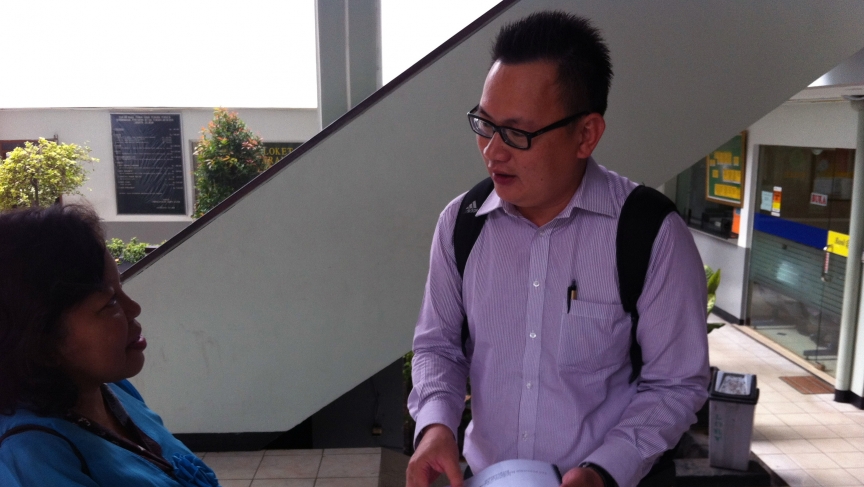 Benny Handoko discusses his Twitter defamation case with Susy Rizky, one of his supporters, after a defense hearing.

Few countries embrace social media as feverishly as Indonesia. A recent survey suggests that 80 percent of all internet users in the country have a Twitter account, the highest in the world.

Benny Handoko loves Twitter, but it’s gotten him into trouble.

He’s on trial for allegedly defaming a former national legislator named Misbakhun (like many Indonesians, he goes by one name). Handoko called him a thief in a tweet.

And with national elections coming up in April, internet activists are watching his case to see if the authorities will move to quell online dissent.

Keep in mind, Handoko is not a reporter or a public figure of any kind. He works in construction. But since signing on to Twitter in 2008, he’s amassed more than 53,000 followers, many of whom likely saw that tweet.

Every Wednesday, Handoko is at a courthouse in South Jakarta. When I meet him, he is checking Twitter on his cell phone as he waits for his trial to resume. Earlier in the day, Handoko tweeted he’d be reading his defense statement today. More than a dozen followers tweeted back to wish him luck.

Handoko faces the possibility of a year in prison for violating the country’s sweeping internet law, which was adopted in 2008.

“I know that I face some injustice. Before that, I have a perception that Twitter users can tweet our expression, as long as it’s not harming each other,” Handoko says. “And in my opinion, what I tweet is not harming this politician.’’

The politician, Misbakhun, was found guilty in 2010 of forging documents for a multi-million dollar loan. He served a year in prison before the Supreme Court threw out his conviction, amid rumors that he bribed the court.

Handoko isn’t the only person who has criticized the politician — on or off Twitter. But Handoko refused to apologize for his tweet and continued to confront the politician on Twitter. His trial is now in its fourth month, and he says it’s taking a toll on his family.

“My wife is quite anxious and worried,” Handoko says. “She’s worried that I have to serve in prison for one year. But I try to calm her down. I’m pretty confident that we should win this case.”

Other Indonesians have faced defamation charges under the internet law; 13 cases were filed last year. But Handoko’s case is among the first to be taken to court over a tweet.

His trial could have serious consequences for Indonesia’s millions of Twitter users. That’s why more than a dozen lawyers, including Febi Yonesta, have agreed to work on his case pro bono.

“This is the era in Indonesia where people have a courage to express their opinion, so we don’t want this freedom taken away,” Yonesta says.

Freedom of expression is still relatively new in Indonesia, arriving after the overthrow of the dictator Suharto in 1998. But many in the country’s political elite seem nostalgic for the old days, when few people dared to criticize them. Twitter makes dissent easy. It’s become a go-to outlet for voicing discontent with the government.

Handoko doesn’t take for granted how far Indonesia has come since the Suharto era. That’s why every Wednesday, he sits in a courtroom to defend his vision of democracy.

“I didn’t regret my tweet because I think that’s part of my participation as a citizen in this democratic country,” he says. “Part of democracy is the freedom of speech and freedom to criticize the public figures.”

Handoko should find out soon how far that freedom goes. His trial is expected to wrap up in February.