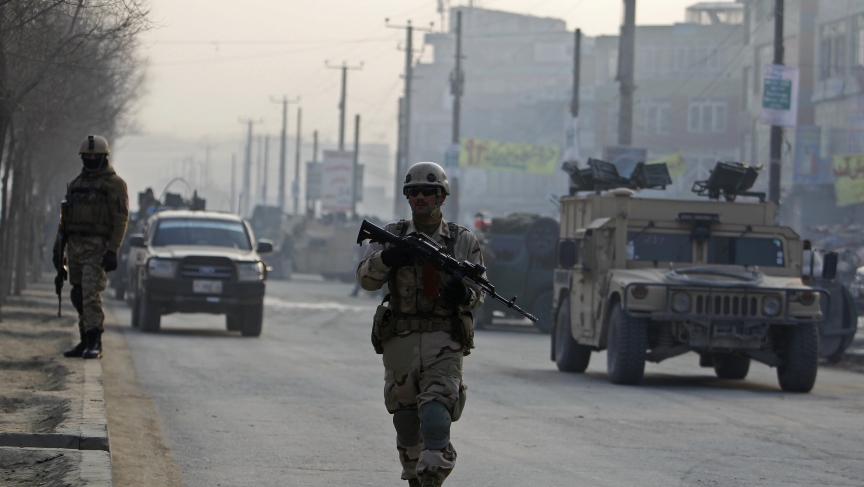 Afghan security personnel keep watch at the site of a suicide attack in Kabul earlier this week. Afghans are now in the lead in providing security throughout the country.

President Obama didn't talk much about foreign policy in his 2014 State of the Union speech. But, he did talk confidently about the war in Afghanistan coming to an end.

"With Afghan forces now in the lead for their own security our troops have moved to a support role," he said. "Together with our allies, we will complete our mission there by the end of this year, and America's longest war will finally be over."

Congress applauded loudly. But Afghans are not quite so confident.

Kathy Gannon, special regional correspondent for Afghanistan and Pakistan for the Associated Press, says Afghans have indeed taken over security, "but there's a lot of concern about their ability to fight on alone without the help of the international community."

Gannon says she's heard Afghan military sources complain about the level of training and the quality of the equipment they've been given.

The bottom line is, the Taliban have not gone away.

In fact, according to Gannon, they remain strong in some areas, particularly the south and east of Afghanistan. Indeed, she adds, they are "less conciliatory now than they were, say, last summer."

There are other problems. Corruption is endemic. And Gannon says there are warlords who remain part of the government, but are gathering strength. People are re-arming and militias are being re-formed.

The key to future stability might be the level of US and international engagement. If the Afghan government will sign the Bilateral Security Agreement, then a few thousand US, and some NATO troops, will remain in Afghanistan to provide training and support, and also to hunt down al-Qaeda remnants.

For now, Gannon says, Afghans are increasingly anxious. "People are very uncertain about what will happen after 2014," she says.