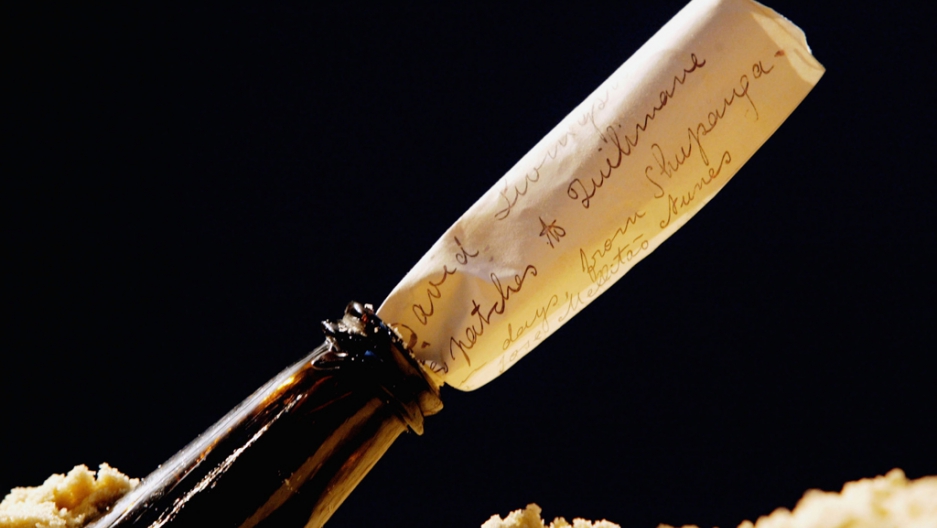 A father and son found Kipple's message in the small fishing village of Terceira, on the Azores archipelago. The message was sent from upstate New York and traveled 2,600 miles.
Credit: Graeme Robertson
Share

The world geeked out recently over a 100-year-old box of negatives recovered in Antarctica. And with good reason — they contain never-before-seen images from the 1914-1917 Ross Sea Party, which was stranded while setting up supply depots for Ernest Shackleton’s expeditions. The photos show stunning glaciers, old-timey facial hair and, in some cases, both at the same time. In honor of lost things found, here are nine recent stories of mysterious messages discovered in bottles or delivered from beyond the grave.

1) An SOS from a melting glacier

In July 2013 two Canadian scientists in a remote part of the Canadian Arctic found a handwritten letter in a bottle. It was placed under some rocks in 1959 by American geologist Paul T. Walker, who died later that year. The note recorded the distance to a nearby glacier and asked “anyone venturing this way” to remeasure the distance. The two scientists, Warwick Vincent and Denis Sarrazin, took Walker up on the offer, and found that the ice had retreated 233 feet. They’ve since reburied Walker’s message for future researchers to find. Vincent notes, “It’s a story about climate change, but it is also a story about the incredibly brave and strong men who worked in this extreme high Arctic environment in the 1950s — back before GPS and sat[ellite] phone technology."

2) 97 years: Officially the oldest letter-in-a-bottle ever

The most hardcore message-bearing bottle spent a record 97 years and 309 days lost at sea. In 1914, Captain C.H. Brown released a scientific drift bottle to map oceanic currents for the Fishery Board for Scotland. In 2012, a Scottish fisherman found it just nine nautical miles away. Only 315 of the original 1,890 bottles have been found. Each time one is located, Captain Brown’s log book is reportedly updated. By sheer coincidence, the previous world record was set in 2006 by the fisherman’s friend — using the same boat. [Note: There may be a new contender for “oldest bottle ever.” In September 2013 a British Columbia man found a message thrown overboard by a steamship passenger in 1906. But the bottle still hasn't been authenticated or uncorked.]

3) Three men and a grave in Durham Cathedral

In September 2013, English stonemasons found a mysterious bottle in the floor of the Galilee Chapel in Durham Cathedral. Inside was a Globe Theatre flyer with three names scribbled on the back and a message: “This grave was opened on May 13, 1913.” Experts are now using church records to figure out what happened. Although the bottle was found near the Venerable Bede’s tomb, staff believe his remains are undisturbed.

In 1990, a British schoolgirl threw a bottle into the North Sea with a note: "Dear finder, my name is Zoe Lemon. Please would you write to me, I would like it a lot. I am 10-years old and I like ballet, playing the flute and the piano. I have a hamster called Sparkle and fish called Speckle." A couple in the Netherlands found her message in December 2013 — 23 years later — and responded.

In September 2013, Peggy Smith-Eddington received war medals and a letter from the father she never met, 70 years after he wrote it. Smith was born in 1944, just as PFC John Eddington was preparing to deploy. He sent his newborn daughter a letter telling her that he loved her. He died a few months later, but Smith never saw the letter. In 1999, a Missouri woman found the letter and located Smith after a 14-year search. A ceremony to deliver the items honored the soldier’s death with a 21-gun salute and taps.

It is a truth universally acknowledged that a French emperor who’s been dead for 192 years cannot collect his mail. But on Dec. 2, 2013, the French government sent a census form to “Napoleon Bonaparte” at the emperor’s birthplace at 3 Rue Saint Charles in Ajaccio, Corsica. The person now living at that address rejected the letter with this helpful note: “Died in 1821 — please forward to Saint Peter.”

In 2001, 10-year-old Sidonie Fery wrote: “Be excellent to yourself, dude,” a line from the film Bill And Ted's Excellent Adventure. She jotted down her phone number, then tossed the bottle into Great South Bay in Long Island. Sidonie died in an accident nine years later. In 2012, workers cleaning up after Hurricane Sandy found her bottle and called Sidonie’s mother, who’d kept the same number since 1977. She says: “It felt like discovering buried treasure. ... It was a beautiful message for a mother to get.”

"We're sitting in our balcony pondering. Is it better to love or be loved? Your answer will be appreciated. Call us or write to us." An Australian woman wrote this message in March 2009, then tossed it off her cruise ship in Indonesia. The bottle traveled more than 5,600 miles — across the Indian Ocean, past Madagascar, to Mozambique. More than a year later, a woman called her from KwaZulu-Natal, South Africa: "I found your bottle. It's better to be loved. But to be loved you must love."

9) Love letters from a 6-year-old girl with cancer

This will probably be one of the most beautiful stories you’ll ever hear. Six-year-old Elena Desserich was diagnosed with brain cancer in 2006 and passed away 255 days later. After her death, her parents began finding hundreds of notes Elena had hidden around the house for her family to find: in bookshelves, between plates, in drawers. Listen to her dad describe the experience in this 6-minute clip from NPR’s Snap Judgment podcast.