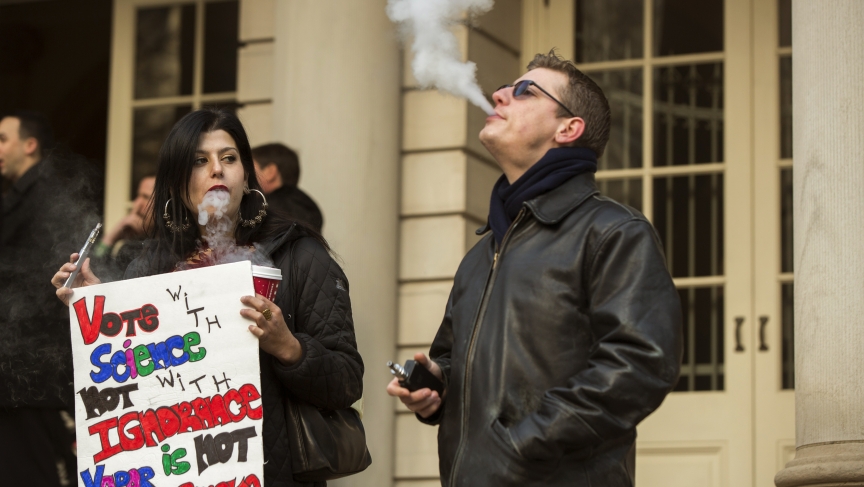 Vapor rights activists exhale vapor from their e-cigarette before attending a city council meeting that will address the legality of indoor use of the devices in New York on December 19, 2013.

For the first time since 1970, a new kind of cigarette ad has found its way onto TV screens in homes across the country. It features an actor blowing out a cloud of vapor and telling consumers they don't have to smell like an ashtray anymore, if they're smoking an e-cigarette.

In a sleek, rechargeable metal tube, e-cigarettes offer a hit of nicotine without the tar, smoke or other harsh chemicals associated with the real thing. There’s no federal law regulating where e-cigarettes can be smoked, but some places, like New York City, are banning them anywhere smoking is prohibited.

So where can you smoke e-cigs? E-smokers are now taking refuge in “vape bars,” where you can walk in, take a seat at the counter and allow a “vapologist” to guide you through the chalkboard full of hardware and flavors: Disposable or rechargeable? Bubble gum or Cinnabon? The options are endless. The Henley Vaporium, a vape bar co-owned by Talia Eisenberg and Peter Denholtz in New York City's Soho neighborhood, is such a place.

"It's a different experience of bringing people together, and it's a healthier experience," says Denholtz, who smoked for 35 years before switching to e-cigarettes. "I'm happy to have a better way to put nicotine into my body."

Denholtz adds he doesn't encourage non-nicotine users or people who have never smoked to start up, but he views e-cigarettes as a healthier alternative for those who suffer from nicotine addiction. For the 45 million smokers in the United States, the switch to e-cigs could mean vast improvements for their health.

But what about the health of the teens who have never smoked before? Or the health of ex-smokers who haven’t taken a puff in years? And what’s in these e-cigs anyway?

According to the Centers for Disease Control and Prevention, “significant questions remain about how to assess the potential toxicity and health effects of the more than 250 electronic cigarette brands." There are also questions about how e-cigarettes should be both advertised and regulated.

Michael Eriksen, founding dean of the School of Public Health at Georgia State University (GSU) and former director of the CDC’s Office on Smoking and Health, says no one knows what to expect from the proliferation of e-cigarettes.

Under Eriksen’s leadership, GSU recently received a $19 million grant from the Food and Drug Administration to study why people choose to try e-cigarettes and what using them really means for the body.

"You have a bit of a conundrum. E-cigarettes are, almost without exception, safer to use for a smoker than traditional smoking, but that doesn't mean they're safe. That's what the concern is. People will use e-cigarettes on an increased basis, [leading to] more exposure to nicotine among kids and possibly ex-smokers," he says.

Eriksen says while e-cigarettes look like medical devices, they're considered to be tobacco products because they contain nicotine, which is derived from tobacco, even though e-cigarettes contain no tobacco. He adds that, while nicotine itself is not benign, it is much better than cigarette smoke, which is the main reason why traditional cigarette smoking can lead to illness and death.

According to Eriksen, the ideal e-cigarette user is a current tobacco smoker that is having difficulty quitting on their own. He says e-cigarettes can be a tool for tobacco smokers to eventually kick their nicotine addiction.

"We certainly don't want people who are not using nicotine — like teens or non-smokers — to start to use nicotine," Eriksen says. "It is a stimulant, and in larger doses, it is toxic. Nicotine is extraordinarily addicting and still of concern."

He says e-cigarettes are creating, once again, an allure and prestige around the act of smoking.

"Not only is it glamorizing, and in some ways sexualizing, e-cigarettes, there is a concern that it is going to renormalize smoking," he says. "A lot of the progress we've made around the world is to denormalize smoking, from it becoming a popular and attractive thing to do to, in some ways, a deviant behavior. The way e-cigarettes are being marketed, it really may have the effect of making not only e-cigarette use, but smoking in general more desirable."

Eriksen and his team plan to investigate how people make a decision to smoke either traditional or e-cigarettes, in addition to the factors that lead people to stop smoking completely.

"The data is showing rapid and incredible market penetration, both among adults and among teenagers," says Eriksen of e-cigs. "The latest data from the CDC has shown that the usage of e-cigarettes among high school students [has] doubled between 2011 and 2012. Now, about 10 percent of high school students report having tried e-cigarettes — this is at a time when traditional smoking of cigarettes is at the lowest levels in a generation. What we're seeing among youth is less cigarette smoking and more use of e-cigarettes."

Eriksen estimates that about 8 percent of all US adults have tried e-cigarettes, though about a third of smokers have tried them.

"There's been really remarkable uptake of e-cigarettes over the last few years," he says.