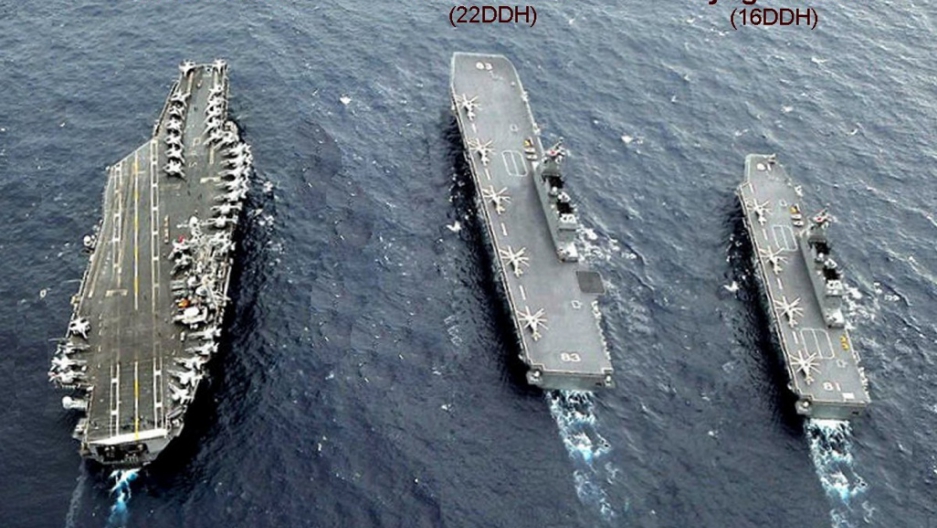 NEW YORK — When China commissioned a refurbished Soviet aircraft carrier into its navy last September, the appearance of the 67,000-ton Liaoning made headlines around the world.

It’s not considered much of a threat to the US Navy. The quarter-century-old ship is barely half the size of the latest American super carriers.

But it did mark China’s expansion into naval aviation’s offensive realm. Added to its assertive demands for sovereignty over vast areas and islets off its coastline, this has many worried that a potentially dangerous naval arms race has taken hold in Asia.

Japan now has responded with the inevitable: Izumo, the largest warship the Japanese navy has built since World War II.

Japan has forsworn offensive weaponry since the war.

Officials have denied the Izumo, and a sister ship to be launched in three years, are aircraft carriers at all. They instead dub them “helicopter destroyers,” not much different from a smaller, older ship (the Hyuga class) that’s been in service for a decade.

Tokyo also stresses the utility of such ships as relief and rescue vessels in the wake of disasters like the 2010 tsunami. Indeed, the Izumo has a 35-bed hospital on board and water purification facilities that could supply a small coastal city in such emergencies.

Courtesy of US Navy

But naval experts are skeptical.

They say Izumo is capable of quick conversion to a launch platform for attack drones or for new US vertical takeoff fighters.

“There are no obvious technical obstacles to the Izumo carrying F-35Bs fighters,” writes Kyle Mizokami, a defense analyst for the US Naval Institute. “Some improvements the Izumo sports over the previous Hyuga class — such as moving defensive armament off the flight deck, and moving an elevator behind the island — support theories involving fixed-wing aircraft.”

China’s Defense Ministry responded with a statement calling on Japan to “reflect on its history, adhere to self-defense and respect its promise to follow the road of peaceful development.”

In fact, both nations long ago ceased practicing what they preach.

China’s “peaceful rise” doctrine belies double-digit increases in the rate of military spending over the past decade. It’s also inconsistent with the Chinese naval forces’ frequent bullying of Japanese, Vietnamese, Philippine and other vessels that stray too close to an array of islands that are the subject of territorial disputes.

Late last year, China declared an “air identification zone” across a huge area of the East and South China seas, saying that aircraft entering the area would be required to identify itself to Beijing’s air controllers.

That prompted the US to fly two unarmed B-52 bombers through the zone unannounced in a move largely read as a brushback pitch.

Japan has been less provocative, but many Japan analysts say its constitutional ban on offensive military capabilities has frayed to the point of irrelevance.

The government of Prime Minister Shinzo Abe has made no secret it intends to reclaim its role as a “normal power” in Asia.

Abe stoked historical anger by visiting the Yasukuni shrine in December, where Japan’s war dead — including many whose war crimes in occupied China and other lands are legend — are buried.

Since the new year, Tokyo has said it would officially “nationalize” some 280 tiny rocks and islets in its territorial waters, a move that drew predictable barbs from China.

GlobalPost Q&A: War between Japan and China is an accident waiting to happen

Abe also has announced the creation of a Japanese national security council to advise on defense matters. He submitted a 2014 budget that increases Japan’s military spending — already the fifth highest in the world — by 3 percent (though China’s own far larger budget is expected to grow by more than 10 percent).

As military matters take precedence in the relationship between the world’s second (China) and third (Japan) largest economies, the United States has tacked between diplomacy and public shows of support for Japan and other smaller Asian countries fearful of China’s rise.

The Obama administration’s vaunted “pivot” to Asia brings chuckles of laughter in regional diplomatic circles as the US government finds itself still bedeviled by events in the Middle East and mired in partisan gridlock at home.

But many analysts see dangerous parallels between what’s happening in East Asia — an ambitious rising power (China) challenging the status quo power (the US and its allies) — and the dynamic that fueled a naval arms race between Imperial Germany and the British Empire in the years before World War I.

More from The Unraveler: 2014 and the hundred years war

Such musings may or may not have relevance to today’s East Asia frictions — certainly the Chinese would argue they do not.

In the wake of Pearl Harbor, in December 1941, Japan’s Adm. Isoroku Yamamoto famously worried that the attack may have awakened a sleeping giant.

Both China and Japan might learn from that thought.