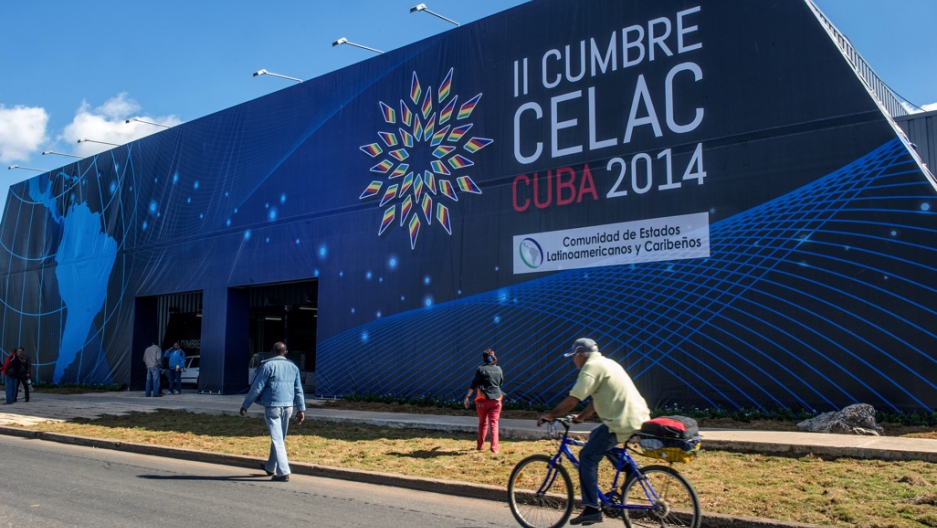 The complex where the Summit of the Community of Latin American and Caribbean (CELAC) will be held in Havana.
Credit: Yamil Lage
Share

They are black belts at global affairs, ju-jitsu artists at foreign embassies and grand masters of the geopolitical chess table.

How else to explain the feats they’ve been pulling off lately?

For a country with 11 million people and a bathtub-size economy, Cuba has long played an outsize role in world affairs. But in recent years its diplomats have been increasingly savvy at keeping the country afloat — holding off international creditors, drumming up state business and deepening ties to deep-pocketed friends.

Cuba’s foreign affairs talents will be on center stage this week when heads of state and top officials from 33 countries meet in Havana for the second gathering of the Community of Latin American and Caribbean States (CELAC), a new organization that brings together every nation in the Americas except the United States and Canada.

Certainly the island has made some major screw-ups lately — like trying to hide a shipload of weapons to North Korea through the Panama Canal under sacks of sugar. But for the most part, Cuba’s Foreign Ministry has been on an impressive run.

Here are some of their recent hits:

1. From outcast to host with the most

The Castros’ 1959 Cuban Revolution made their country a Soviet satellite and a pariah state in the Western Hemisphere. The Organization of American States (OAS) kicked the island out in 1962 at Washington’s insistence, and every Latin American country but Mexico broke off relations at one point.

Now, CELAC’s rotating presidency means Havana, and 82-year-old Raul Castro, are this year’s summit hosts. That symbolizes how far Cuba has come since the old days.

Founded in 2011 with the backing of late Venezuelan leader Hugo Chavez as an alternative to the Washington-based OAS, its gathering in Havana will be especially notable given that the next OAS-sponsored Summit of the Americas remains unscheduled and in doubt.

At the OAS’ last summit in April 2012, in Cartagena, Colombia — yes, the one with the Secret Service prostitutes scandal — member states voted to revoke Cuba’s expulsion and displayed uncommon consensus in insisting the island shouldn’t be excluded from any future gatherings. Even close US allies like Colombian President Juan Manuel Santos and Chile’s Sebastian Piñera stood with Havana. It was a clear setback for Washington’s long effort to get other Latin American nations to pressure Cuba on human rights and democratic reform.

2. Shaking the hand that embargoes you

Raul Castro's hand-to-hand contact with President Barack Obama at South Africa’s Nelson Mandela memorial got the headlines, but more significant, the Obama administration has signaled it may be willing to give a little ground on history’s longest unilateral trade sanctions, the Cuban embargo.

A senior US diplomat visiting Havana last month for talks on migration said "substantial progress" was made and that Washington was "very open" to repairing its relationship with Havana if communist authorities are willing to budge on political reforms.

Castro has repeatedly said he’s open to discussing “any issue” with the United States but that the island’s socialist system wasn't up for negotiation. Cuba watchers are now waiting to see if Obama makes any moves during his final two years in office, such as further easing travel restrictions or taking Cuba off the government’s "state sponsors of terrorism" list.

Spain's foreign minister said this month the European Union is considering a move to expand trade relations with Cuba. This is a notable diplomatic achievement for Cuba on two levels.

One, because many European businesses based in Cuba are constantly grumbling to their own diplomats about how they aren't getting paid on time — or at all — by the Cuban government.

And two, because a 2012 car crash that killed two Cuban dissidents involved two European activists, Spaniard Angel Carromero and Swede Jens Modig. Carromero was convicted and sentenced to prison, but he was allowed to serve his term in Spain, and has gone on to allege that Cuban agents were to blame for the fatal wreck and duping the world through an elaborate cover-up.

Rebels train in 1966 in Angola during the Angolan War of Independence. Cuba launched a large-scale military intervention there in support of the rebels. STF/AFP/Getty Images

Through the 1970s and 1980s, Cuba was seen as Latin America’s meddling conspirator, arming left-wing guerrillas and exporting its revolution. Now Havana is helping to end the long-simmering civil war in Colombia, Washington's ally. The Cuban capital is bringing together FARC rebels and Colombian government negotiators for ongoing peace talks that have made more progress than any previous attempt at armistice.

Cuba said this week it would call for CELAC nations to designate the region a “zone of peace,” though it’s hard to put much stock in this type of declaration given that a recent survey shows 43 or the world’s 50 most violent cities are in Latin America.

Cuba’s debt load got a lot lighter last year when Russia announced it would forgive 90 percent of a $32 billion tab.

That followed an offer by Mexico to waive $341 million in outstanding debts, and relief or restructuring agreements from China and private Japanese banks, showing once again Havana’s talent for wiggling out of its financial straits.

With more than $600 million in Brazilian loans, the Castro government is building a mega-port project in Mariel aimed at making the area the island’s new economic hub, including a Chinese-style special economic zone where the rules of Cuban socialism won’t apply. Brazilian President Dilma Rousseff is expected to help Raul Castro cut the ribbon while she’s in town for CELAC, opening the Caribbean’s biggest deep-water port for business.

But Havana has made progress moving its eggs out of the fragile Caracas basket.

Now Cuba is world famous for so-called doctor diplomacy, sending medical personnel on what officials call "missions" to some 60 countries. But it's also parlayed the reputation into a successful business. Cuban doctors are increasingly being hired out by the government to work in wealthier countries that have a shortage of health professionals, like Algeria, Saudi Arabia, Qatar and other Gulf States. Since the massive street protests in Brazil last year, President Rousseff has hired 11,000 Cuban doctors to treat patients in its poor slums and remote Amazon outposts.

The Cuban government pays the doctors a fraction of the earnings, and while some defect when they go abroad, most remain in their posts.

Cuba and Mexico have a special relationship, stretching back long before Mexico allowed Fidel Castro to launch his revolution from Mexican soil. Ties frayed after the Cuba-allied Institutional Revolutionary Party (PRI) lost power to conservative President Vicente Fox in 2000, drawing Mexico closer to the United States.

Havana-Mexico relations hit a low point in 2002, when Castro publicly released a phone conversation he secretly recorded with Fox in which the Mexican president tells him "comes y te vas" (you eat, then leave), presumably to avoid upsetting the US at an upcoming summit.

The phrase became a long-running joke in Mexico.

Now, more than a decade later, Mexico views that estrangement as a mistake. In 2012, then-President Felipe Calderon paid a state visit to Cuba. Now President Enrique Pena Nieto plans to visit, too, and Mexico once more looks eager to engage Havana and display its foreign policy independence from Washington.