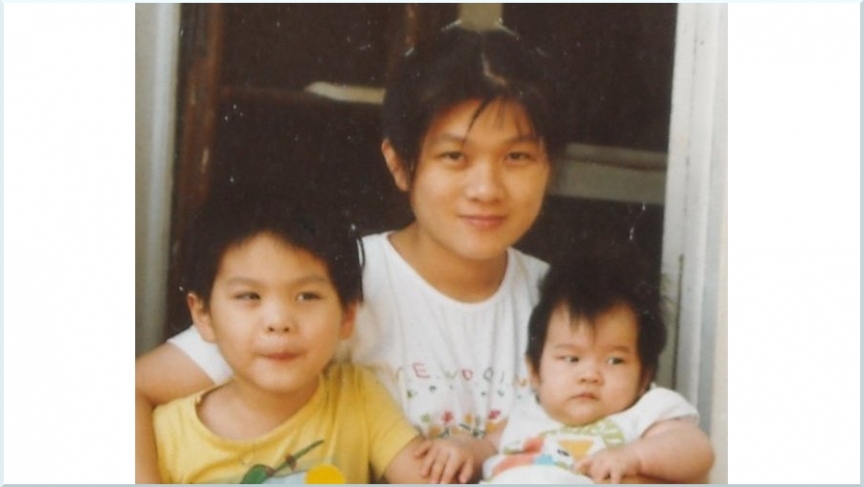 Eugenia Lee (right) with her mother, Ling Shieh, and her brother in Queens, New York in July 1989.

Eugenia Lee is a second-generation American. Her parents, Shwuling Shieh and Jerder Lee, immigrated to the United States from Taiwan in 1984.  Lee is also an anthropologist, and she interviewed her mother about her first days in the US. Lee has shared that interview with us, adding to First Days, an ongoing series that collects stories like these from immigrants.

An anthropologist I once met in Nairobi, Kenya, told me that the most important thing we can do in our line of work is have a strong understanding of who we are and where we’re from. So, when the opportunity came to do an oral history, my interviewee choice was clear: my mother. I chose this interview for a few reasons — as a daughter who wants to better understand her mother, and as a professional about to move to another country and eager to learn more about what that experience would be like.

Just wrote the next part of my oral history blog posts: my mother's first days in the US. http://t.co/krx6WH8IYB cc @angshah @ohkarolle

(This transcript is edited for clarity and length. See the original transcripts and Eugenia Lee’s complete interview with her mother on her blog.)

Eugenia Lee: Why did you come to America?

Shwuling Shieh: Taiwan is very small. As long as you do okay academically, you’ll think there’s a future elsewhere. You’ll want to come to the United States for more education. Everyone thought, “As long as I get an education. I return to Taiwan and I’ll do well.” That’s just what people used to think. If you got a degree and went back, you did better than everyone. So when anyone got a chance, they wanted to leave.

I was working for two years before I left the country. I-20 is when you get a school application. It’s [an immigration-eligibility form] related to education. Then you left the country. After that there were different visas. And once we got there, I counted as an F-1, which is [a visa] for students. Then your dad is my spouse, so he used F-2 to come, because he hadn’t gotten into a school yet. He got here and applied directly to schools.

At the time it was like this. The amount of money we made was enough for us to get by, you know? The money wasn’t a lot but at the time we weren’t doing much besides raising kids. That’s why I wonder why people today have such a hard time getting by. We didn’t really have a job. Those jobs were [for] cash. You see, your dad and I got by like this for so long.

What did you think the United States would be like?

I had no idea what America would be like. I was a little scared, but my two older brothers were here and I had so many relatives here. When they knew of jobs, they would let me know.

When I came, I thought I was going to go back to Taiwan. But once you get here, you start to think, “Here isn’t so bad. There are opportunities.” Because you know, Taiwan — no matter what, it’s small. There are fewer jobs. At the time it was 40 臺幣 (New Taiwan Dollars) to a dollar. Now it’s 30. You know? That was a lot of money! If I made $4 in an hour, I had 160 臺幣 (New Taiwan Dollars). Four times! Also, I didn’t even need to work full-time.

Did you speak English before you came to the United States?

From a young age, my English wasn’t too bad. I’m just very shy, I’m afraid to speak English. But your dad’s English isn’t good and he’s not afraid to speak it. When I came I was just 24. It’s pretty young, compared [to others]. And when I got here, everything was good. You know, our attitude is that everything is okay. Some people worry and think, “Oh, what do I do? I can’t make it.” I didn’t. Your dad and I found it exciting. Really. Despite our lives being very exhausting because we had no money.

But, anyway, we really relied on ourselves. When we got here we didn’t bother anyone for help. We didn’t say, “Give me money every month.” Some people do this — it happens in Taiwan. They say, “I’m the brother, I’ll take care of the younger one.”

Have your dreams been fulfilled?

In general, coming to America, we have no regrets. We really had a great opportunity. A lot of people get depressed. People we knew in college and graduate school really went crazy. They couldn’t finish in school. They got lonely. A lot of money problems. But, I think, if you can’t survive during the process you shouldn’t have come. So you really need to know, if you can’t do something you need to give up some things. Like your dad and I gave up some things, right? We gave up a lot.

But when your dad and I came to the US, from the very beginning we didn’t get any support. So you start to think. Sometimes I say, “Forget it. I don’t need to go out to eat.” Because I want to save money for the future. And now I know, I don’t need to do this anymore. But I still don’t like going out to eat (laughs). I’m just very careful about what I buy. But I love going out and traveling.

PRI’s The World, inspired by the South Asian American Digital Archive's First Days Project, is looking for your stories about your first days in the United States — or those of your parents or grandparents. Share by commenting here, using the hashtag #firstdays on Twitter or Facebook, or by pressing the record button below and speaking into your computer’s microphone.

[View the story "First Days: The Joys and Challenges -- and Surprises -- of Coming to America" on Storify]