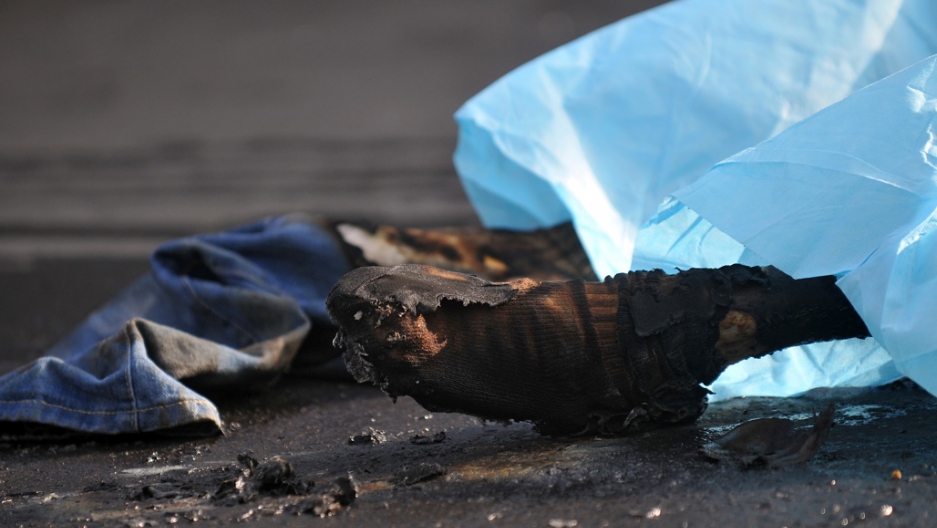 A Guatemalan mob lynched this man suspected of being a hired assassin.
Credit: Johan Ordonez
Share

As he carried out maintenance work in a cemetery in the Santa Cruz region of eastern Bolivia, five irate men visiting one of the tombs mistook the 54-year-old for a grave robber and decided to take justice into their own hands.

Moreno was tied up, beaten to a pulp and declared dead on arrival at the hospital.

His murder last November is yet another case in a worrying lynching trend in several Latin American countries, above all Bolivia, Guatemala, Mexico and Peru.

Statistics are hard to come by. Neither Human Rights Watch nor Amnesty International tracks lynching, or, as it’s often known here, “justicia popular.”

But Griselda Sillerico, of Bolivia’s official human rights watchdog, estimates some 70 lynching attacks were reported to authorities in the Andean nation last year, with around 30 victims dying.

One country that does have hard data on the practice is Guatemala — possibly because it’s thought to be the only nation in Latin America that tops Bolivia’s grim lynching numbers.

According to the Central American country’s human rights prosecutor’s office, 47 people died (see table 3 of this report) and another 441 were hurt in lynchings in 2013.

Perhaps most worrying, those numbers are up roughly tenfold since 2004.

“We are asking the population not to be led by rumors, and, when there is a mob, to stay well away,” says Mildred Luna, who oversees a lynching prevention project in Guatemala’s justice department.

Carrying out — and in some cases just planning — a robbery or theft are the most common alleged crimes that result in lynching, although alleged pedophiles, rapists and murderers are also often targeted.

“There is a macabre ritual in which the suspect is dragged to the town square, where the lynching takes place,” says Fredy Torrico, public prosecutor for Cochabamba, in central Bolivia, one of the departments where most lynching occurs. “It often ends with the person being burned alive or hanged.”

But death usually only comes after the mob has first abused the victim for hours, often stripping, beating or whipping him or her.

During the process, the victim is frequently tied up, sometimes with barbed wire.

Lynching is notoriously hard to prosecute. Torrico says his office is still investigating 12 fatal lynchings that occurred in 2013 but has yet to secure any convictions. He acknowledges that only a “minimal” number of lynchings are ever resolved in court.

“There are usually many people involved, including the instigators and the perpetrators of the act,” he says. “Once the lynching is over, everyone disappears and there is a code of silence. The community closes ranks.”

Sillerico adds: “The whole community becomes complicit through its silence. It is very hard to break through and there is usually no sanction.”

Although lynching a violent criminal is illegal and horrifying in its own right, even more troubling is the fact that many victims, like gravedigger Moreno, are innocent.

In one grotesque case in Peru, a local prosecutor’s son, who was on a break from his medical studies in Russia, was beaten and burned to death after being wrongly taken for a thief.

In another, in Bolivia, a mob buried three brothers alive following the choking death of their drinking companion, apparently believing the brothers had killed him.

Critics say it’s no coincidence the trend appears to be most deeply rooted in Bolivia and Guatemala, possibly the two Latin American nations with the highest proportions of indigenous citizens.

Yet many experts believe lynching has nothing to do with native or traditional justice anywhere in Latin America, which rarely includes death as a punishment.

The real cause of lynching, they say, is the authorities’ failure to deliver justice. Both the courts and police in all four countries where lynching occurs regularly are widely accused of ineptitude and corruption.

Meanwhile, indigenous justice tends to focus on righting the wrong committed by the criminal, often through manual labor. In extreme cases, a community might also expel an offender.

“The population has lost confidence in the police,” Sillerico notes. “An institution that systematically violates human rights has no credibility.”

Adds Torrico: “When a crime is committed, such as a robbery, there is often no response, or a slow and ineffective response, from the authorities, and the crime is never resolved.”

In some cases, the police are even present at the lynching yet fail to stop it.

“It is not that the police permit lynchings,” says Luna, of the Guatemalan justice department. “But sometimes they are just completely outnumbered.”

One of the sources of the controversy about lynching and native justice is Bolivia’s judicial reform to allow “traditional” justice among indigenous communities. That was launched in 2009 by Bolivian President Evo Morales, himself an indigenous Aymara former coca grower.

But even Bolivia’s new legal system only allows indigenous justice to handle relatively minor crimes. Murder, rape, and armed robbery all must be dealt with by regular courts.

Yet until police, prosecutors and judges win back the communities’ trust, experts say, more alleged criminals — many of them having nothing to do with the offenses they are accused of — are likely to meet horrific deaths at the hands of enraged lynch mobs.